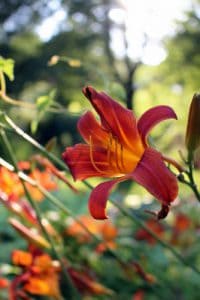 Despite the fact that I am horrible at caring for them, I like plants. Really. I think they look nice in offices and in homes and add to a space’s overall feel. Outdoors or indoors, plants rock. I really don’t have anything against plants. It’s just that I don’t think I could ever own one again knowing what I accidentally did to a house tree Tom’s had for the past six years. Big oops. I swear I didn’t mean to kill it! Anyone have a copy of Gardening for Dummies?

(Oh, and those flowers to the right? They’re wild, healthy ones at the park. Thought I’d start off on a positive note!)

Read on for more about why I don’t garden!

Have you ever been really impressed with others’ talents? Maybe someone you met who’s a killer photographer or dancer or singer — or for today’s post, a really knowledgeable gardener? Well, here in France, I don’t know any gardeners and figured that repotting a tree was an easy enough feat that I wouldn’t need to consult Lord Google or YouTube or a book like Gardening for Dummies for any advice.

Well, I was wrong.

It all started before I met Tom. He bought a small tree from Ikea to decorate his bachelor pad and it’s grown into a six foot tall tree that’s withstood desert-like conditions (Tom going on vacation and forgetting to give it extra water during his two-week absence), extreme heat in our apartment without A/C, regular droughts (when we forget to water it) and overall abuse from two people who have no clue. (Gosh, this sounds so bad.)

In any case, it always fluffed back up after a good drink. And it had been around for six years!

Anyway, the plant had been turning kind of yellow and sickly, and despite the fact I’d been watering it regularly, I figured that a six foot tree shouldn’t be in a pot that’s 10 inches in diameter. I’m no expert, but that seemed a bit small. So, like any good wannabe gardener would do, I lifted the plant out of the pot to see what the roots were doing and they were wrapped around so tightly that they were nearly strangling themselves trying to grow through the pot. 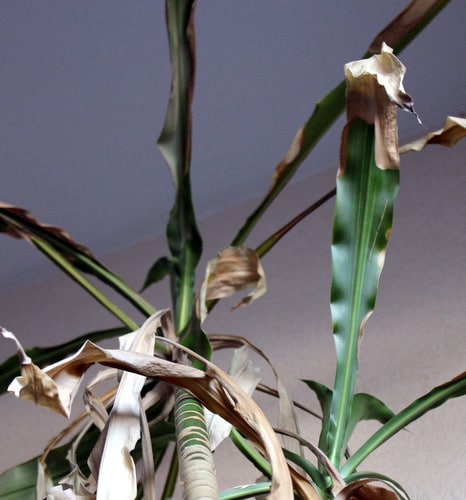 I started caring about the tree and went out to buy potting soil and a big new pot for it. I assumed you just put in some new soil, stick the tree and root ball in there, and add some new soil on top and voila. Throw in some water and we’re good. The roots would then spread out and live happily ever after.

No. Not at all apparently. I think that was the worst thing I could have done.

Well, three days after repotting it, the tree actually looked worse. So I turned to the internet. Apparently, you’re supposed to break up the root ball a little and spread apart the mess before repotting. Did I do that? Nope. You’re also supposed to cut into the root ball and cut off the dead roots from the bottom. Did I do that? I’ll give you one guess. Frantically at this point, I uprooted the goner of a tree and hurriedly tried to save it following the internet instructions. I repotted it and waited.

And waited some more.

But after a few days, it looked even worse. And now it’s officially dead and sitting in the corner of our apartment as you can see in the pic below. I don’t even think Gardening for Dummies would have helped me. 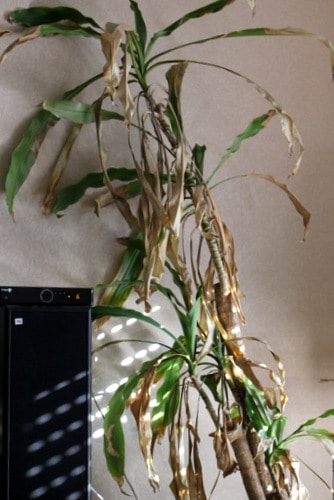 This, folks, is why I don’t garden.

Every time I walk past this poor shriveled up tree, I feel bad.

Where did I go wrong?

We haven’t taken it to its final resting place (the dump) yet, and I swear I had no idea I’d feel so bad about killing a tree. Would you believe me if I told you I’ve audibly said sorry to it? Multiple times?

Tom thinks it’s hilarious (hilariously sad) that a tree he neglected for years actually lived for years but was killed by his wife while she attempted to help it. I was actually looking forward to caring for some of the plants in our new backyard (when we move, that is). But now I think I might have nightmares.

It’ll be a long time before I buy another plant. Can you blame me?

What’s your worst Gardening for Dummies moment? Tell me below!

It’s summer and my backyard is blooming

My Christmas crafts to spread that holiday cheer

« What I’ve learned from a year of blogging
Les Soldes in France: Where to shop this July »