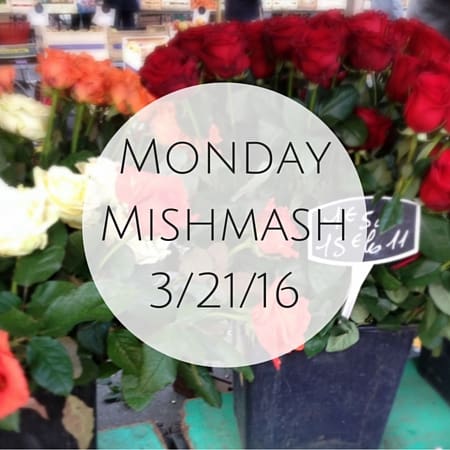 Salut mes amis, spring is in the air! I always get excited when I check my iPhone and see a sunny forecast for the entire week because pretty much all winter it was rain, rain and more rain. All that sunniness brightened up my week quite literally last week, and despite a few windy days with clouds, the sun seemed to be here to stay. Will it continue? I can hope. What else is going on?

Let’s get to today’s Monday Mishmash!

I think I need to start a new column. As you know, my husband Tom is French and speaks English really, really well (thanks to my help, duh!). So it’s only normal to tease him when he makes a funny mistake.

Let it be known that this is all in good fun — I’d never make fun of someone who was clearly struggling with a language. That’s just not cool. But because Tom speaks English pretty much like I do, I had to bust on him for this Tom-ism of the week:

We were watching TV and Tom wanted to reference something said by a woman with red hair. He confused “a ginger” with “a redhead” and said, “Yeah, but if you listen to what that gingerhead was saying…” Hahahha. Love him.

What’s going on in your part of the world?

« The amazing France yogurt culture (plus my faves!)
Annoying things expats do »