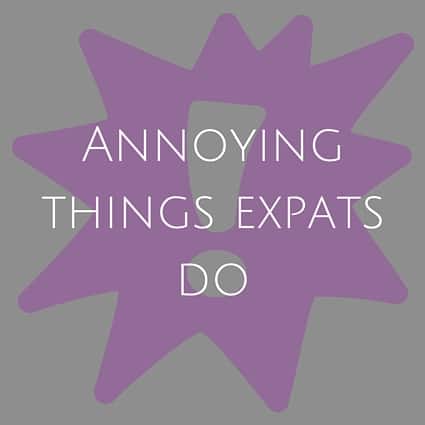 No one out there is perfect and sometimes in stressful, new and confusing circumstances, we’re even less perfect versions of ourselves. As expats, we’re probably annoying from time to time to those back home, to those in our new country and even to those we live with (*cough, cough*). Here are the top 6 annoying things expats do.

I’m not immune to the things on this list. I’m sure I’ve done a few of these annoying things at least once … just sayin’.  But at least I’m aware of it. That’s the first step toward recovery. 😉

Some of the most annoying things expats do:

1. Say things like “Back home in xyz country, we never…”

Statements like the one above where you offer commentary on how something relates to your home country don’t always go over well. If you’re not careful, your seemingly harmless comparisons can come across as criticism. And do it too much? You may turn people off. Natives in the country you’re in have probably replied with something to the effect of “OK, but you’re in France now and it’s different here.” Noted. We’re not trying to be annoying; it’s just our way of relating and making sense of what we’re experiencing. I bite my tongue when I’m temped to say “in the USA…” unless specifically asked.

2. Make no effort to even learn the basics of the new country’s language

I HATE THIS ONE! Goes for tourists too. Have you ever purposely replied with an English “yes” instead of a “oui” when being asked something in French? How hard is it to say OUI?? OK, I get it. Learning a new language as an adult is hard… but it’s not impossible. By not even attempting to be conversational in your new language, it kind of comes across as elitist and entitled. You’re the outsider and the guest in a new land, so don’t be that annoying expat or tourist who refuses to utter a word in any language other than their native tongue. Socializing (or at least being friendly) with locals won’t kill ya. It’s all about politeness too, so get on board. Even a few key phrases will go a long way!

3. Complain all the time

If life is SO BAD, then go home!! Right? RIGHT? No. We’re allowed to vent. It’s only human. But some of us have a tendency to see the glass half empty most of the time and that doesn’t automatically change just because we live abroad. If you do find yourself complaining a LOT, try to find out why. Where is all that negativity coming from and what can you do to change it? Think before you speak and if you’re about to say something negative, try to reframe it or at least follow it up with something positive. No one wants to be around someone who is always giving off negative energy. If expat living is no longer what you want, totally fine, but don’t ruin everyone else’s day. Every day. Try writing in a journal, talking to your dog or at least family and old friends that get where you’re coming from. Dumping all your negative thoughts on new friends all the time will give off the wrong vibe.

4. Talk about how wonderful life abroad is all the time

The exactly opposite of complaining all the time can be just as annoying. If you’re constantly flaunting how great your life is abroad by posting pics on social media and raving about how wonderful everything is, you might want to grab a piece of humble pie and wash it down with a glass of self-awareness. If you’re now living in a place where your family’s relocation was paid for, your housing is covered, you have a maid, and you’re earning 1000 times what a local makes (and your spouse doesn’t need to work to support your family), you may not want to brag about that and all the great trips you’re taking. Sometimes our intentions are good but we come off in a way that leaves others unable to relate.

Expat or immigrant? Why the distinction matters >>

5. Making people who work a traditional office job feel bad or “less than”

There are all kinds of jobs in this world and traditional office jobs are just as legit as anything else. Some people find comfort in their routine and enjoy office life. Just like others have embraced a digital nomad lifestyle. It all depends on what is best for you and what you want out of life. When it comes to work, one way of doing it isn’t inherently better than anything else out there. So talk about your job or your way of life, but no need to make others feel bad about their choices!

6. Not respecting a country’s cultural norms

Don’t be that loud American in the restaurant or that person who refuses to adapt. You’re not in your home country anymore so keep your eyes open and learn what people around you are doing. Always remember you’re a guest and keep your manners intact.

Tom and I will never forget our Venice gondola ride back before we were married. Sure it was a special ride but we remember it (and now joke) for other reasons. A group of Americans had just checked into their canal-facing hotel and decided to yell up to their friends on the upper level loud enough for those in gondolas below to hear, “Hey do you have a big bathroom??” I think people in Rome could have heard this woman shrieking about all the bathroom details.

Keeping your manners in check — and not being overly loud — is one rule tourists tend to break as they get caught up in the excitement of a new place. But they get a pass the first time. If you’re permanently living in a country and repeatedly disrespect your new culture? Well, that’s rude, so make sure you know what’s normal and what’s not. Try to be respectful and self-aware enough to know that yelling about your bathroom out a window in a quiet canal may not be the smartest of moves.

Can you relate? Have anything to add?

Expats — I want your language flub stories for an upcoming blog post!