Bradley Cooper and Lady Gaga’s new movie A Star is Born came out earlier this month and it’s gotten a ton of press. It’s a love story about a seasoned musician and a struggling artist. To promote the film, Bradley has been doing French media interviews in French. He picked up the language while studying in Aix-en-Provence back in college and charms the pants off adoring fans with his linguistic prowess. Beyond his charm, we can learn a lot from Bradley Cooper speaking French. It’s not the fact that he can speak French that’s remarkable since a lot of people speak more than one language; it’s what we can learn from him that’s impressive and what I admire. So let’s get right into it.

What we can learn from Bradley Cooper speaking French 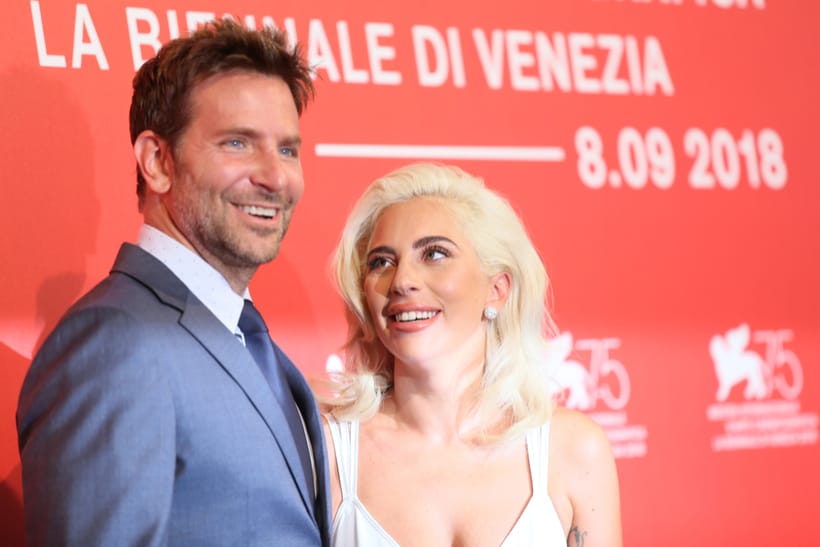 For those who aren’t in the know, Bradley Cooper is a 43-year-old American actor and filmmaker. Does Bradley Cooper speak French? Heck yes! I love watching him en français not because he’s perfect at French but because he makes a pretty perfect effort. He’s captivating.

Aaaaand, I’d be remiss if I didn’t give the “nice eyes award of the day” to Bradley. Look at his eyes. Just look at those icy blue beauties. OK, fangirling is now over.

Why does Bradley Cooper speak French and how did Bradley Cooper learn French? Well, he credits much of his French learning to his college days when he did a semester abroad in Aix-en-Provence. He immersed himself in French language and culture and it’s stuck with him because he’s continued to make French learning a priority.

When it comes to his French skills, you can tell he focused on speaking French as much as he could (instead of concentrating on just reading and writing) while studying abroad back in the day because he speaks naturally and that’s incredibly important. He’s worked on his pronunciation which makes up for the grammar and vocab mistakes and helps him to sound more natural. On top of that, he knows the filler words and mannerisms that elevate his overall delivery.

Watching Bradley Cooper speaking French boosts my own confidence because it’s proof that you can speak naturally and improve at any level. We all have something to learn and the unknown shouldn’t hold us back from moving forward. He just goes for it.

Watching #BradleyCooper speaking #French boosts my own confidence because it's proof that you can speak naturally and improve at any level. We all have something to learn and that shouldn't hold us back from trying.Click To Tweet

Bradley has the confidence to go on a national French TV program and interview in his second language and that’s majorly impressive. The thought of bombing or not understanding doesn’t prevent him from going out there and trying. I love this guy… in case that wasn’t already obvious.

1. He speaks with confidence

Someone with very limited knowledge of French watching the above clip might assume Bradley Cooper is fluent in French or even bilingual, but he’s neither. The reason why his French comes across as so proficient is because he speaks with confidence and it counts for so, so much. I love this about him and it’s something I noticed the first time I heard him speaking French. He’s confident — but not arrogant or showy — and this translates to having major charm. He’s poised and his French sounds natural.

Speaking a foreign language is scary and doing your best to speak authoritatively and confidently goes such a long way. It ups your level of French! He has a “what’s the worst that can happen attitude” and isn’t afraid to try. You’ll see he takes out his earpiece with the English translation at the beginning of the interview so he can do it 100% in French. When we watch Bradley Cooper speaking French, it’s clear that he has no problem in the confidence department.

2. He doesn’t focus on his mistakes

When Bradley Cooper makes mistakes speaking French, he doesn’t dwell on them or let them mess with his flow. He pushes forward, keeps moving, and is already talking about something else before you even have a second to realize he has made a mistake.

I’m sure he doesn’t always realize he’s made a mistake, but other times he most definitely does. Instead of pausing to correct himself or to search for a better word, he just says something and goes with it. There’s no hesitation or waffling between un and une. He speaks with conviction and doesn’t let unimportant mistakes throw him off his game or get him down. He keeps on going and it’s great to see that he DGAF. He has no fear.

After the interview, I’m sure he didn’t get down about his mistakes or give a second of his time to thinking about that stuff. Totally high vibe and I love it.

Here’s an example of how he rolls with it and stays positive despite not always being 100% sure of himself. In the image above, Bradley says Lady Gaga is an incredible actress and then has trouble differentiating between the words heart and body, which sound similar. Yann, the host, makes a joke and says, “Heart or body? She has both, so…” and they both laugh. Bradley keeps it light and doesn’t take himself too seriously. He’s a good sport and even reads some tongue twisters with the host.

When #BradleyCooper makes mistakes speaking #French, he doesn't dwell on them or let them mess with his flow. He pushes forward and keeps moving. Let's talk about what we can learn from Bradley speaking French.Click To Tweet 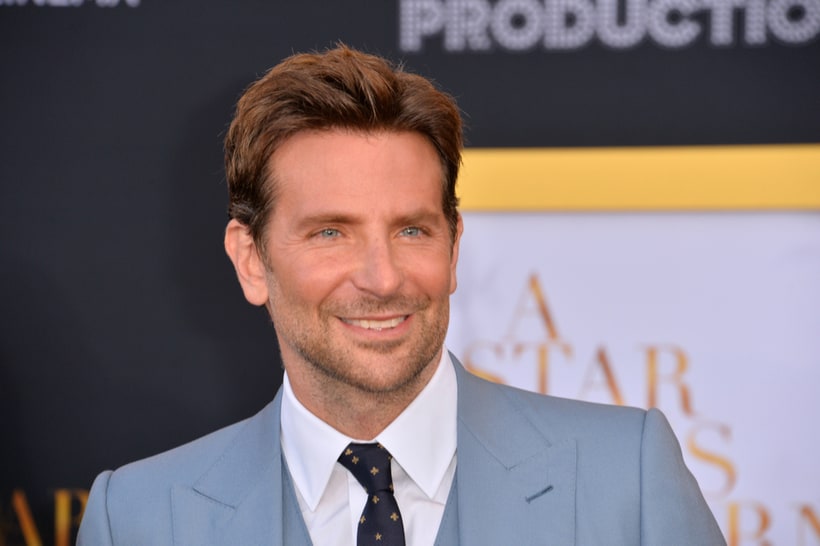 So back to that Bradley Cooper French charm. Yeah, the eye contact and smiles up his French game and it can help yours too. These are two easy things that we can all do no matter the language we’re speaking that will help us come across as warm, friendly, and sincere. Bradley Cooper nails them both and is super personable. We’re perceived more positively (and better at our foreign language) by others when our non-verbal communication is friendly. Along with that, Bradley stays relaxed as he’s speaking and seems comfortable. It’s as if the eye contact/smiles erase the mistakes and put everyone at ease.

Simple tips to be less nervous when speaking French >>

I haven’t seen A Star is Born just yet, but friends have told me it’s worth the effort to find it in English. The mark of a great performer is when he or she plays the character so authentically that you forget you’re looking at a mega-star (a singer, not a career actress! and the reverse for Bradley) and all you can see is the character on the screen. Apparently Lady Gaga and Bradley kill it, so can’t wait to see it on the big screen. I have no doubt I’ll enjoy myself. Can’t wait to hear Bradley Cooper sing! 😉

As for all the Bradley Cooper French interviews, I can’t get enough of those either!

Have you seen A Star is Born? What do you think of Bradley Cooper speaking French? Does he inspire you too?

Also, check out my friend Jasmine’s post on “The Bradley Cooper effect” and her take on how one’s attractiveness affects how their language skills are perceived. 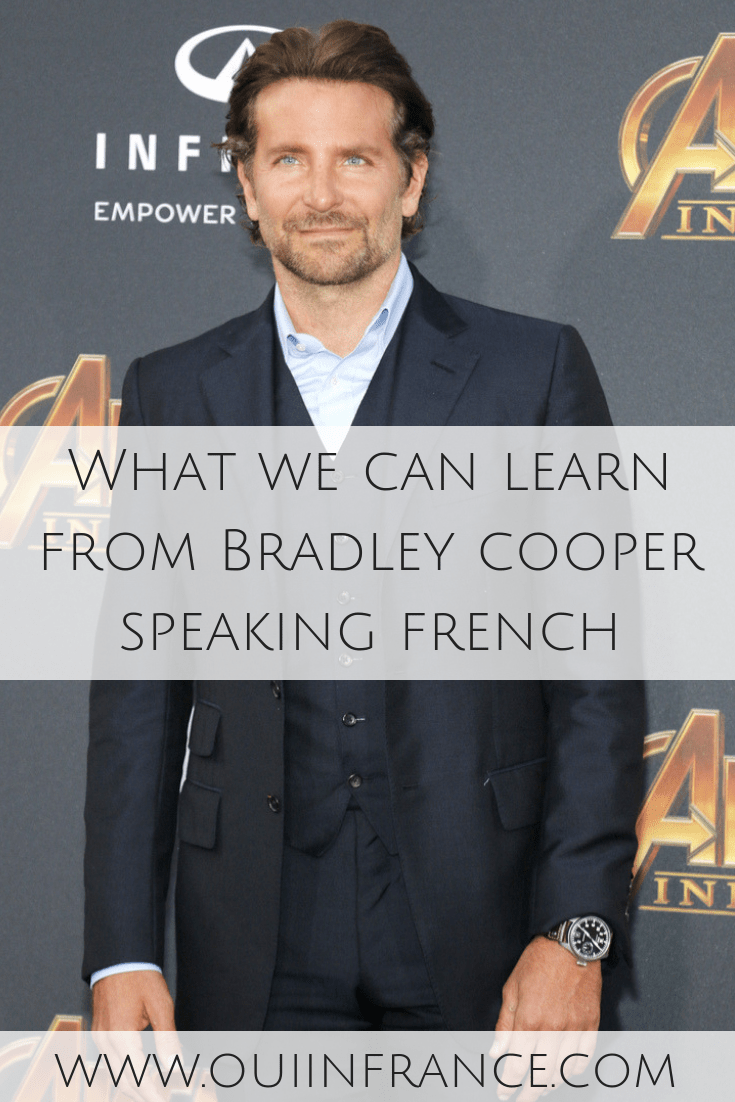 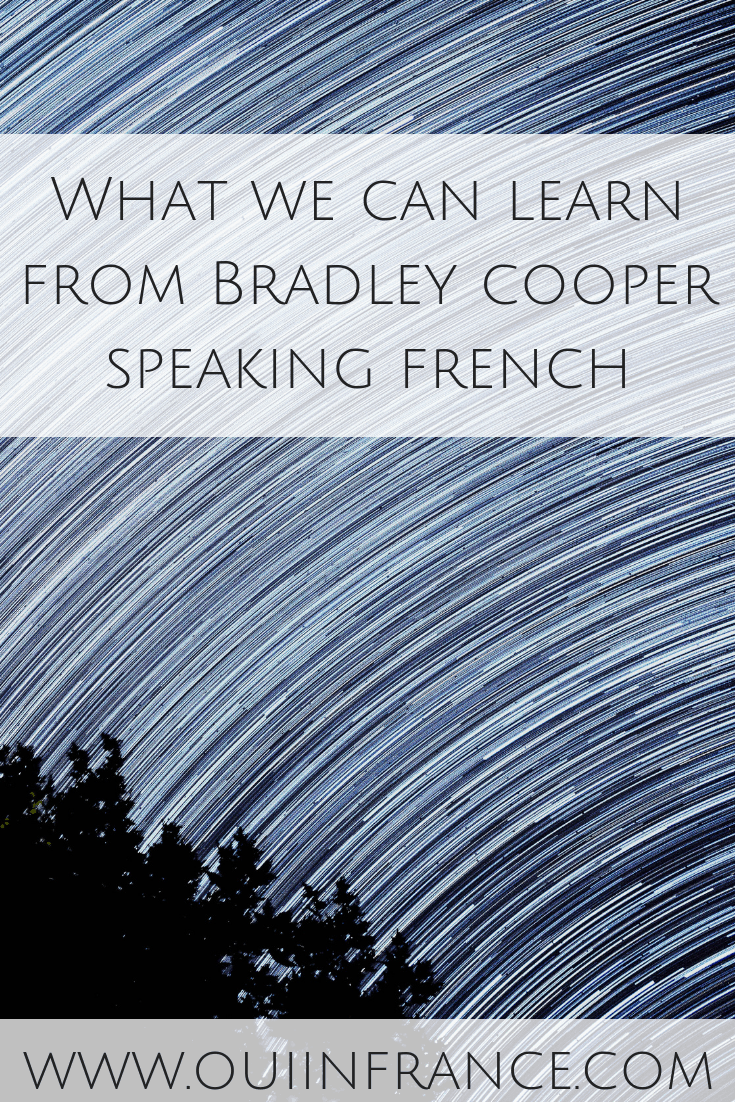