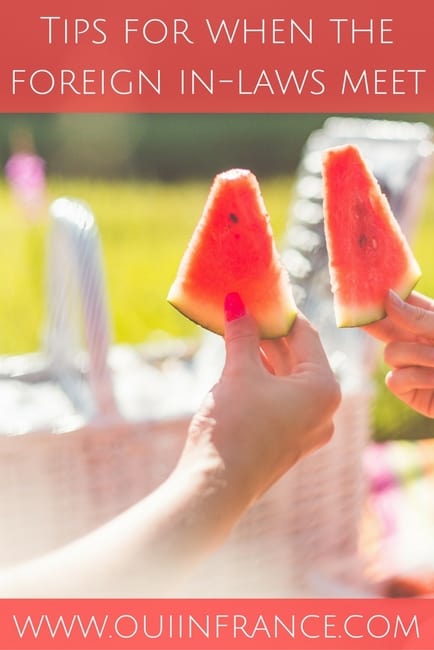 Meeting your significant other’s family for the first time is nerve-wracking no matter where you’re from. For those of us in relationships with someone from another country, meeting the family can be quite an experience. That goes double when your partner’s native language differs from your own. If the day comes when it’s time for the in-laws to meet each other, take a deep breath. Even if they don’t speak more than a few words of each other’s language, which is the case in our respective families, it doesn’t have to be a disaster. I’m living proof. My parents have met Tom’s parents on 2 separate occasions since we’ve tied the knot and have lived to tell about it.

Here are some tips on how to have a smooth multicultural experience for when the foreign in-laws meet.

Tips for when the foreign in-laws meet each other

The first time Tom’s French parents met my American parents was the summer after we got married. We all decided to spend a week together down in Provence and Tom and I would act as unofficial translators. We figured a week together under the same roof will either have us all hating each other or we’d have the time of our lives. Luckily, it turned out to be the latter, but I’d be lying if I said there were no hiccups along the way.

A week of touristy vacation stuff with both our parents there — and actually interacting with each other in their own way — was a great first meeting. Then, a few years later we all spent Christmas in Brittany. It was smooth sailing except that everyone but me got the gastro. Nothing like bonding over being sick!

A quick word on personalities:

My parents and Tom’s parents are luckily all easy going people who enjoy language and cultural exchange. Both couples were open to meeting each other and look forward to the next visit, so I lucked out there.

Before you plan a multicultural family vacation like I did, twice, think it through. You and your partner know everyone best.

If one or more of the in-laws is uptight, self-conscious about language-related things, totally against traveling, or super close minded, proceed with caution.

Maybe a week-long vacation together upon meeting isn’t the best route for your family. You know your family and their personalities best, so plan accordingly. 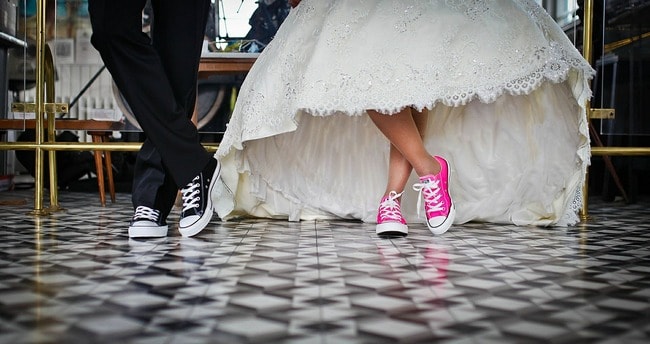 First thing the dads did in Provence:

The day we all arrived in Provence, we sent the dads to the grocery store to stock up on food for the week. Both guys do most of the regular grocery shopping anyway at home, so it was a common activity we figured they’d both enjoy. Our dads had a nice 2-hr trip to Carrefour and they had a whole bunch of stories to tell upon arriving home, especially since it was my dad’s first trip to the French grocery store. They gestured to communicate, and I’m sure to any observers in the supermarket, they looked like 2 somewhat impaired people trying to shop. Or just two dudes who had never been in a supermarket before who were, for some reason, shopping together. But it all worked out and they had a bunch of laughs.

But this only worked because both guys were open to the new experience and accepting of the fact they could barely communicate. They just went with it.

So let’s move on to some tips to keep in mind for when the foreign in-laws meet for the first time. A few of my tips have come about after doing the exact opposite and realizing there was a better way to go about things.

Things that are true when your husband is French >>

Find common ground and build on it

Icebreaker activities are your friend. In my case, both families enjoy cooking, so we all headed into the kitchen and an impromptu language learning game ensued. We quickly prepared our meal while having fun at the same time. One person would point and say the word in their language and the other pair would say it in theirs. My parents learned some French food words and Tom’s parents worked on their English in a no-pressure environment.

Don’t let your ego get in the way

When you meet someone new, it’s best to go in with no preconceived notions about who they are or what they’re like. Remember that your way isn’t always the best way and that just going with the flow is key. As in my supermarket story above, both dads were open to going shopping together and were fine with temporary awkwardness and misunderstandings. They both laughed about it and weren’t too concerned with embarrassing themselves.

This is for 2 reasons: So people feel at ease and not left out of a particular conversation or activity and so no one feels obligated to translate for the others. That way everyone can enjoy the activity and just “be.” So no Trivial Pursuit or other word-based board games. No movie night (subtitles aren’t always a positive thing especially for people who have small TVs, and you may have one side of the family feeling shunned). My suggestion? An easy-to-play game like Uno is always a hit because it’s simple. 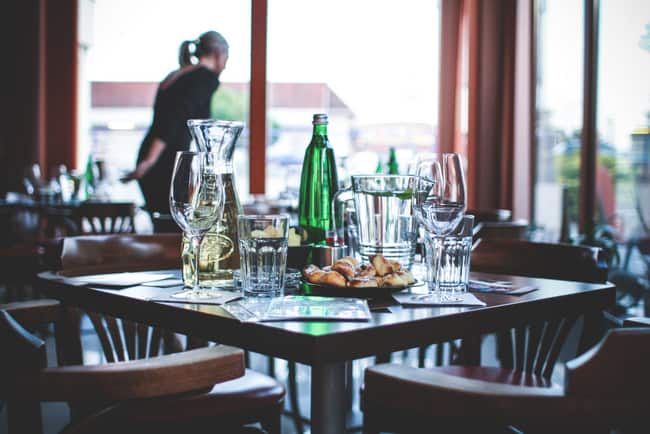 It’s our responsibility to make sure the parents are always involved and are a part of the conversation, on both sides. So someone needs to jump in, always, and provide a quick explanation of commentary, jokes, and everything else. It’s the polite thing to do and goes a long way toward the overall harmony of the meal. Everything will fall on the “kids” (so in our case, me and Tom) in terms of translation but it comes with the territory. Even if it seems tedious or like overkill, just do it. Trust me.

Will I be fluent after living in France for a year? >>

Throughout the day, the bilingual person or people should ask if one side of the family wants to say anything to the other side of the family. Maybe there was something from earlier in the day they forgot to ask or maybe it’s something in the moment. But keeping the lines of communication open and showing that you’re there and willing to translate will help everyone to feel included even if there is a language barrier. Even if no one has anything specific to communicate, by asking both sides often, you’re showing that you’re doing your best to create a positive group dynamic where everyone is involved.

Again, trust me on this. My mother-in-law used this against us last month out of nowhere referencing dinner with my parents a few years back where they didn’t understand and felt it was mostly in English. I wish she would have spoken up in the moment. (FYI, I hate when people harbor resentment instead of speaking up in the moment and then throw it back at you months or years later. What is the point of that? Grrr.) So the moral of the story here is that sometimes you aren’t always aware of people’s feelings, so my advice is to translate even if no one asks and always leave the lines of communication open!

If more than one person in your group speaks both languages, make sure the same person isn’t the one who is constantly doing the translating

As I mentioned above, translating can get exhausting. And it can get in the way of your meal or activity! If there’s more than one person who speaks both languages, take turns with the translation. If Tom is the one translating at lunch, I’ll do dinner. Or when I see his mouth is full, I’ll jump in. Work as a team and only good things can come from it.

If your partner’s family speaks a different language, have they ever met each other? Do you have any stories about how the in-laws met in your family? Would love to hear in the comments! 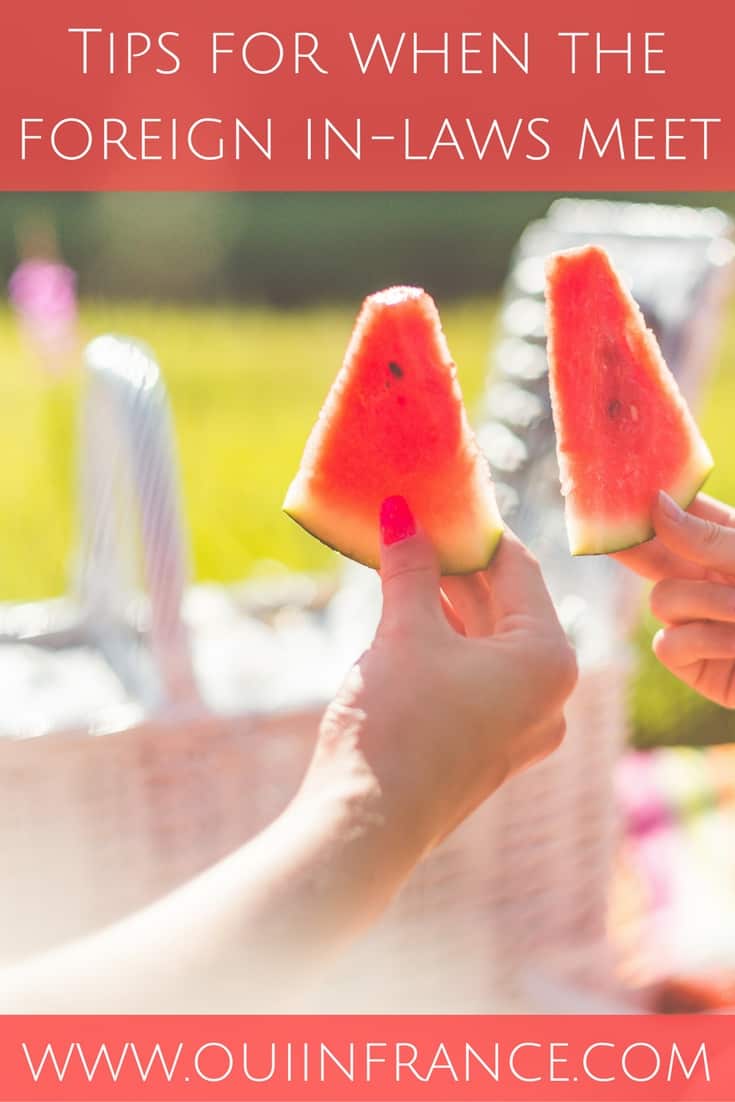 Would you rather spend the holidays with your pets or in-laws? Expats weigh in