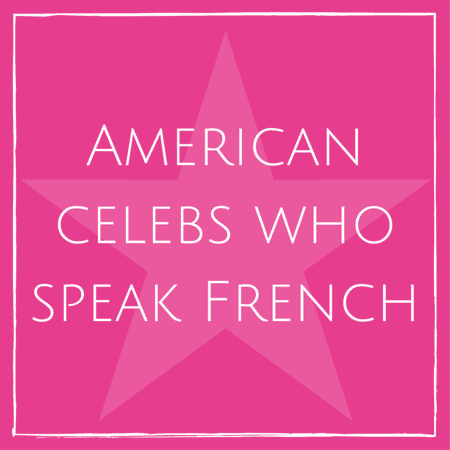 Ever wonder if any famous Americans speak French? For your viewing pleasure, here are a few videos of American celebrities speaking French.

Anyone who’s learned another language knows it takes hard work, dedication, tons of time, and major courage. That goes triple if you start learning as an adult. Then add on the fact that you’re being interviewed in public and recorded? Oh man, I’d be so nervous! But these celebs take it in stride.

Here are some American celebrities who speak French:

Serena is a tennis superstar but you may not know that she’s also been working on her French. Serena gets an A for effort and spoke with reporters in French after her Roland Garros win over the weekend.

Everyone loves Bradley and the French are so impressed with his confidence while speaking their language. He speaks really naturally! I wrote an entire post on what we can learn from Bradley Cooper speaking French.

Joseph Gordon-Levitt studied French poetry among other things at Columbia University which sparked his love for all things French.

Actress Jodi Foster started learning French young and went to Lycée Français de Los Angeles. She speaks with barely any discernible accent and pretty much sounds like a native speaker. So since she’s pretty much a native speaker, I almost left her off my list.

American actor John Malkovich lived in France with his family but apparently left in 2003 over a tax dispute. His French is still intact.

Former United States Secretary of State John Kerry shows off his French skills… did you know he speaks French? He’s definitely worthy of being on my list of American celebrities who speak French.

Does Bradley Cooper speak French? Amazed by what I learned from it!