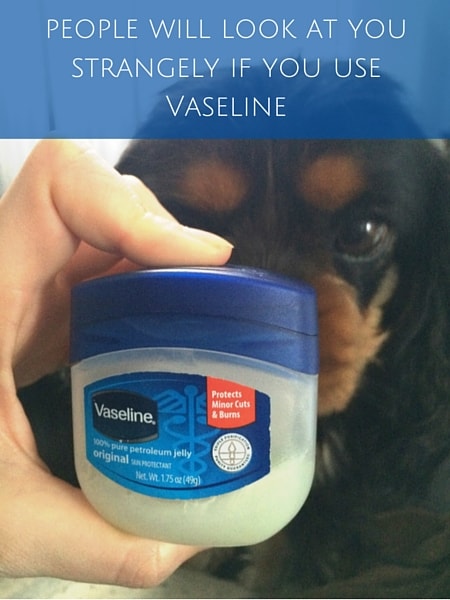 Yup, this post is going where you think it’s going. In France, this is why people will look at you strangely if you use Vaseline regularly… and how I found out it’s not the most normal thing to whip out in polite company! What’s the deal with Vaseline in France?

In the USA, the brand Vaseline is made by Unilever and they have a whole product line of Vaseline items in addition to regular petroleum jelly including body lotions, sprays, hand creams and more. It’s all very normal stuff and Vaseline even makes a lip therapy formulation. I’ve used the little travel sized Vaseline pots that I get at Target to moisturize my lips for years. Regular Vaseline is effective, cheaper than the specific lip therapy kind and lasts forever.

I use Vaseline in France all the time.

Why don’t I just use Chapstick?

You see, I have this pesky citrus allergy and the Vaseline majorly comes in handy when it flares up after accidentally ingesting a food with citrus. I often apply Vaseline to my lips 50+ times a day during those periods because it’s honestly the only thing that provides any sort of relief. And even when I’m not having a bad reaction, I like using it on my lips. 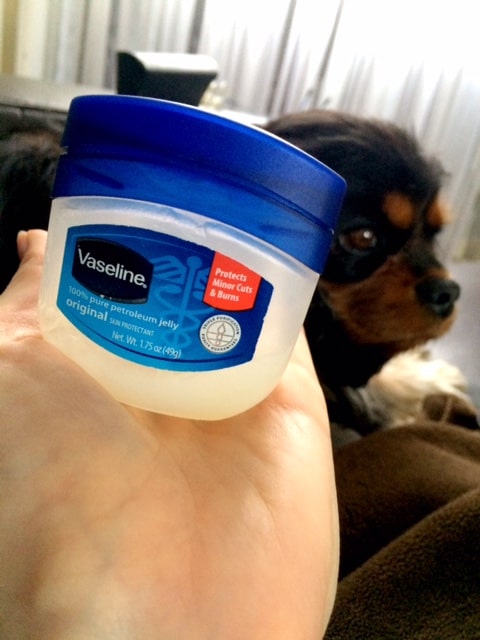 I was at a restaurant here in France during one such reaction and left my little pot of Vaseline on the table next to my fork. When I’m having a reaction, the little tub is pretty much glued to the palm of my hand.

And that’s not all. I’ve taken out my pot of Vaseline on the metro. Mid-conversation when out with people. And at my in-laws’. I even have one on my coffee table in my living room in full view just in case I need a little lip soothing when I walk by. And on the sink in our bathroom. I never thought much about it. No one ever said anything to me about my seemingly innocuous little blue tub of Vaseline. Why would they? Apparently, there’s even whipped Vaseline now.

It’s just a lip treatment…. right? What do people use Vaseline for?

One day at my in-laws’, I ran out of my Vaseline when my lips were killing me after having fish with a sauce that had lemon, so I nonchalantly asked my father-in-law if he had any. He kind of smiled and said no. I didn’t think anything was funny — did I pronounce it wrong?

Oh well, to stock up, my mother-in-law and I went to the pharmacy when we were out running errands. It’s easy to find Vaseline in France, right? I proudly whipped out my empty tub of Vaseline and showed the pharmacist what I needed . I also made sure to explain that I use a lot of it. I also told her my husband has been stealing it lately (he’ll put it on his lips in the morning before he leaves for work, but I left that part out of my explanation) so that’s why I was running low.

She looked at me a little strangely but said nothing to make me second-guess myself. She showed me the generic tubes of French Vaseline they had but the formulation was too wet. I told her that wouldn’t work. I saw some teenagers snickering behind me but thought nothing of it at the time. I eventually found a suitable product, paid and left.

When the French pharmacist talks about your vagina >>

A few months later, I was reading something online about Vaseline in France (Geraldine of Comme Une Francaise talks about it in her video here). To my horror, Vaseline in France has a strong reputation for being pretty much a lubricant for sex — and that’s it. Sure it moisturizes and soothes burns, but if you say Vaseline to a French person, they’re going to think of it as a sexual aid. That can sometimes still be the case in the USA too but not on the same scale that it is in France. The brand Vaseline has a variety of products in the USA and that old-school connotation isn’t the norm across the Atlantic.

I didn’t want to believe what I had read about Vaseline in France, so naturally I asked my litmus test for all things French: my husband Tom. Sure enough, he confirmed that what I read was indeed correct. He said in France, Vaseline is French called la vaseline has a very strong sexual connotation. Oh damn.

That’s why I’ve never seen my little tubs or lotions in stores. There’s no Vaseline product line of lotions and lip therapy. It pretty much has one purpose (or people’s minds jump to that one purpose in France).

So as you can imagine, leaving my little pot of Vaseline on the table at dinner or taking it out of my bag whenever I felt like it must have been seen as quite strange. That pharmacist must have thought my relationship with my mother-in-law was very open.

Maybe it’s time I put some decorative washi tape over the word Vaseline on the label.

Ever have an experience like this with Vaseline in France or abroad?