Bonjour, tout le monde! It’s been a lonnnggg time since I’ve done one of these! Before I had a newsletter, I used to do somewhat regular Monday Mishmash posts. They are roundup-style posts that update you on happenings around here, share some cool links and let you know about anything else going on. 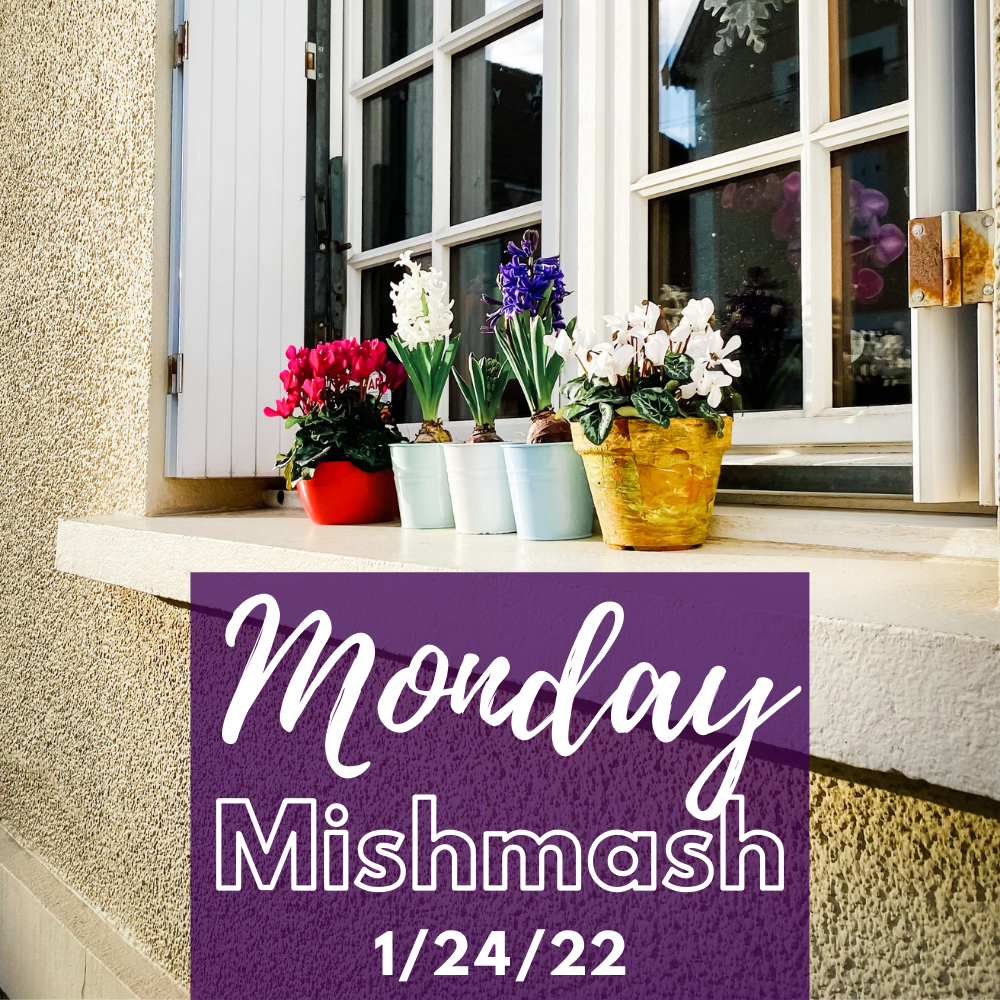 How’s January treating you so far? We’re taking it one cold day at a time and easing into 2022. I can’t complain — you know I love the cold — and we even got a dusting of snow a couple of weeks ago, so it pretty much feels like winter for once (highs have been low 40s F).

With all the new cases of Covid lately, Tom, Dagny and I are staying put for the near future and trying not to catch it. We have a lab down the street and when I look out our bathroom window, I can see the line at the lab, which is often wrapped around the building onto the sidewalk. The other day I looked out and there was no line so I thought maybe Covid was dying down, but nope! The line had actually snaked around the other side of the building through the parking lot, which was obscured from my bathroom view. I didn’t see it until I was out walking Dagny.

I can’t wait until Covid is a thing of the past for all of us. My dad still can’t taste or smell even though he had it back over Thanksgiving. Hope you’re all healthy.

In YouTube news, I have a new video coming out for you tonight. I’ve been on my first break from YouTube in over a year and am ready to be back with a new video, so I hope you’ll head over to my channel in the coming days to check it out. 😉

Need a few show recs? The latest ones we’ve found ourselves watching are all English language shows.

–Dexter: New Blood. Tom got me into Dexter years ago and while I haven’t seen every season, it’s easy to jump into the reboot and follow right along. It’s pretty nuts, in typical Dexter style, and will keep you on the edge of your seat until the finale.

–Stay Close. This is another Harlan Coben book adaptation set in the UK. The miniseries has mystery and intrigue like you’ve come to expect. After a guy named Carlton goes missing at a club, it sets off a chain reaction that leads us down a bunch of different paths. If you like a good thriller, it’s worth a watch.

–Ozark: Season 4. Tom and I were waiting for this! I wish Netflix recapped the previous season because it’s been a while since Season 3 ended and our memory was a bit foggy. But it picked right back up after the shocking finale last season. We meet a few new characters and I’m so curious to see where this season goes… we’re 4 episodes in so far.

I’ve been playing around with the idea of starting a Oui In France Patreon this spring. If you’re not familiar with it, Patreon is a way for creators like YouTubers, bloggers, artists, designers, etc. to charge a monthly membership fee for supporters who are interested in different perks… it’s for superfans more or less. Patreon helps creators to be less reliant on algorithms, ad revenue and sponsors and provides us with addition funds to put toward our creative endeavors and keep making content you love (and you get perks in exchange!).

The tiers might range from a few dollars a month up to 20 or more and perks might be additional videos, subscriber only-polls and livestreams, recognition on the channel, and so much more.

It’s always feels a little strange to ask people to support, but something I’ve learned over the years — especially as a woman — is that if we don’t promote ourselves and what we’re doing, no one else well. I’m proud of what I’ve built here on the blog and on YouTube and that I’m able to reach people in different ways through sharing my life in France.

So yes, I’m considering Patreon for later this year. I put a poll on my YouTube channel’s community tab just to gauge interest and while most of the responses were expected (small portion say they’ll support right off the bad, majority say they don’t support creators in this way, and the rest were on the fence and want to know more about perks), one really left me scratching my head. Super defensive and strange. Even if she misunderstood and thought I was putting content behind a paywall, there’s no need to react like this. 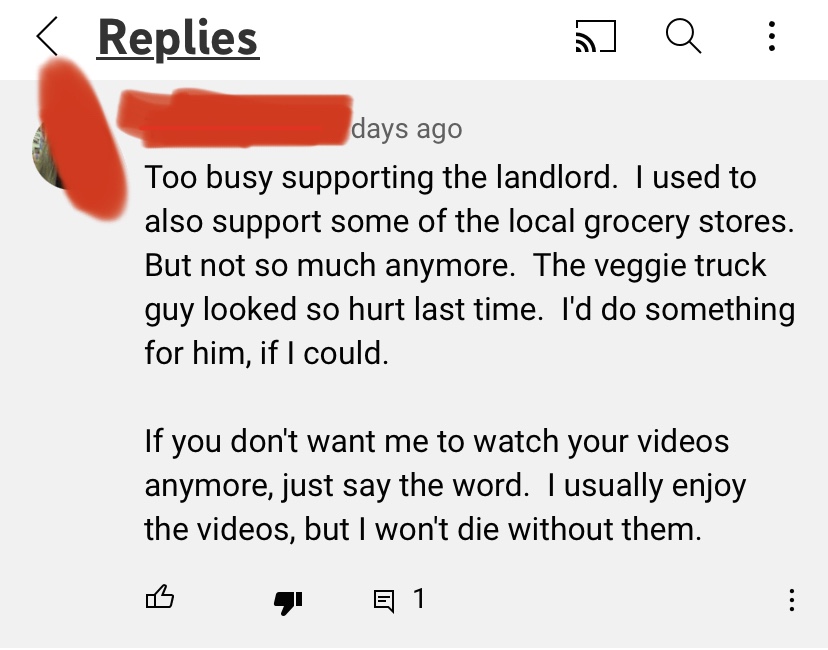 I fully understand the vast majority of people who interact with a creator’s content are only there for the free content. My blog and YouTube videos are and always will be free, so nothing is being taken away from anyone.

I know that most people won’t support creators via Patreon and that’s totally fine. 😉 Even if you agree content creators should be paid for their work, not everyone has the budget or inclination, so I get it. But the option will be there for those of you who want to engage with me over there.

What I don’t think is fine is to be rude to someone or insult them because they’re giving their supporters the option to support them. People who launch a Patreon aren’t forcing anyone to do anything. I don’t think the casual viewer understands how much time, energy and money go into producing videos once you hit a certain level and make a certain type of content. And I think it’s OK to earn money from our work.

That’s not to garnish sympathy, but it’s to be real with you that producing content is not as simple as turning on a camera and saying whatever comes to mind and hitting upload. There is a ton of prep behind the scenes. The easier a creator makes it look, the more time they put into creating that content. If people get value out of my work and have asked if there’s a way to support me, I would be silly to not explore what options are out there.

Melanie Casey Jewelry. I am in love with American jewelry designer Melanie Casey’s work. Her style is minimalist and dainty and I love pretty much every jewelry piece she puts out because it matches my minimalist jewelry aesthetic. The diamond I’m making from my mom’s ashes won’t be ready until late this year ,so I’ve made it my mission to insulate myself in beautiful jewelry — my mom’s and pieces that remind me of her — as a way to honor my mom and help me feel closer to her. She was such a fan of jewelry.

Sheertex hosiery. I’ve also been living in my Sheertex tights this winter. I have to do a full review, but as I’ve mentioned before, these high-end tights are virtually indestructible and will last you seasons. It is impossible to put your nails through them by accident or get a run. Really. They’re ethically made in Canada, are machine washable and if anything makes them unwearable during the first 90 days, Sheertex will replace them for you free of charge. Best tights I’ve ever worn. Get $20 off with my link.

Jean Vier. This French linen and housewares brand out of Basque Country is gorgeous. With many items on sale right now for les soldes, it was time for me to stock up. The dove pattern caught my eye and I couldn’t help but pick up an apron and a few other goodies. My mom always wore an apron in the kitchen and I don’t even own one, so again to honor my mom, I bought my first one, pictured above. The doves are prefect for every time I cook. They are a symbol of peace and love, after all.

Happy Monday, tout le monde! What’s going on with you?

« Which French visa type do I need? (plus a France visa insurance rec)
5 Minimalist jewelry brands you need to know about! »