Is Paris safe for tourists? If you’ve been following the news out of France over the past couple of weeks, you know all about the Gilets Jaunes movement. The Gilets Jaunes, or Yellow Vests in English, have been demonstrating all over the country and Paris was hit particularly hard by the destruction over the weekend. It started as a grassroots citizens’ movement made up of working people — with participants donning a yellow hi-visibility roadside vest — to voice feelings on a planned increase on the price of diesel and gasoline. Calm protests that started out with road blocks have turned increasingly aggressive. Now the Gilets Jaunes represent a greater anti-government movement that goes beyond fuel prices. Several readers have written to ask me if it’s still safe for them to visit Paris on an upcoming vacation and here’s my answer. I’ve included resources at the end that you might find helpful.

Is Paris safe for tourists? 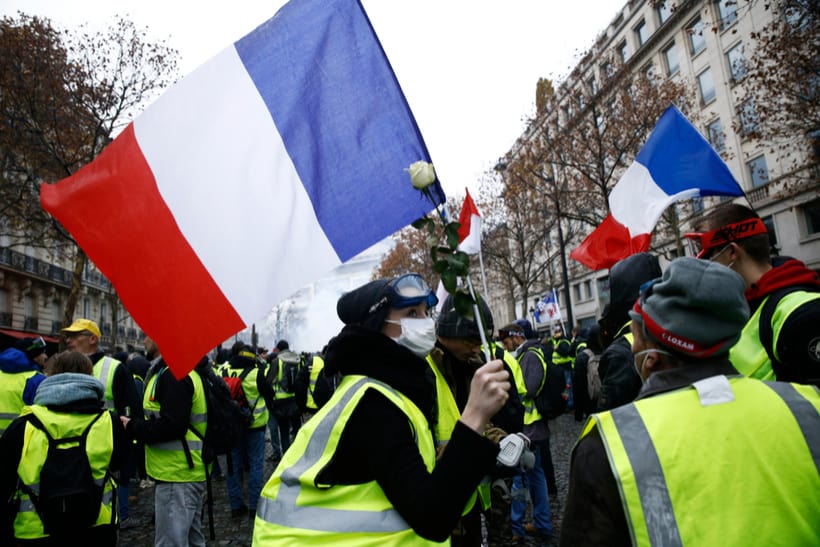 Paris, France. 1st December 2018. People take part in a protest march of the yellow vests against the rising of the fuel and oil prices. Credit: Shutterstock.com / Alexandros Michailidis

The Gilets Jaunes movement is complicated, so I don’t want to focus on the heated politics here. I’ve provided links at the end with more information on the nuts and bolts of what’s going on. As of today, it seems the government will be postponing fuel hikes but I’m not sure it’ll stop the protests.

Tom and I just got back from the USA, but on the day we left, the Gilets Jaunes were starting to protest in and around Nantes Airport. I shot this quick video that I posted on Facebook showing the situation back in mid-November. While nothing I witnessed was particularly violent, it could have easily escalated. Hordes of people were walking back and forth at crosswalks to delay motorists, fires were started in the middle of the street, and cars were deliberately parked in places to stall traffic. We saw aggressive confrontations, and since then two weeks ago, what I’ve seen and heard in Paris and around France is deeply troubling. The day before we were to fly into Nantes Airport, protesters were physically out on the tarmac blocking flights from taking off!

That’s not normal. But I understand.

I, like many French people, understand the Gilets Jaunes’ original motive of getting the government to stop planned fuel tax increases . I agree with people’s right to calmly protest and express themselves. What I don’t agree with are the methods and the way this has escalated. Any type of protest that includes violence and damage to property is not OK and there has got to be a better way of getting your point across and effecting change.

For the record, fuel prices in France (and Europe) are already quite high. For working class people who rely on their car to get to work from rural areas, the increased taxes would be detrimental. Minimum wage in France (SMIC) for full-time workers is 1,153 € NET per month.

In my area of the Maine-et-Loire, the current price of fuel is: 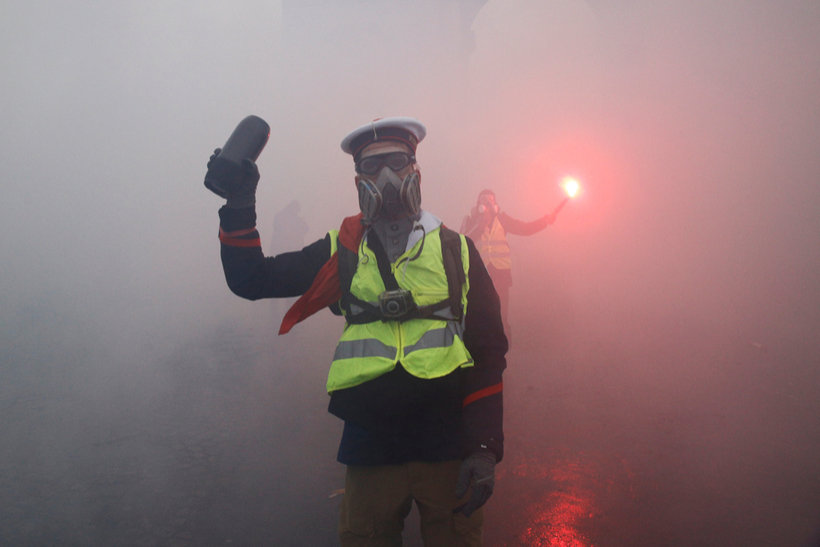 Paris, France. 1 December 2018. Riot Police uses a water cannon and tear gas against demonstrators during a protest of the rising of the fuel and oil prices by people wearing yellow vests. Credit: Shutterstock.com / Alexandros Michailidis

So is Paris safe for tourists, or any area of France?

The answer is…. mostly yes (and a little no).

It’s a big question and not one that I can answer for you. Ultimately, you have to do what you are most comfortable with and what feels right for your particular circumstances.

Have you been planning your trip to Paris for years? Is it your first time and will you be there over the weekend, next weekend? Is it important to see all the top tourist monuments on set days? Do you have travel insurance? Are you a nervous traveler in general? Are you OK with having flexible plans? Are you an experienced traveler who keeps a low profile?

These are questions I’d be asking myself if I had upcoming Paris travel plans.

My stance on life ever since I was a teenager is that we have to live our lives and not let ourselves be ruled by fear or what-ifs. Bad things happen everywhere, both near and far and are out of our control, but that’s not to say that we shouldn’t take the current political situation in France seriously and just hope for the best. Burying our heads in the sand and going about life as usual is not the best answer either. In an ideal world, Paris would be perfectly safe, but it’s a real city with real problems like many places around the world.

Right now, tensions are high in France. The Gilets Jaunes movement is far from ideal and remains unpredictable. But I think it’s important to keep what’s going on in perspective. That’s not to say it’s something we should sweep under the rug or not take seriously. This is a serious situation and I’m not saying Paris is perfectly safe and everything will be fine. Let me be clear about that. No one knows what will happen in the future. No city is 100% safe and there’s risk in everything we do.

Despite what we see on repeat on the news, all of France is not burning or in crisis. I feel silly saying that but relatives of mine have contacted me worried thinking the whole country is in ruins. That’s not the case and far, far from the reality. A relatively small area of Paris was affected (pretty badly). But not every French person is out protesting or acting violently. Cities all over France aren’t overrun by anarchists.

Yes, about 285,000 French people have mobilized in support of the movement nationwide but many of those were peaceful protests that didn’t escalate to extreme violence and destruction. Extremists (pro rioters) have now cashed in on the opportunity to wreak havoc on the police and everyday citizens as part of this movement. That’s what the news is focusing on. Parts of Paris have been heavily affected as these recent photos from over the weekend show, but by taking precautions, you can do your best to stay out of harm’s way. 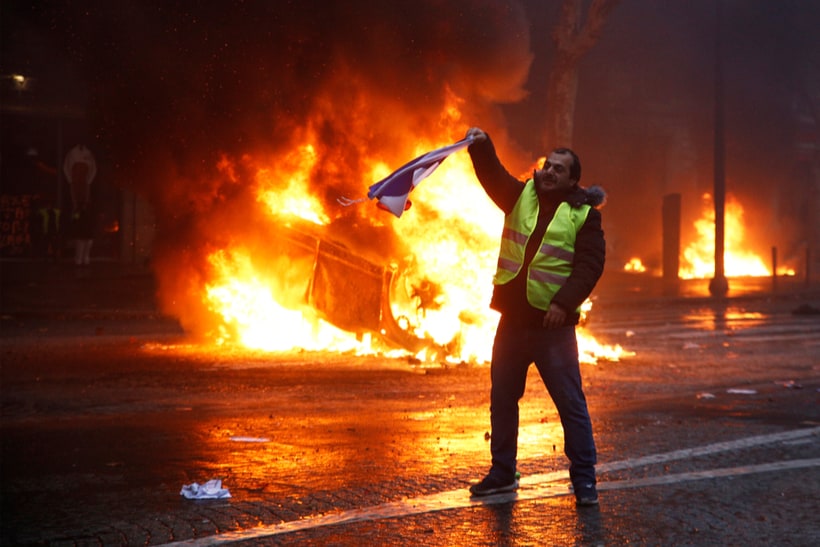 It’s not easy to answer is Paris safe for tourists,” but we do need to take precautions when we visit any big city. Here are some tips I’ve compiled based on my observations and experience for those of you heading to Paris. They apply to the current set of circumstances but are good tips for smart travel in general:

While protests are happening nationwide, they aren’t as severe in other areas of France. That said, use caution regardless. If you’re coming to France and just connecting in Paris to vacation elsewhere, I would encourage you to continue with your planned travels. I just passed through Paris’ Charles de Gaulle airport yesterday and there were no issues at the airport itself. But check the latest advisories before you leave to keep an eye on the ever-changing situation.

While everything in Paris is concerning, this movement was not aimed at tourists, so staying away from the demonstrations is the best course of action.

It would be irresponsible of me to say that if you’re vigilant, you’ll be fine so don’t cancel your travel plans. It would be just as foolish of me to say that you should stay home and postpone your trip because you’ll be subject to violence and chaos. Neither one of those things can be said with any certainty. 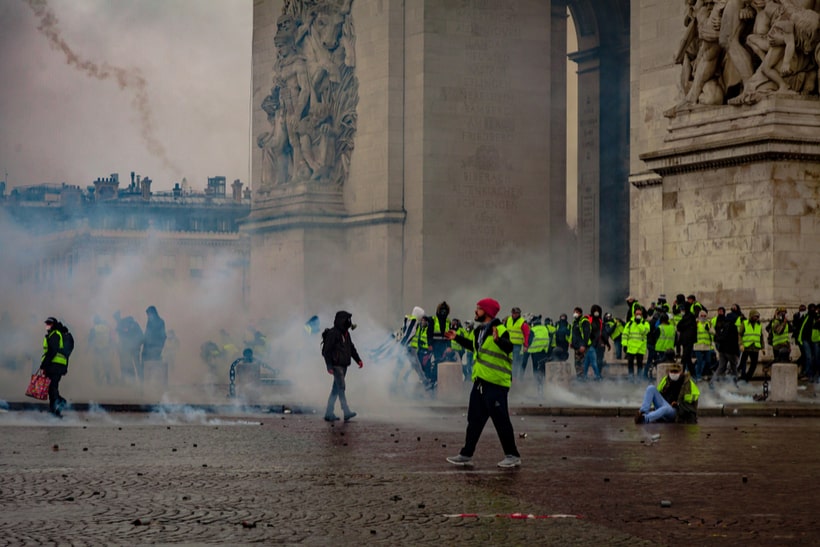 If you have plans to visit Paris in the near future, go with your gut. Do your own research. Is Paris safe for tourists? There’s no right or wrong answer — just the one you have to be comfortable with.

The bottom line is that France is not engaged in a civil war and extreme demonstrations are not happening everywhere. The protests are only happening on the weekends for the most part. As I said, this isn’t directed at tourists, so by staying away from the main protest areas, I feel you can still have a lovely time vacationing in Paris. You may be inconvenienced by the protests and have to change which attractions you see when or the route you take when you walk there, but I personally don’t feel tourists need to cancel their upcoming vacation plans to Paris in response to the Gilets Jaunes.

Anyway, all this is my opinion as a woman who’s lived in France for nearly 7 years. I personally would still travel to Paris given the current situation. I wouldn’t cancel my plans. But I’m not you. Only you can decide if you’re comfortable traveling to Paris and what’s best for your particular situation.

Info on what the Gilets Jaunes are all about and opinion pieces that I’ve found particularly helpful:

“Who are the Gilets Jaunes and what do they want?” via The Guardian

“Yellow Vests riots in Paris, but their anger is rooted deep in France” via The New York Times

Do you have upcoming travel plans to Paris? What are your thoughts on the Gilets Jaunes? Do you feel Paris is safe to visit?

PIN IS PARIS SAFE FOR TOURISTS: 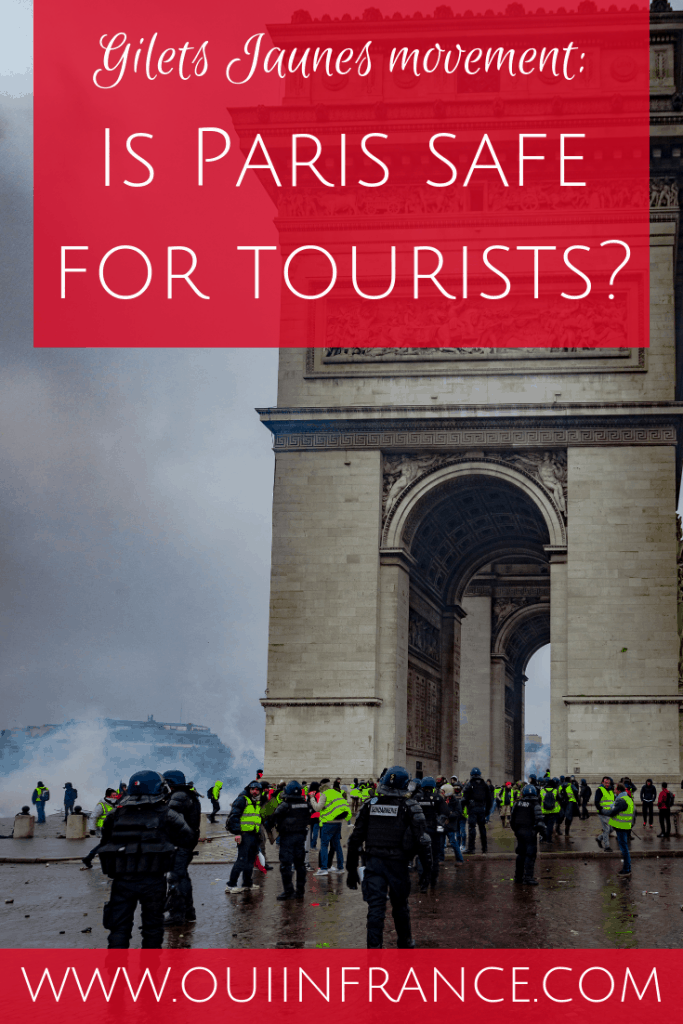 How to stay safe online: A guide for solo female travelers