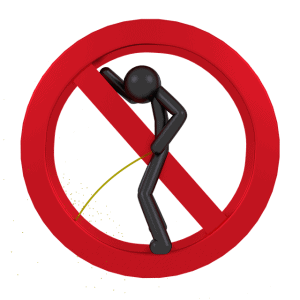 When I was 6 years old and my brother was 2, we were in my grandma’s car going somewhere on a NJ highway. At one point, my brother (who was really proud of himself for no longer needing pull-up diapers) let my grandma know he had to pee. Like any good grandma who wanted to avoid a wet car seat, she pulled over to the side of the road to find a spot for him to go. Mid-pee, a cop pulled off next to us on the shoulder and issued my grandma a pricey ticket before my brother could even get his pants back up. I learned from that day on the importance of using a toilet when you have to pee.

But French dudes? They pee everywhere!

What sparked this post? A well-dressed man at the park Dagny and I just saw an hour ago peeing on some bushes. He wasn’t doing a great job at concealing his business and relieved himself right there like it was no big deal at all. He made sure to shake it off about 10 times after he was done so I was 100% sure he was peeing.

As he walked away, I called out to let him know the park bathrooms were just a 2-minute walk in the other direction but he didn’t even seem to hear me. Ugh.

I’m all for free pee rights when it’s an emergency or when you have a medical condition or are under the age of 5, but come on, at a public park in plain view when the restroom is RIGHT THERE??

So about French men urinating everywhere but the toilet. This is not an isolated incident, nor is it something that only drunk, homeless, or educated guys do. Two of my male family members, who will remain nameless to preserve their dignity, peed in a parking lot on a recent road trip to Brittany an hour into our drive. It ain’t no thang.

In any given week I see about five guys peeing in plain sight in public. On a wall behind the supermarket, on a bush in the park, behind their car, and my personal favorite for sentimental value, peeing on the side of the highway. If they would just ask me where the bathrooms were, I’d point them in the right direction. But that takes too much effort, it seems.

Guys pee in public in the US too, but I feel like it’s on a much smaller scale and usually reserved for guys who have been drinking a few too many beers at the pub. And they get socially shamed for being so crass. Maybe I’m off-base. Peeing in public just seems so much more common and accepted in France.

Also, I think as a female I’m jealous that men can just pee wherever they want and I have to hold it. But, hey, let’s not abuse it, guys. 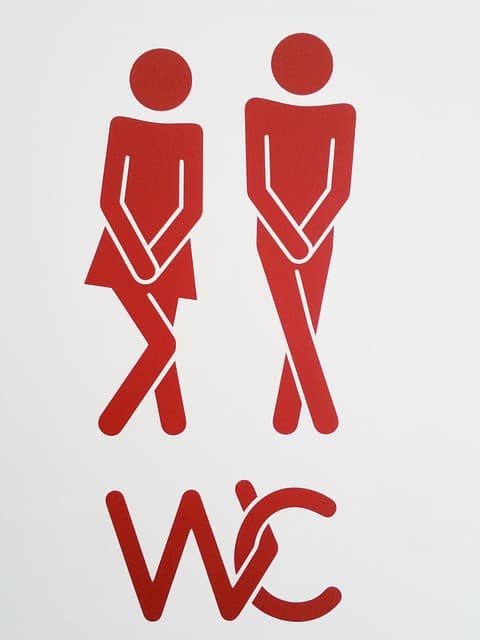 I could understand it better if there were no toilets around, like in the case of my toddler brother who really needed to go. But most parks have bathrooms (suitable for men at least) and unless you’ve had a gallon of water to drink and have been on a bus for 10 hours, can’t you just hold it until you find a toilet?

Or at the very least, go behind a bush so you’re not accidentally exposing yourself to an unsuspecting passerby. It’s so commonplace now that I expect to see grown adult men peeing in public. And that’s not normal.

Can’t say I’ve ever seen a dude sanitize his hands after whipping out his ding-a-ling and relieving himself in public. And when everyone pees in the same spot, it stinks. Several areas in my neighborhood park stink and it’s not dog pee I’m smelling… I’ve even seen men pee on buildings such as the side of a supermarket and even restaurants.

Just the other day, I saw an older man helping his grandson pee on the side of a wall that was part of a private residence. EWWW!!! Don’t teach your grandkid to pee on private property or in public at all. Yuck.

One thing to note. In the US, although stores and restaurants don’t like it, you can pop in to use the bathroom and leave in most cases. Sometimes they’re so busy no one will even notice. In Europe, many restrooms are marked for customers only and locked. You need a code on your receipt to get in.

So are French guys just accustomed to peeing outside? Why is it an acceptable thing to do in France for men of all ages and backgrounds? I’m tired of seeing French men peeing everywhere.

And that wedding question.

I posted this on my FB page (you’ve liked my page, right?) and if you’re French and/or are an expert on French wedding etiquette, could you give me your advice below?

Two American friends of ours have been invited to their landlord’s daughter’s wedding. Our friends have lived in their building for only a year and they’ve never met the bride or the groom and just casually know their landlord (bride’s dad). They were invited to the ceremony at the mairie and a cocktail hour afterwards but NOT the reception (dinner). They’d like to attend but are unsure of what the etiquette is for a gift. They were thinking of sending something unique from the USA once they move back home in a few weeks instead of purchasing something in France or giving cash. Or is a simple card enough? Thoughts? Thank you!

It’s our one year wedding anniversary! What I’ve learned about marriage

French style: How to look French

« French pronunciation: Word pairs you don’t want to mix up (with audio)
6 Things to never say to an expat (and what to ask instead) »