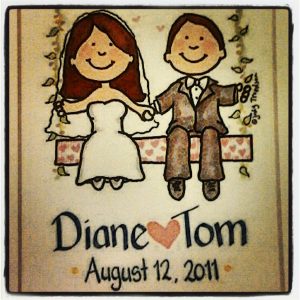 An anniversary is a time to celebrate the joys of today, the memories of yesterday, and the hopes of tomorrow.

Yeah, I know it’s cliché and all but I really don’t know where time goes. Today is my one year wedding anniversary and this time last year, I was getting my hair and makeup done, making sure last-minute wedding details were taken care of and wondering anxiously about what was in store for us. And now I’m settled in France with Tom and Dagny and couldn’t have asked for a better family.

What have I learned this year? Read on!

To celebrate our one year wedding anniversary, we’re going to Paris next weekend and doing a family photoshoot with Lindsey Kent of Pictours Paris. More on that later this month… but without further ado…

Here are the top marriage lessons I’ve learned after one year of marriage:

You’re in it for the long haul and if you focus on every little thing that bugs you, you’re going to drive everyone around you mad. Judge if it’s really worth getting upset about (clothes on the floor/dishes in the sink/toilet seat up, etc.) before you flip out. Is it the end of the world? Probably not. Let it go.

The importance of choosing someone who complements you well

Tom stays calm when I flip and is easy-going and friendly. He doesn’t get frazzled like I sometimes do and knows how to keep a level head and only get worried when there’s a reason to worry. He’s the grounding force in my life and if he was my mirror image, I’m not sure this would work.

Don’t worry about the little things

We all get stressed out and frustrated at stupid things, but try to look at the overall picture. Your spouse married you for a reason, so if you have a bad day, he/she will forgive you. Dumb little things that get in your way are exactly that — dumb little things. They don’t matter and you’ll probably look back at them and laugh. You’re a team and sometimes it helps to remind yourself of that when something challenging comes along.

Marry someone who is better than you

Now, this doesn’t mean to marry someone who is arrogant or showy about it, but I’ve learned that marrying someone with skills/personality traits you want can only work to your advantage. If you admire your spouse for everything that he is, it’ll give you something to aspire to. Tom is quick to forgive, speaks three languages, runs faster than I do and is up for anything. He always impresses me, even the little things, and I hope I do the same for him.

It’s easy to take your spouse for granted. You’ve told him he has great eyes 100 times, so why tell him again? Well, because hearing that never gets old. I think compliments are really important, and if you think someone looks good/is wearing something nice/is great at something, speak up! Everyone loves that little boost that comes from an honest compliment.

So that was the short list. I’m so happy I married my best friend and couldn’t have asked for a better husband. I never even thought I’d get married let alone meet a man like Tom, so really, I still pinch myself sometimes.

What is the best marriage advice anyone has ever given you?

What I’ve learned from a year of blogging