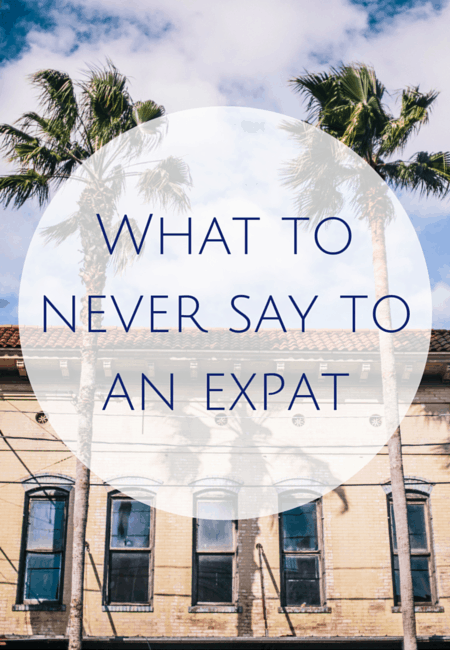 Living abroad can be the best and worst experience of your life all wrapped into one. As an expat, you’ll have so many different adventures and eye-opening moments that you’ll be bursting with excitement to tell your friends and family back home. But what happens when the conversation comes to a halt because of one of these questions?

As an expat, I’m sure you’ve heard at least one of these things to never say to an expat.

People everywhere say stupid things (me included) and sometimes they realize it in the moment, sometimes right after and sometimes they never realize what they said was annoying/offensive/dumb/hurtful. I believe that most people have good intentions. Maybe they just don’t know better or didn’t think before speaking. Guilty!

But how we react is what’s in our control. It’s how you handle yourself when you’re face to face with someone who just doesn’t get it. Do you make a sarcastic remark? Get angry? Laugh it off? Ignore it? Calmy explain your point of view?

Here things to never say to an expat:

When you live abroad, you learn very quickly who you can be completely candid with. You can’t be 100% real with certain people — and almost always those people have never lived abroad. Many out there seem to think that everyday life problems like health, family, relationship and career issues just disappear into the ether when you start breathing in that magic French air. People assume that every day is like a vacation day full of gallivanting around and doing tourist things. The reality is that every physical place on earth has pros and cons, and issues you have at home will still be there when you move abroad. Sometimes they’re even magnified because of situational factors making them seem even more dire. So steer clear of people with myopic views who think that your new country is pure paradise 24/7. Yes, certain things might be nice in your new country but the positives don’t make life problems nonexistent or easier to manage. 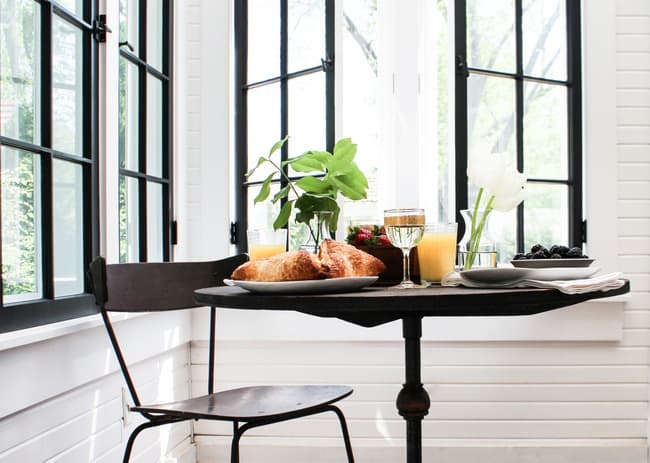 When are you moving home?

Home is a complicated concept especially when you either grew up in a bunch of places or when the place you grew up is no longer an option to go back to. Maybe we don’t want to return to where we came from. Or maybe we do but it’s not an option right now — so when you keep bringing it up, it just makes us feel worse. Or maybe we have no idea what the future holds. In my case, we bought our house almost two years ago and have put a lot of effort into making it feel like a home (painting is harder than it looks, OK?). So for me, I am home. Will we end up living in the US at some point down the road? I think so. But is it going to be anytime soon? Don’t think so. I’m OK with that. For now, let’s just enjoy our time together when I’m home on vacation!

I wish I could live abroad. Must be nice!

Out of all the things to never say to an expat, this one grinds my gears the most. You’ve heard this one before. “Must be nice” is often said in a sarcastic tone. Yeah, it IS nice. Thanks! But moving abroad was a careful choice and something I stressed over, planned for and saved for. It isn’t all roses and rainbows. There are pros and cons to everything. Living in France isn’t the same as a vacation in France, so don’t idealize it. You can travel or move abroad too. There’s nothing special about me and my decision to move abroad. We all have circumstances in life that hold us back but I truly believe that if you want something bad enough, you will find a way to make things happen for yourself.

I didn’t invite you to the party because I knew you wouldn’t be able to come.

Ouch! This one happens allllll the time. While it’s probably true that I won’t fly back to the US for a relative’s graduation party or a friend’s child’s birthday, it’s nice to feel included and remembered. Even if you know I can’t go, just the fact that you thought of me means a lot. No need for fancy invitations — a simple FB message that takes 10 seconds to write is sufficient. What sucks is when expats are just passed over. And guess what? Maybe once in a while I WILL be able to make it home and might just show up at that party (if I know about it)…

They all speak English there right? So you don’t have to be good at French?

No and no. You’ll find English speakers in larger cities but the language spoken here is French so it’s better if a newbie in France (who plans to stay for more than just a vacation) learns enough to get by. Sometimes French people are shy when it comes to their level of English so even if they know a little, they’re hesitant to use it. Besides, perception is everything so if you put forth an effort to learn the language, I think you’ll gain the respect of locals a bit more than if you refuse to utter a single word of French.

Are you fluent yet?

Fluency doesn’t just magically happen because you live in a place for a certain amount of time. Also your definition of fluent may differ from mine. There are so many factors that play into a person’s level of fluency. By asking someone if they’re fluent, you may make them feel self-conscious or like their progress isn’t good enough. And what does someone else’s fluency change for you? Not much. So let them go at their own pace. I guarantee you they’re trying really hard to get by in their new language.

Try one of these questions instead:

Those are expat questions that will help get the conversation started off on the right foot.

Anything additions to my list of things to never say to an expat?

If you missed these posts, check ’em out now…

Expat life: Things to never stop doing for yourself

Expat or immigrant? Why the distinction matters

On expat life: 5 Things I’m embarrassed (not really) to tell you