Café culture is a huge part of French life, especially in big cities. Everywhere you look, there’s another café calling your name. The next time you’re in France in need of a caffeine fix and a place to take a load off, grab a table at a café and learn how to order coffee in France like a pro with my tips. I’ll also tell you about some of the most popular French coffee options you’ll find at cafés in France.

Popular French coffee: How to order coffee in France

Starting your day with at a café with the morning paper, a croissant, and a coffee is a very French thing to do and if you want to get the whole ordering coffee in France thing right, here’s what you need to know.

First, depending on the time of day, when you show up at a café, the server might ask you if you’re there to eat or if you’ll just be ordering drinks. Generally, wait for the server to direct you to a table instead of just sitting down at one yourself. Sometimes customers who are ordering a meal will be seated in a different area, so wait until someone comes to greet you before helping yourself to a table.

Once seated, you may be given a drink menu, but if not, there might be a slate menu toward the front of the café or leaned up against a wall, so keep an eye out.

If not, here are some popular French coffee options that you can get pretty much anywhere. Be sure to always start with a bonjour and follow it up with your order and a s’il vous plait and merci at the end. Note that the French generally do not drink coffee with their meal or dessert (except for #5 below) but usually after. If you want to have coffee with your dessert, you’ll need to ask for it at the same time.

Types of French coffee to order in France

Keep in mind that un café in French has two meanings. First, it can refer to a café in the English sense of the word, a casual restaurant that usually has some outdoor seating where you can get a meal or something to drink, in addition to the second meaning which is the French word for coffee. Be aware that if you order un café, you’ll be given a shot of espresso and NOT a big cup of coffee. It’s usually quite bitter and black.

If you want a milky drink, a café crème is the thing to order. It’s light in color due to the amount of milk in it and most cafes don’t really differentiate a crème from a latte.

This is the closest you’ll get to a brewed pot of American coffee. It’s often on the strong side and served black.

This is an espresso with a hint of milk foam mixed in.

This is my favorite type of coffee because your shot of espresso comes on a plate with a small selection of mini desserts. This is served after your meal.

Technically a cappuccino shouldn’t have as much milk as #2 above, but generally I find France’s cappuccinos at cafés to be quite heavy handed with the milk with only a light layer of foam on top. Cafés also seem to charge a premium for a cappuccino.

This is short for décaféiné and is the French word for decaf. Ask for a déca and you’ll get a decaf shot of espresso.

Finally, here’s something fun that shows just how important good manners are in French. 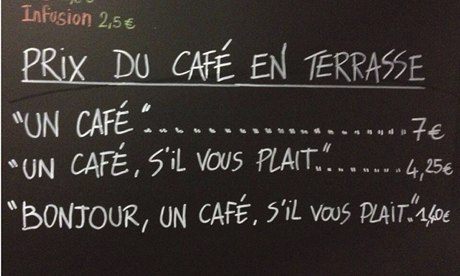 A coffee shop in Nice, France, has made the news with their chalkboard sign proving that politeness really does matter — even when ordering coffee in French.

The Petite Syrah in Nice on the Côte d’Azur has made headlines with its sign show above that proves a polite attitude will get you a coffee for just 1.40 euros.

The café owners say it started out as a joke, but in an attempt to turn it around on customers who say that servers are rude, the managers decided to “hit impolite customers where it hurts, in the pocket.”

We know the French are polite but what about tourists just trying to get a quick French coffee? We’ve all been in a hurry and probably forgotten our pleases and thank yous more times than we can count, but this little reminder made me smile. Remember, always start off any interaction with a bonjour! It’s seen as incredibly rude to not say bonjour before all else.

What’s your favorite type of French coffee to get when you visit France? Hope you enjoyed this post on how to order French coffee!

« 5 Things that surprised me about blogging
Champagne alternative: Consider Crémant and save a few bucks »