Succulent duck, hearty beef bourguignon and some of the best cheeses and desserts in the world… 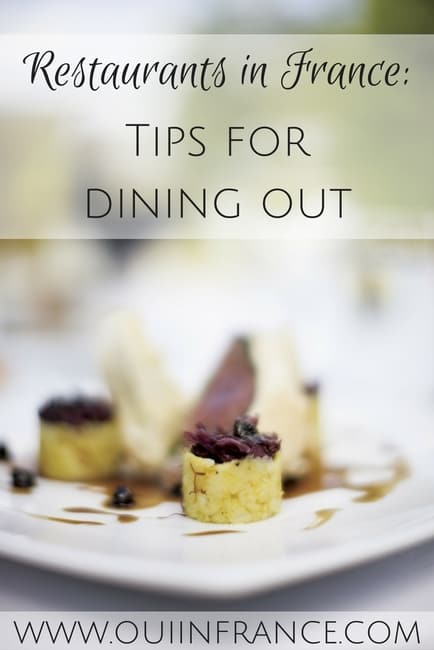 Eating out in France can be a one-of-a-kind experience that you’re not soon to forget. From top rated restaurants to cuisine like nowhere else in the world, French food ranks high on my “why I love France” list. But even if you’re not a foodie at a fancy restaurant, there are still some things you need to know about dining out at restaurants in France.

Read on for more on restaurants in France!

On restaurants in France 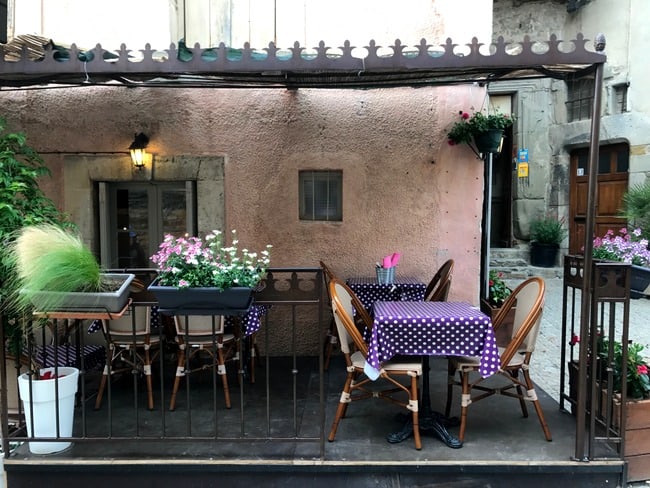 Dinnertime starts at 7 p.m. at the absolute earliest

Americans — especially those with kids — tend to eat dinner earlier than the French. Keep in mind that aside from touristy areas, restaurants aren’t even open until 7 p.m. for dinner service. If you’re accustomed to eating before then, you’ll have to adapt, but I’m proof it can be done. Early dinners just aren’t part of the culture here so if you try to make a reservation for 6:30 p.m., you’ll most likely be told it’s not possible. So what do you do? Eat a late lunch so you aren’t starving at 6 p.m. or have a snack to tide you over.

Many restaurants in France are NOT open all day

If you’re in a smaller/non-touristy towns, most restaurants serve food only at mealtimes and often close in between lunch and dinner or only serve drinks. In touristy areas in Paris, restaurants are open all day long, but in the country, this is not the norm. So if you’re looking to have a late lunch at a specific restaurant, call ahead. Generally, lunch service stops at 2 p.m. and dinner service begins at 7 p.m. or a little after. 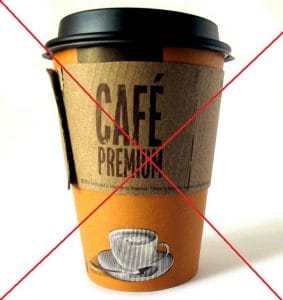 Unless you’re in Paris or another big city and go to Starbucks or a competitor, the concept of taking coffee to go in a paper cup is quite rare and not part of French culture. Coffee is not sold to go in bakeries or cafes, so if you want your morning cup of java (and you aren’t in Paris), be prepared to sit down at a cafe, go to McDonald’s, or make it at home.

At restaurants in France, do not ask for your meal to be wrapped up if you have leftovers. Many establishments will find this rude and might oblige out of politeness, but many will absolutely refuse. Spare yourself the embarrassment and don’t even ask. Generally, portions are smaller than in the US so you might not have anything left over!

Ordering info at restaurants in France

Entrée is the appetizer

An entrée in French is the appetizer. The plat principal is the main course. Also, a fun side note is that French people LOVE to get dessert. Many restaurants offer formules/menus that consist of several courses which end up being cheaper than ordering a la carte. So whichever option you choose, be French and make sure you indulge in dessert.

Why you won’t get fat in France >>

Meals start with an aperitif

Waiters usually ask if you’d like an apéritif, a beverage that is usually alcoholic and consumed before your meal comes, before ordering. They’re not asking for your drink order with your meal here (so don’t tell them water at this stage). The aperitif is a beverage course and is sometimes served with a little snack consisting of crackers or nuts. In many cases, it’s fine to say no thank you, but waiters just about always ask if you’ll be ordering an apero and it’s certainly part of French culture.

If you want tap water, you need to ask

At restaurants in France, if you want regular tap water, you need to ask for une carafe d’eau. Otherwise, if you don’t ask, water won’t be brought to you automatically. When you do ask for water, make sure you don’t just say de l’eau s’il vous plait if you want regular tap water. Most waiters will bring you a brand name bottled water and might not even ask if you want the free option or heavily marked up Evian. You’ll realize your mistake when you see the extra 10-euro charge on your bill.

If you need more water, wine or bread, you have to ask

In most French restaurants, you won’t receive a refill on anything unless you specifically ask for it. Sometimes staff will automatically bring you another carafe of water but they aren’t as customer-focused as servers in the USA. If you need something, catch the server’s eye and politely ask.

Try to use a little French

No one expects tourists to speak anywhere near perfect French, but even a small effort with the language is appreciated. I often hear tourists saying thank you and please in English, which is better than saying nothing at all. It’ll be understood. But honestly, how difficult is it to say merci and s’il vous plait? Even if you speak nothing beyond those two words, make an effort to say what you do know! Don’t be shy even if your accent is far from perfect. You’re the guest if you’re a tourist in France, so do your best to be respectful, s’il vous plait! Here’s a handy guide with audio I put together so you can brush up on your conversational French! 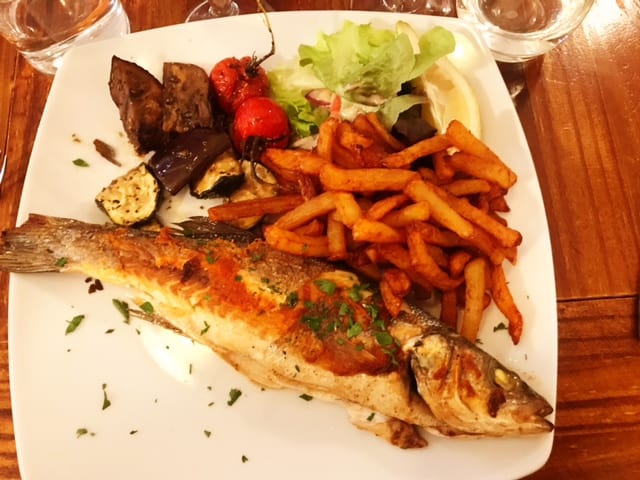 Paying at restaurants in France

You have to ask for the check to pay

When eating out in France, you have to remember the check isn’t always automatically brought to your table at the end of the meal. In most cases, you can sit at a table for as long as you want and no one will be rushing you out the door. When you’re done with your meal, simply ask for l’addition s’il vous plait.

This is not seen as impatient or rude if you’ve been waiting awhile. Sometimes the waiter isn’t available and if you’re ready to leave, feel free to get up and pay at the register.

How my eating habits have changed since moving to France >>

When you pay by credit or debit card, the payment terminal is often brought to you at your seat

The waiter doesn’t take your card to a register in the back somewhere to ring you up. The card never leaves your sight.

Leaving a tip is not customary

The service is included in the prices you see on the menu. If you have extra coins at the end of your meal, you can leave a couple of euros at a casual restaurant if the service was exemplary, but definitely not 15% or more. At a fancy restaurant, if the meal was worth it and the staff went out of their way for you, feel free to leave a small tip. It’s at your discretion. Remember 2 things: In France, servers are paid a livable wage and do not depend on tips to make ends meet. If you do not leave a tip (or nothing beyond rounding up to the nearest euro at a cafe), no one will look at you sideways. The 20% tipping culture in France does not exist. Leave what you’re comfortable with. 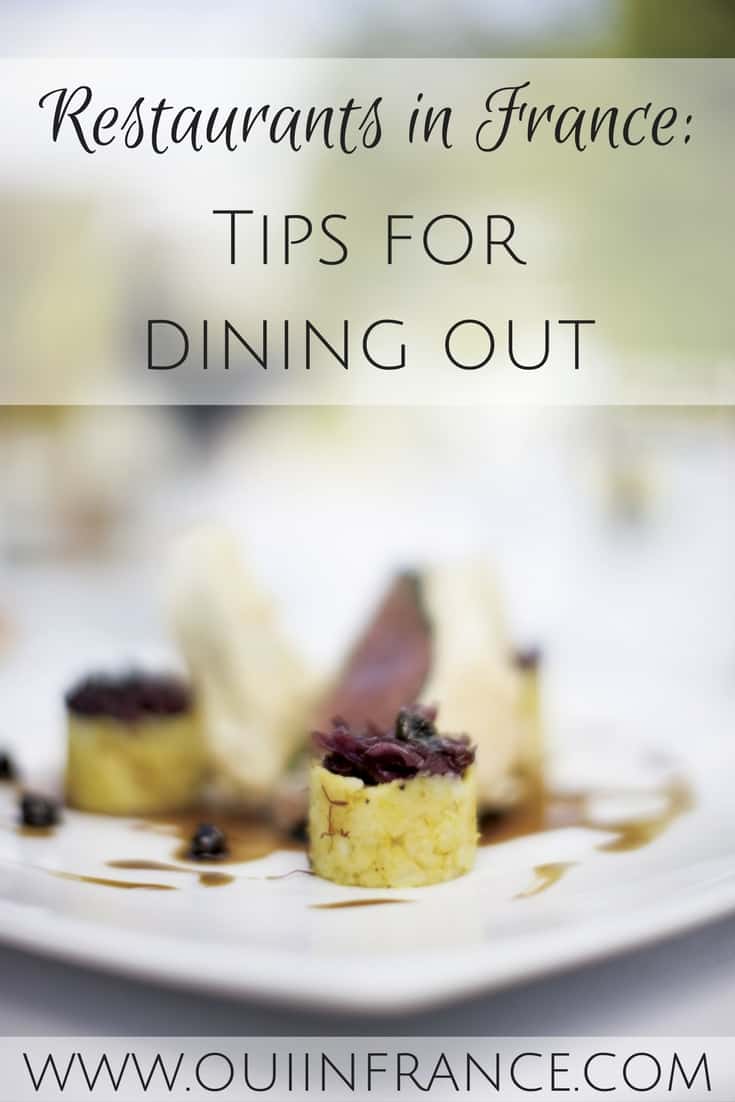 10 Tips for not embarrassing yourself at the French farmers’ market