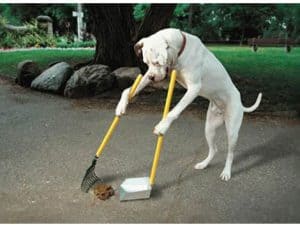 I recently posted about the problem with dog poop in France and am still completely baffled by the lack of common sense here when it comes to picking up your dog’s poop. But I do have one theory as to why poop is left all over the streets and parks — to give French people jobs. Jobs, you ask? One word. Motocrotte.

WTF is that? Read on!

When I say jobs, I’m not talking about pet waste removal companies that are popular in many areas of the United States where someone comes in and *gasp*, get ready for it, actually picks up your dog’s poop for you. I’m talking about a good, old-fashioned, motor scooting type of contraption that does none other than, well, picks up poop from the lovely streets of Paris and beyond. Sorry, I meant to say aspirate. The Motocrotte is a motor scooter that aspirates dog poop in France with a nifty poop vacuum device that sucks up the poop behind the driver. Poof! Now you see it, now you don’t!

In French, crotte means “droppings” and in this sense refers to dog poop. So these lovely scooters, Yamaha XT 600s, are basically poop motor scooters that go around and make quick work of all the dog poop in various French cities — that the dog owners didn’t pick up on their own.

The PooperScooter. The MotoPoop. Hey, however you want to look at it, it just sounds nutty in English. Could you imagine one of these cruising the streets of New York City? Me neither.

Here’s a Motocrotte in action:

And what’s the driver called? I’m not even joking. The motocrotte is piloted by a motocrotteur. Aw, French language, you’re so cute. In English, I guess the guy who drives the Pooper Scooter would be called the Pooper Scooter man, the Poop Troop or maybe the Moto Poop Man. Having your dog’s poop motoscooted is totally glamorous and WAY cooler than just using a poop bag, right? Ben, oui!

So here’s a question. What came first, the inability of the French to pick up poop or the Motocrotte? Do people not pick up the poop because they’re relying on the Motocrotte to come lend a hand or did the poop problem get so out of control that the city implemented the Motocrotte to clean up? The latter sounds right to me… Either way, the Motocrotte project is a thing of the past. The project was halted in 2002 after it was determined that only 20% of the city’s poop was getting cleaned up for an exorbitant amount of money.

Apparently there were 100 motocrottes in Paris and they were driven by men clad in green suits. They picked up over 100 kilograms of poop per day! That’s IT?

Do these guys date?

Have I seen a Motocrotte? Thank god, no. There’s ridiculous and then there’s RIDICULOUS. I’d probably die laughing. But hey, anything to keep the dog poop in France situation under control, right? What’s next?

When a dog walks toward an oncoming bus…

« pics of the month: June
Top Etsy dog shops: My product picks for your pet »