For the record, it’s absolutely illegal to make a right turn on red in France. How do I know this? No, not from a driver’s course or even from a conversation with a French person. I know this is illegal because I was stopped by a motor scooter cop at 2 a.m. and learned the hard way.

Did I get a ticket? Read on!

It was Halloween night 2009 and I had just arrived in France the month before to teach English. We were at a party in Angers, France and my husband (BF at the time) and his brother were in no condition to drive at 2 a.m. when we left, so I took it upon myself to be the designated driver.

I had been studying the roads and the dumb traffic circles that are every 5 meters in France, so I was ready. Or so I thought. It was really late and Angers looked like a ghost town without a car in sight.

I got to a red light and figured that a right turn on red was no big deal.

It’s perfectly legal in NJ, so without hesitating because it’s second nature, I turned right at the red light and continued on my way. Right after I did that, I wondered if it was OK in France and Tom’s brother informed me that it is indeed illegal. I figured oh OK, good to know for next time. But not so fast… 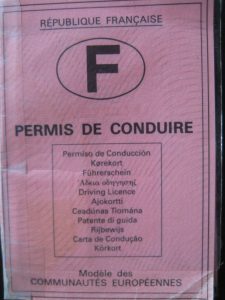 Out of nowhere, two cops on motor scooters came right up to the car and pulled me over. Oh great, two drunk dudes and an American without her passport on her at 2 a.m. on the side of the road. Now let me take a moment to explain that I do not have a French license and mixed with the fact that my passport was at home, the situation just wasn’t good. My flimsy NJ license means nothing here. The passport is my only real form of ID and I leave it at home most of the time so it doesn’t get stolen.

So now we’re on the side of the road and Tom’s brother jumps out of the car to explain the situation to the cops.

Now in the US, if you get pulled over in the middle of the night in a deserted area and a dude jumps out of the car, the cops would find that so aggressive that you’d probably have a gun pointed at you within seconds.

Not so in France. The cops didn’t seem to care that a guy got out of the car and rapidly approached them. They just ignored him and walked right over to me.

I explained that I only had my NJ license, no passport on me, that my friends were a little drunk and I was being the responsible one driving them home. I continued on about how I am American and in NJ you can make that turn and I was so sorry and it was a dumb mistake, etc. My French has never been better than it was that night! He walked away for a bit to confer with cop #2 and came back with a breathalyzer contraption. Since I hadn’t been drinking, I knew a 0 would register and was hoping like crazy that I’d get off scott free. It came back negative for alcohol and after a little speech about the usual fines (in excess of 300 euros on the spot for not having a passport), he let me go with a warning. I breathed a major sigh of relief.

As the cop walked away after his big lecture, I began to realize just how badly that could have turned out. I could have been majorly fined and if I had been drinking, I probably would have ended up in jail.

I was really lucky that night. So remember, do not make a right turn on red in France!

Have you ever made some major driving faux pas while in a foreign country?

When you find something that isn’t yours

« The virtue of patience: A trip to the post office in France is never quick
France’s frozen grocery store: My favorite Picard foods »