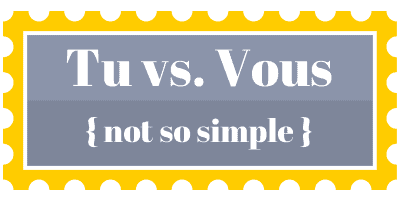 Making mistakes in a foreign language can be embarrassing but we all have our fair share of flubs. For example, one of the most difficult things for English speakers learning French is the difference between tu and vous. Both words mean “you” but tu is the familiar term and vous is the polite form. On the surface they seem easy enough to distinguish between, right? Wrong. So to help us non-native French speakers out, Tom is shedding some light on this often confusing part of the French language and telling us the difference between vous and tu.

What is the difference between tu and vous in French?

(First, two things. 1. This post is pretty thorough. Tu and vous aren’t so simple and I feel it’s important to hear about the subtleties of tu and vous in French from an actual French native, so sit back, relax and dig in. 2) The pics below have nothing to do with tu and vous but they are from our weekend and wanted to share them with you at the same time. ;-). Enjoy.)

A few months ago I had an appointment with a new hair stylist (a man about 15-20 years older than me). Before the appointment, I diligently made sure to look up any words I wasn’t sure of along with irregular verbs and their conjugations with “vous” just in case I needed to use one when talking about my hair. There’s nothing worse than pausing mid-sentence to realize you have no clue how to conjugate the vous form of an irregular verb. So I was on top of things, or so I thought. But then I was thrown a curve ball. ..

Once I sat down, before we even got to small talk, he abruptly asked me if it was OK if he could use “tu” with me (tutoyer is actually the verb meaning “to use tu” with someone). “Of course,” I said, realizing all my research of vous verb forms hadn’t been necessary at all.

So here we have someone who is older than me who I didn’t really know who wanted to use the informal tu with me from the get-go. Is he just really relaxed? What is the difference between tu and vous in French and when do you use each one? 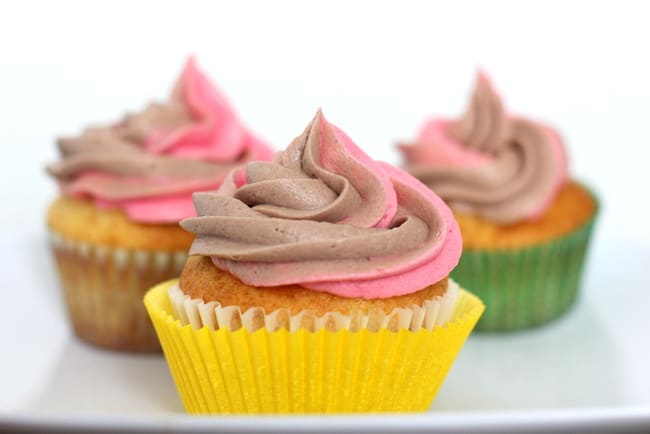 So to help clarify things, Tom (if you’re new around here, Tom is my French husband who writes on my blog sometimes) is taking over to help us with the difference between tu and vous in French.

Hi guys, glad to be back. First, let me give you some background on the difference between tu and vous in French.

Until the end of the 18th century, French people would almost exclusively use the « vous » form in their daily communication. Today the use of tu is way more widespread, especially among younger generations. Believe it or not, the evolution is usually attributed to the influence of the English language in which « you » is seen as the equivalent of the French « tu » (even if it’s not necessary true). As you get to know someone, the transition from « vous » (formal) to « tu » (informal) is a frequent ritual that shows the evolution of a relationship. Using « tu » actually means the relationship is closer, more intimate, with fewer formalities in interactions, communication and even in the topics of conversation. This change to the looser tu is noticed immediately by both parties of the conversation and a kind of physical and mental loosening occurs.

The transition (from « vous » to « tu ») is easier between people of the same gender, and their age is an important factor too. That transition is often made formal by a question asked this way « could we now use the tu » (it’d make things easier)? or « would you mind if we used the « tu »? but sometimes it just happens without any formal asking process. And for the record, switching to “tu” isn’t a necessity at all — it’s not because it’d be easier to conjugate with tu or anything like that.

Personally speaking, I actually transition to tu when I know I’m going to see the person again (otherwise I wouldn’t bother, I’d just use “vous”). Like at work, even if I’ve been working at the same place for a few years now, I still don’t know everyone. I sometimes talk to coworkers on the phone and I absolutely don’t know them (maybe I’ve seen them once in the hallway without knowing who they were). So when one of those “new” coworkers calls me (for any reason) here’s what I do: I use vous, then if the voice and the tone are rather “young” I sometimes switch to “tu” within the conversation.

If the voice sounds a little older, I stick to the vous for the first conversation, and try to throw a little, “A plus, bonne journée” at the end of it, just something not too formal, and it usually allows me to start the next conversation directly with “tu” (or I allow myself to do it! Haha but it’s never done rudely).

Because the important thing is the longer you stick with the vous, the harder it is to switch to tu later on!

My mom has had a friend for more than 20 years now and she still use vous with her, while she uses tu with all of her other friends. Why? Just because she “missed” the transition point, after a while, you get too used to using one form or the other, and you just can’t switch — it’d be too weird!

So about he difference between tu and vous in French. For familiar situations, use tu. If you’re speaking to a child or someone younger, use tu. Same for family and friends.

Some notes on “tu” usage:

Basic rule: For familiar situations with friends and family and those you know reasonably well, and for those that have OK’d the usage of tu.

Real-life example: The other day I talked to our neighbor (first time since we’ve moved, which was about 6 months ago! Yippy!), and of course I used the “vous” even if he’s probably around my age (I don’t know him yet, and I’m not sure we’re really get to know each other). His kid (who is around 4) was with him and talked to me using tu. If the same kid talks to me in a few years, he’ll naturally say vous because he’ll know that he has to use it with someone older that he doesn’t really know (unless we become friends with our neighbors, but it seems unlikely so far!).

Some notes on “vous” usage:

There are a few cases where one half of the convo is allowed to use “tu” while the other half uses “vous”:

In these cases, the use of vous is a mark of formalism, but also an indicator of social hierarchy that shows respect (toward other individuals in some situations).

Basic rule: For any type of formal situation when you don’t know the person well. When in doubt, use vous!

Real-life example: At work I use tu with my coworkers (the close ones, and the other ones as I get to talk to them). I also use tu with my boss, my boss is way older than me and is in a superior position, but I’m “allowed” to use tu only because she asked me to do so on the first day. In my old job, I’d say vous to my boss because he’s never asked me to do it another way. To complicate this, I use vous when talking to my big boss, who talks to me using tu! And my boss talks to my big boss using tu. Isn’t all that crazy? Well, actually no, it’s the regular way in French companies. It just depends. In some industries people use tu more frequently because it’s supposed to be more relaxed (young companies, for example). 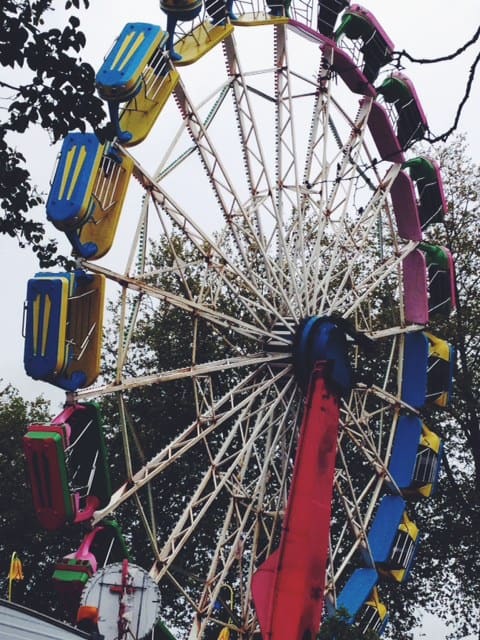 When meeting someone for the first time, choosing between vous and tu isn’t always easy and it’s even worse if French isn’t your mother tongue.

In some situations, we hesitate and we have to verbally figure out which form is better. Even if the contact is warm and friendly, it’s wiser to use « vous » until the moment when both parties decide on what’s best. Usually it’s the older person or the one in the superior position or the host who will decide and say something like: « maybe, we could use « tu » ? In the case of my boss, she just said right away “I don’t want anyone on my team to use vous with me, so it’ll be tu,” leaving me no choice.

Also, some people are more at ease using tu, and they’ll just do it naturally. Some people also try to gain an advantage by using tu,  trying to create more confidence and the feel of a closer relationship. At work, I always talk to clients using vous, to keep a formal barrier between us. But I use tu with some partners because we have a more relaxed relationship.

Some situations can be quite confusing with tu and vous in French. Take for example a recent meeting I had with a supplier and my big boss. Since I know this supplier pretty well (we often meet or talk on the phone) we use tu together, but at the meeting, we used vous, because my big boss doesn’t know him and because I didn’t want him to think that we were closer than what it should be. It’s exactly the same situation that could occur between attorneys. Some of them are almost friends, but if they’re opposed in a case they’ll formally use vous in court.

Also, when talking to someone in a position of service, we use vous, to indicate respect. So that means use vous with the cashier at the boulangerie, the waiter at the restaurant, the doctor (only Diane uses tu with the doc! Haha).

So to wrap up, keep in mind that the use of tu or vous is totally natural for a French person, and I understand how it can turn into hell for a foreigner, and especially for those learning French whose native language doesn’t make such a distinction. But with just a little knowledge of some basic rules, anyone is able to “survive” among French people! 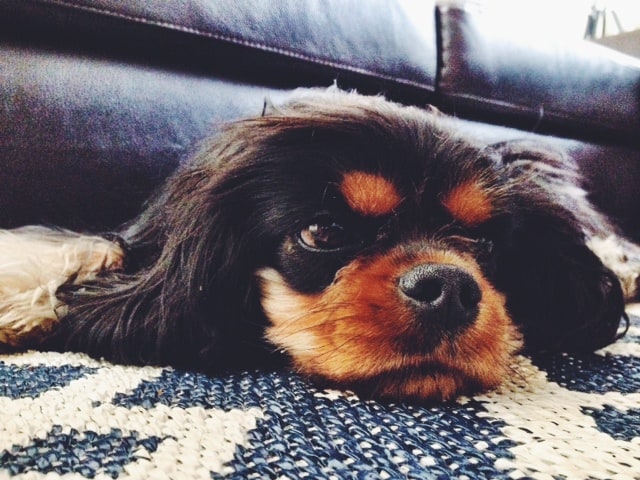 And one last thing about know what is the difference between tu and vous in French: When talking to a pet, always use tu even if you’ve never met him before and he looks old. 😉 (unless you want to make people laugh!)

As always, a big thanks goes out to Tom for taking the time to write this post on the difference between tu and vous in French for my readers. I learned a few things and hope you did too!