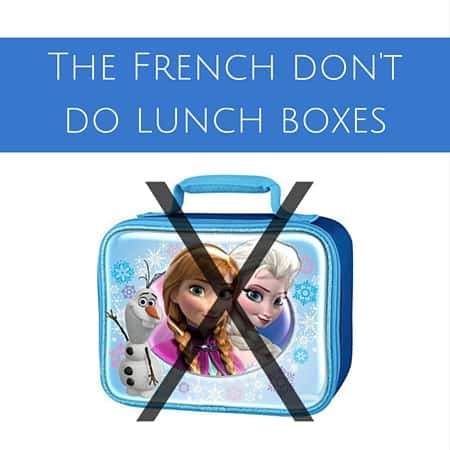 Even though I’m not in elementary school anymore, I like packing a lunch (or at least some snacks!) if I know I’ll be out all day. The last time I went to Paris and knew I’d be stuck in an office all day, I stuffed some leftovers in a plastic grocery store bag with an ice pack and shoved it in my backpack. We do the same thing when we do long walks with Dagny and want to eat in the park. I figured it was time to buy a lunch box once and for all after my one ice pack exploded, but would it be easy to find one? Nope.

The French don’t do lunch boxes

On the surface, living in France can appear very similar to life in the USA. I’ve said this before and believe it to be true most of the time, but then you start to see little differences creep in that remind you that life here is not the same. Case in point? Lunch boxes. Good luck finding one in France if you want to take your sandwich from point A to B.

Lunch boxes are so commonplace in my mind that I wrongly assumed you could find one anywhere in France. Like the grocery store or a home goods store. That is not the case.

In the USA, lunch boxes are extremely common for school-age kids, commuters and anyone who doesn’t eat lunch at home and doesn’t want to drop $10+ on takeout. They come in all different styles including hard boxes and soft bag styles and even ones adorned with popular kids’ characters from movies to give your lunch some style. You can get a lunch box at Target, online, the grocery store, etc. and there are a plethora of styles from which to choose.

The other day I was packing up a few sandwiches to take with us and I asked Tom where I could get a lunch box since I figured it was about time. I wasn’t looking for anything fancy. He said, “Oh, we don’t really have those.” Really??? Really.

What do they have in France?

I thought about it for a second and realized I had never seen any type of lunch box while out and about.

I’ve seen small coolers and insulated bags for frozen products at the grocery store — we have those in the US too  — as well as bigger coolers for camping and all kinds of handbags and totes that aren’t for food. But what about an insulated lunch bag? Or a kids’ lunch box in a snappy color? Can’t say I’ve seen any of those.

Luckily for fellow lunch box seekers out there, in some of the more trendy stores you may be able to find an American-style lunch box. I actually saw a pink one in Galeries Lafayette last weekend and it said le lunch box on it. But it was all alone on the shelf nestled in with other hip little trinkets.

Still not quite sure if lunch boxes were a thing (that maybe I just hadn’t come across), I looked up the word lunch box on handy WordReference and they offered a translation of boîte à lunch in Canadian French but nothing for France.

Why? The concept is foreign.

French people do understand what a lunch box is and some probably have found one somewhere, but they don’t need them for daily life as much as we do in the USA, so duh, that’s why they’re not commonplace. A lunch box is part of American culture. Kids have the option to bring their lunch to school each day. That doesn’t exist in France. If you’re a school-aged kid, you either eat a hot meal served in your school’s cafeteria or you go home to eat with your family. No lunch box needed! As an adult, if you don’t commute to work, you probably go home for an hour or so to eat. And even if you do commute to work, you probably don’t pack your food and wolf it down at your desk for a working lunch (some professions do I’m sure, but it’s not the norm like it was for me in the US).

If you do bring your food with you somewhere once in a while like on a hike, you probably opt for a little personal cooler box thing and that works just fine. Going to get myself one this weekend!