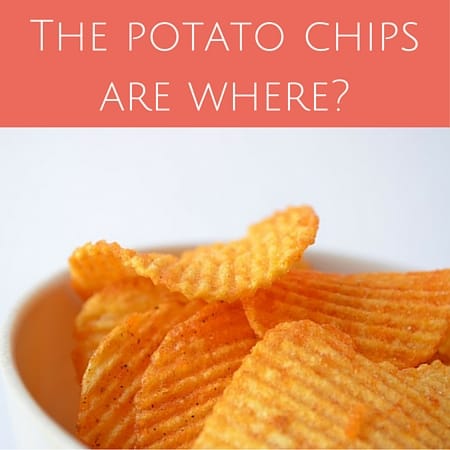 If you’ve ever spent any time walking around a French grocery store, you may have noticed that the potato chips are in a completely different aisle than the Doritos, Pringles, pretzels and other foods Americans would consider snack food. I often find myself wondering WHY about lots of things in France… because things seemingly don’t make any sense to my confused American brain. Including the location of potato chips in France grocery stores.

But to the French? All of this makes perfect sense. Let’s talk about these French potato chips.

French grocery store oddity: The French potato chips are where?

I like when similar items are grouped together. It’s just easier that way and when it’s 3 p.m. on a Saturday and the grocery store is packed, easy is what I desperately need. This post dates back about 4 years when Tom asked me to pick up a few bags of chips. I was in a grocery store I rarely went to and for the life of me I couldn’t find them. I found the pretzel balls no problem. The peanuts, Doritos, cheesy chips, Pringles. They were all grouped together in what I considered to be the snack aisle. Easy. But I couldn’t for the life of me understand why Super U didn’t have any potato chips. I later realized they did have potato chips but they were 6 aisles over.

So where the heck were these elusive French potato chips??

Well in a separate section, of course.

Exhibit A: The snack aisle, where you grab your eats for apéro 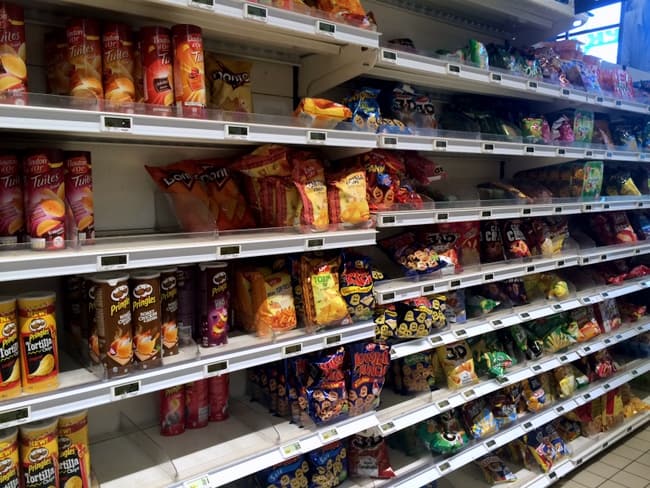 This aisle has common snack foods like nuts, tortilla chips and crackers and basically everything BUT potato chips.

Exhibit B: The French potato chip aisle (in a totally different section of store) 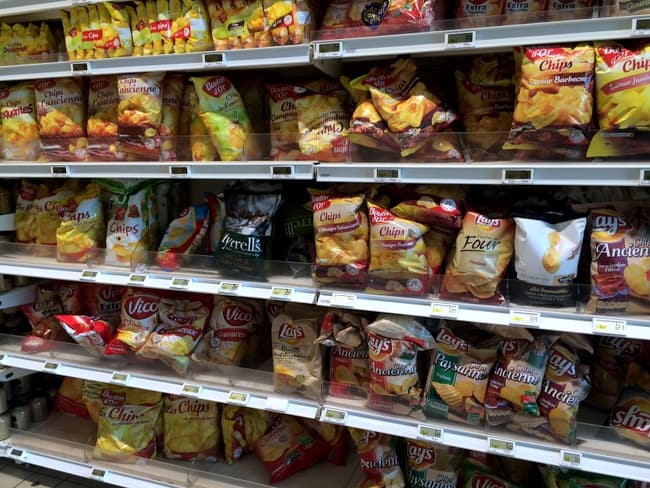 (if you’re new here, Tom is my French husband who makes an appearance from time to time)

“For french people, potato chips aren’t really considered snacks. They’re more assimilated as a side dish that goes with a meal. For example, it’s something that people would eat with a roasted chicken (like you could have fries, or you can have potato chips instead). Or people really appreciate chips to accompany their sandwich at a picnic, or also when they’re having a BBQ. Chips go well with grilled food. The snack foods like Pringles and others are used for the ‘apéro’ (apéritif); that’s also why those munchies are called ‘gateaux apéro’ (gateaux apéritif), so it’s the kind of snack you have before the real meal. For example, when you have guests over for a dinner or so, you put cheese balls, Curlys, Pringles etc. on the table (usually you start the apéro not at the dinner table but at the coffee table) with a drink (wine, kir, beer and other alcohol). So snack foods like crackers or Pringles are really not something that a French person would use in a meal (although I guess it could happen but would be very uncommon). They head to the potato chip aisle for that!”

There are even a few French potato chips on the packaging of these chicken pieces: 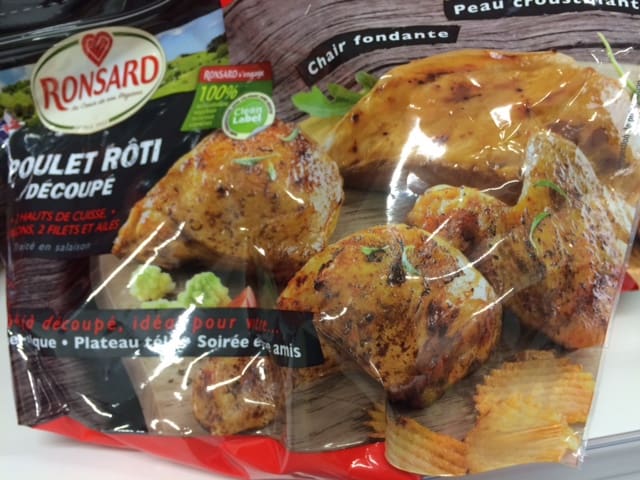 By the way, you say potato chips in French like “sheeps.” The French pronunciation is sh not ch and more or less just like the animal that says bahhh. Next time you’re on the hunt for a bag of potato chips in France, remember that they’re not with the Pringles!

Have any foods in France surprised you? What French potato chips are your favorite?

« Monday Mishmash 8/20/18: My YouTube channel & more
Where to buy American food in France »