***Hello there, I’m on vacation in Corsica and have set up a few guest posts from readers who have kindly offered to fill in for me in my absence. Show them some love, will you please? I’m sending everyone who submitted a post a HUGE thank you!*** 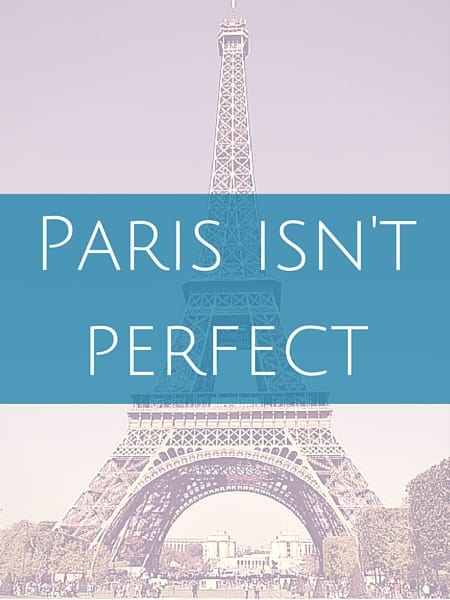 Coming at you today is a post from Shelby who blogs over at The Wander Prone. She lives in Paris and blogs about all sorts of things including books and her cat Lucy Belle.

When someone mentions Paris, what’s the first thing you think of? 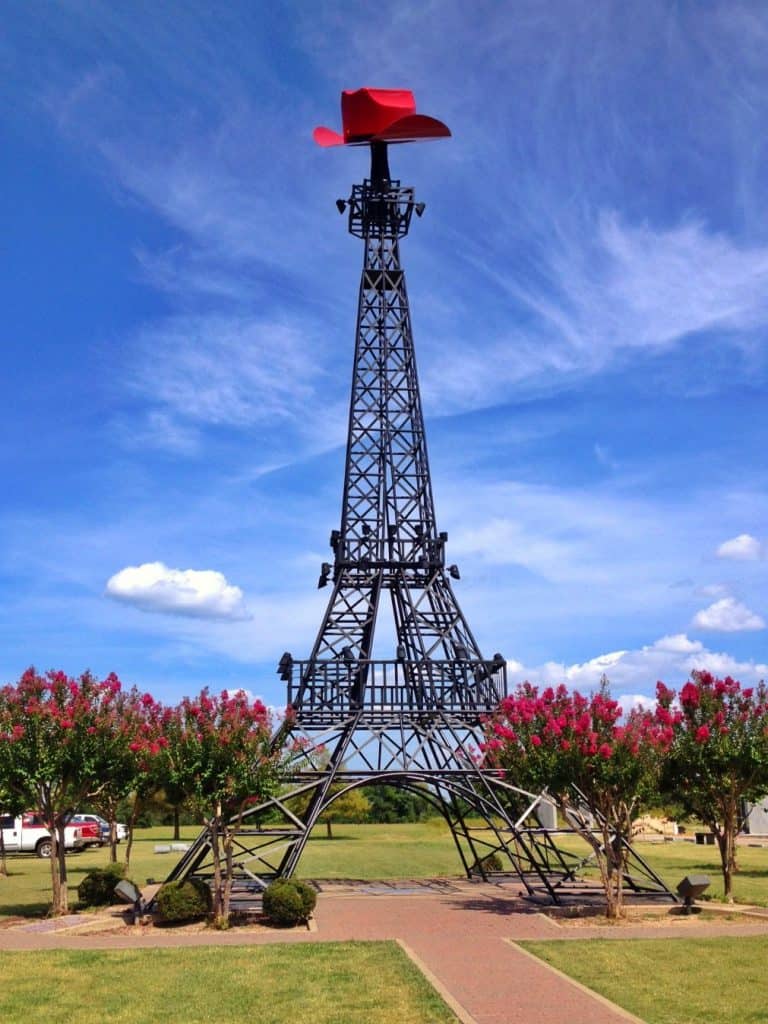 If you’re from Texas you probably said “Paris Texas?” and are proudly thinking of this:
In which case, thanks for being obnoxious, but you did partially answer my question. What likely comes to mind when thinking about Paris is the Eiffel Tower, that and other famous monuments. Paris is famous for being a city of unmitigated beauty, history, elegance, and a stream of other words that really mean special. Paris is special and magical and it seems like everyone dreams of their very own romantic version.

The first time I ever went to Paris I was sixteen years old. I don’t think I could have been more excited, and I listened to an insane amount of Edith Piaf before I went just to ensure I was as prepared as I could be (and because that was all sixteen-year-old me knew of French music). Even though it was just a three day stop-over with my dad before we headed to Verdun to spend the rest of the summer with my cousins, I was going to Paris. 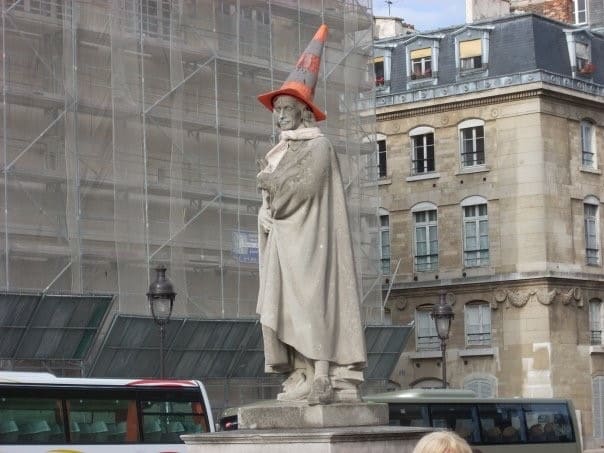 And I hated it. I mean absolutely hated it. The city was filthy, people were everywhere, my French wasn’t as good as I had thought, and horror of horrors there was a traffic cone on a statue’s head.
I was appalled. What sort of place showed so little regard for its history? Why was there trash everywhere? Not only that, but the proliferation of homeless people and the numerous times we were approached for money or to try to get us with some scheme had me swearing never again to go to Paris. I saw no point, after those three days I had seen most of the major monuments and it wasn’t like I wasn’t going to be spending the rest of the summer (and many other trips, as it would come) in France, so I left Paris happily shaking the dust off my shoes.

I’ve been wanting to write on this particular subject in some way or another pretty much since I moved to Paris in December. It was the fact that all of the sudden my Instagram pictures were racking up the likes and comments or people talked about how lucky I was (like I hadn’t worked and struggled and thought long and hard about moving here). What finally clinched it was when some members of my family went on a cruise a few months ago, and I told them I was jealous.

“But you live in Paris!” my aunt replied. That’s right, I do live in Paris. It’s a city where people come for vacation, to go see Versailles and walk through the Louvre and probably step in doggie doo because they were too busy looking at some marvel or another.

Paris is marvelous, that’s very true. It’s also crammed with people, and let me tell you that the personal bubble does not exist here. People will stand right up next to you, and not just on the public transportation. You could be doing something as innocuous as waiting in line at the post office and some old lady is so far up your butt you have distinct fear she might get stuck there.

Americans, it seems, are veritably obsessed with personal hygiene. We bathe daily, if not multiple times a day. Our deodorant is fierce and mighty and probably gives us health problems, but by God we lather it on our armpits and pop an extra stick in our purse or gym bag. It is a bit of a hard learning experience to realize that some places are not as worried about it as we are. In fact, in some places they seem to embrace the armpit stank. They let it flow free as they hold the handle above your head in the metro or reach over you in the grocery store or stand uncomfortably close in the post office. “Embrace it” the stank whispers as it coils lovingly under your nose. “You’ll never truly be free from it as long as you live here”.

After my first trip to France, I came home (erroneously) thinking that the French were impolite. Perhaps the first thing to know about me is that I spent all my formative years raised in Texas by a Southern mother – I have very specific ideas of politeness. The French are very polite, but it’s a different sort than I’m used to. I say this because I don’t believe the idea that Parisians are rude is true – on the whole they’re not. But they do not have the same societal understanding of ‘nice-ness’, especially in customer service arenas, that Americans (like me) are used to. As someone with over five years of experience in the service industry (working completely for tips), I know that this nice-ness is often fake, but I have to admit it’s a lot more pleasant than the near surliness that can be the norm when dealing with the day to day in Paris.

There are other things to complain about, of course. There’s no AC and I am absolutely not okay with it. It’s often gray and dreary, and when it rains it spits and spurts and you just sort of resign yourself to it. My hair is always frizzy (although that’s more of a life complaint than a living in Paris one). But then there are days like today when I got up early to get to the Notre Dame before the tourists and it was the first time I’d been in that historic church when it was actually quiet. And it was something else. Something special.

Mostly I want to remind people that expectations can set you up for disappointment. Paris is a big city, smaller than some and bigger than others, with a very large amount of people who are eating breakfast and working and meeting up with friends and taking naps and just living. It is a special place, but many places are special. It does have the Eiffel Tower, but in my opinion that’s one of the most depressing moments in a Parisian visit — you see the big metal antenna and you think, “what now?” Or maybe you’re less cynical than I am and you grab an overpriced crêpe and you push past the women thrusting clipboards at you and you stand in line for hours with your family or friends or all by yourself because you’re in Paris and you’re going to climb the Eiffel Tower and what is life if not a collection of moments in special places?

One of the best pieces of advice I got about living in Paris I think would also apply to those visiting. If you ever reach the point where being in Paris feels like just a little bit much, look up. Look up, and take in what it really means to be there, the beauty of the city itself.

And then look down again really quick lest you step in dog poo. 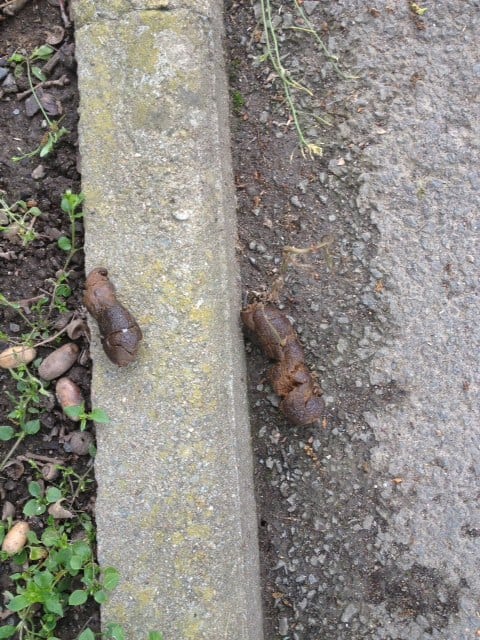 Do you love Paris? Hate it? Is it somewhere in the middle? Don’t forget to check out Shelby’s blog, The Wander Prone!