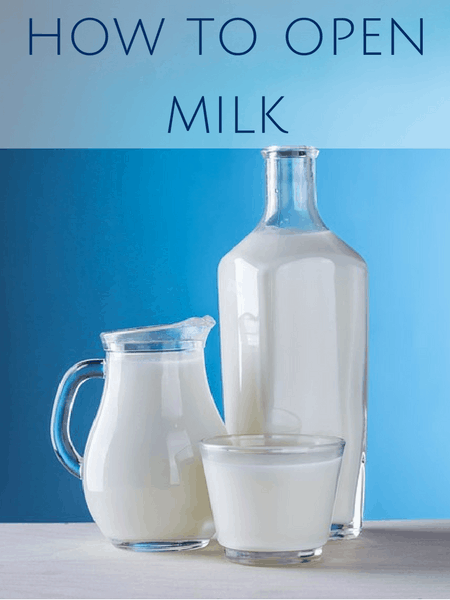 I’ve been married for 5 years now and my husband is still full of surprises! Sometimes they’re funny.

Read on about how to open milk the French way!

France is both similar to and different than life in the USA. You’ll notice the big things first, and then when you least expect it, a little difference that you didn’t even know existed will have you bent over in a fit of laughter at 11 p.m. on a Thursday. So first, let’s talk about milk.

How did this come up? I read an intriguing post about how to tell if someone is a spy on Paris Perfect and figured I’d give Tom the test. I asked him how he would open each of the containers pictured above. He looked at me suspiciously but didn’t hesitate. For the first two I asked him about (the one in the center and on the right), he passed with flying colors, but what about the American carton pictured on the left? Oh man.

He looks at the picture a little perplexed and pauses for a second. I could see the gears in his head turning. He then says (and I quote), “Well… there’s no bouchon so you have to cut. I’d get some scissors and then open the side…”

I stopped him right there.

We both had a good laugh and I pointed him to a YouTube video showing him exactly how to open a carton of milk. He’s not a big milk drinker and amen for that because I’m sure he would have figured this out the hard way. Thanks Paris Perfect for letting me know I needed to intervene, otherwise he’d be the asshole mangling a perfectly good carton of milk like this guy below:

How to open a milk carton

Why wouldn’t a French person know how to open a milk carton like the ones you’d commonly find in the US?

Because milk doesn’t come in the same time of packaging here! First, in France you can find milk in a bottle where you just screw off the top and pour or in a carton like the one on the right in the photo above. The UHT milk in a brique is stored at room temperature and shelf stable. You fold out one side, cut an opening with scissors and hope that when you pour it, it ends up in the bowl or cup and not dribbled down the side of the package. I usually go for the bottle.

Yes or no, the hard way

If you follow me on Facebook, you saw this next photo the other day when I asked for your opinion. Is it opposite day or are you just French? 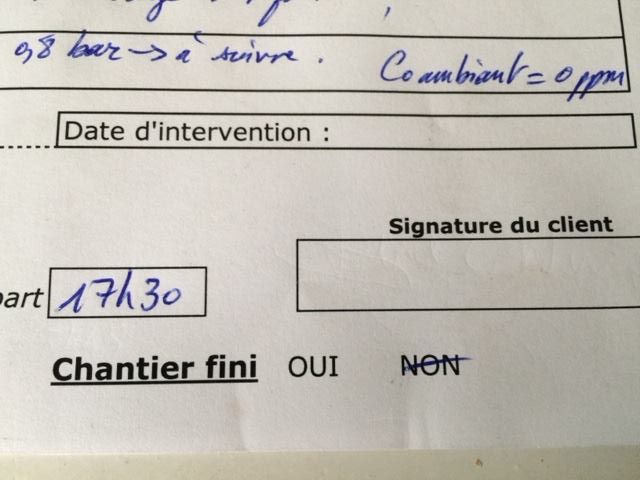 Pictured here is a part of the paper we got from our hot water heater maintenance guy. The part asking if the work is done (chantier fini) has two choices next to it, yes or no.

I said to Tom after looking at it, “Oh, the company is saying the work isn’t done.”

“What, wouldn’t he just circle oui if he meant oui? Any mark, or x, or circle on the word is selecting it… so is the work done or not done??”

Since we’re in France and I’m not French, Tom is most likely right (often the case), but what is your first reaction?

When you play the lottery you don’t put an X through each number you do NOT want to play; you fill in the ones you DO want. Seems counter-intuitive to me to put a line through the thing you don’t want. Why not just circle the one you’d like to select?

A woman commented on my FB post and said often in a situation like this you see “rayer la mention inutile,” meaning put a line through the one you don’t want. Now it makes sense. Even though that wasn’t written on my paper, it’s what the French are used to doing.

But I could see how this might lead to misunderstandings. If Tom had an issue at a store in the US and filled out one of those forms that asked if you wanted a manager to contact you and put a line through no to mean yes, he’d probably be wondering why no one is calling.

OK then, let me end this illuminating lesson on how to open milk there.

Enjoy the rest of your weekend!

My French vintage Etsy shop is open for business!

The brand new Oui In France Shop is open for business!