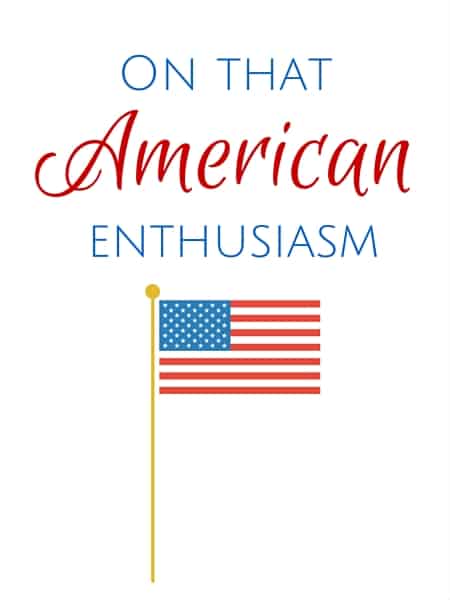 If you’re an American or you’ve observed us for any length of time, you’ve surely noticed that we tend to be an enthusiastic bunch. Not all of us, not all the time, but in general we’re kind of known for being glass-half-full smilers who like to say “awesome” and “amazing” a lot. A recent YouTube video I watched the other day on Americans and exaggeration got me thinking… are Americans overly enthusiastic? Is that a bad thing? Is it something that makes us endearing? Or makes others uncomfortable?

First, there are people of all nationalities that have all different kinds of personalities.

There are overly enthusiastic people all over the globe, including America and France, just like there are people who always see the glass half empty and everything in between.

Sometimes we’re all of these things… over the course of the same day. But I do think it’s true that Americans, in general, tend to be more enthusiastic about things than the average French person. And I love it!

American Christina Rebuffet has a fantastic English-language YouTube channel that’s aimed at French professionals looking to improve their English in a business context. Her recent video titled “Why do Americans exaggerate all the time?” got me thinking about American enthusiasm as a whole and how I express myself.

While I don’t agree with everything Christina says, I do think she provides some good examples and context that will come in handy for French people experiencing this American enthusiasm for the first time.

I don’t think that enthusiasm is necessarily exaggeration.

The other night, I opened up a container of yogurt that I had never tried before. It was from a local farm, came in a cute little glass jar, and luckily tasted as good as I had hyped it up to be in my mind. I immediately told Tom it was one of the best yogurts that I’d EVER tasted and he couldn’t help but chuckle.

But it was true!

You see, I make these little proclamations pretty often. A TV show that was one of the most interesting shows I’d ever seen, a movie that was really one of the best ever made, a new restaurant that really nailed it, etc. Tom thinks it’s funny because this American enthusiasm stands in stark contrast to his French commentary.

To show you what I mean, my French father-in-law also had the same yogurt as I did that day. I offered him a container of the same farm-made yogurt after our meal… and his reaction? Silence. He didn’t offer up any commentary, so I asked him what he thought of it to try and elicit a response.

As I expected, since he doesn’t get too excited about things like this, he told me it was “pas mal.” Really? REALLY???? It “wasn’t bad??”

Unless his taste buds were on strike, there was no way that was the best he could muster up. That yogurt was BANGIN’ and deep down he had to know it… right? This wasn’t some commercially produced brand (which is actually quite good too!) — it was homemade from a local farm! And all he could come up with was “not bad.” 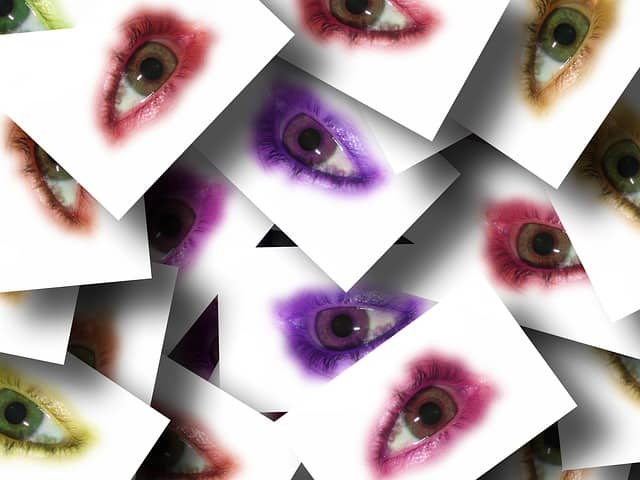 This brings me to the idea of perception.

In the moment, my affirmations full of superlatives are genuine.

The TV show or movie really was impressive. That yogurt was one of the best I’ve ever had. That sunset really is amazing. I’m not one to be fake or plaster on a superficial smile for the sake of politeness. Not my jam at all.

If I think a yogurt is really good, that’s the god-honest truth and I will tell you as much. I’m not going to be over the top about it and jump up and down and go on and on for 10 minutes, but I think being positive and optimistic can only foster more positivity.

When I’ve eaten something delicious while home alone or watched a really great video on YouTube with only Dagny next to me on the couch, I swear to you I’ve turned to my dog and said, “Wow, that was really awesome!”

Why? Just to put that little moment of positivity out into the world.

But fake, exaggerated or superficial? Nope.

I’m enthusiastic about a lot of things. Not in a smiley, hyper kind of way, but in a genuine, appreciating-the-moment kind of way. I think it’s really important to find the little joys in life and to get excited about things! Holidays, birthdays, little trips to the supermarket and sunny days.

37 Things that make me ridiculously happy >>

What’s the point of living if everything is just meh all the time?

Surely something has to excite you? I have no problem giving credit where it’s due.

If I see a stranger in front of me in line in the grocery store who has awesome boots on, I’m going to tell her. A compliment will give her a little boost. Why NOT speak up? I’ve had full conversations after chatting up someone, convos that have started with random compliments.

For the record, no one in France aside from my family members has ever complimented me on anything I’ve ever worn. I’m sure it’s possible nothing I’ve ever worn has ever appealed to someone else, but come on, I’m not THAT bad. OK, that was random but I think I’m a little sore about that.

What about that American obsession with the word awesome?

I think that Americans have become very accustomed to choosing from a handful of maybe 4 or 5 words to express satisfaction. So instead of just saying OK or great or cool, we say things like amazing and awesome to mean “ok great.”

Now was something really amazing or awesome? I don’t know — who am I to judge how someone perceives something? But in some cases, it’s just a word we rattle off to acknowledge something someone else said. A recent regular French reader of mine brought this up when he mentioned a waiter replying awesome after giving his food order. It’s just a synonym for “OK” sometimes.

But if I had to pick between the French pas mal and awesome, I’d rather hear awesome. It’s just an overall more positive tone, even if it is overused and fake at times! Kind of how the French will say bonne journee to everyone even if it’s not sincere. It’s positive and upbeat and I like it.

Now let me mention that there are plenty of Americans – and people of other nationalities – that are over the top, dramatic and superficial with their enthusiasm. It’s a put-on and gratuitous and anything BUT genuine. I don’t think that’s a decidedly American trait. I think we all have moments like this.

But most of the time, our enthusiasm is just how we express ourselves. It’s how we connect with others. It’s us putting out the type of energy we want to share with the world.

So is American energy and enthusiasm fake and exaggerated?

It can be — depends who you’re talking to. But for this American, it’s genuine and 100% in the moment –- and contagious! The kind of thing that I wish there were more of in the world.

What do you think? Ever encountered an enthusiastic American 😉

« Healthy brands in France: Natsu Foods
Customer service in France vs. the USA »