If someone passes me by on the street and something about them stands out to me, I’ve thankfully managed to be discreet about it at this point in my life. I’ll take a quick glance without staring to the point of being obvious. But when your family looks different, people can be curious and plain-out rude with their stares and looks. And unfortunately their comments.

For this post, I wanted to bring up one of Tom’s co-workers who recently visited Quebec and New York City with his family. He and his wife are white and in their 40s and they have two children — a 15-year-old boy who is their biological son and a 6-year-old girl. His daughter was adopted at birth from Ethiopia. And something about their time in the USA really surprised him…. 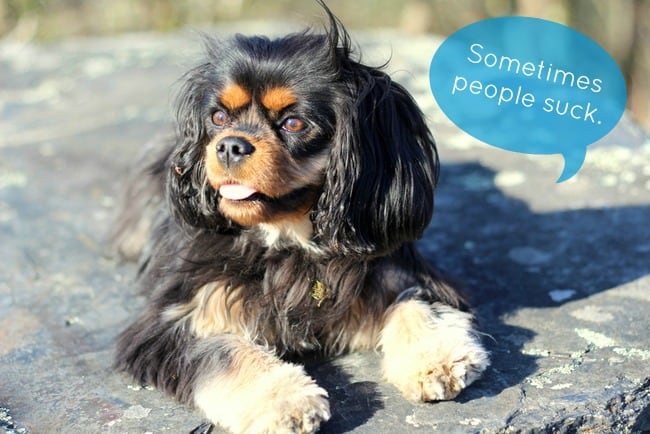 Upon returning to France, Tom’s French co-worker, Ed, told Tom all about his first-ever trip to North America and regaled him with fun stories of shopping and eating and seeing the sights. But something stood out to him and his family and he was really taken aback. While this didn’t happen in Canada, Ed said that in New York City, people blatantly stared at him and his family. They’d look at his black daughter and then back at him and his wife and son with perplexed looks. They just couldn’t put it together in their minds. Others just stared with looks of disdain.

As if the stares weren’t enough, several people stopped Ed on the street and asked him if his daughter was his daughter. His real daughter.

It’s pretty common knowledge that white parents don’t produce a black child so a logical explanation would be that the girl is adopted or that she’s a friend’s child or some other very normal explanation. Two parents smiling and having fun with their children, regardless of skin color, isn’t really a big deal, is it? It’s 2014. It’s not like he was walking around with a dancing tiger or something really stare worthy. So daughter or friend’s child or niece or whatever, who cares about the details. A happy family is a happy family.

And more importantly, as a passerby, it’s not really any of your concern.

What’s it to you anyway? What does the answer change? Not much.

I normally don’t comment on people’s kids on the street. If anything, I’ll stop them to ask about their dog. But kids? Nope. And if I saw a beautiful family that happened to consist of several ethnicities, or all the same, maybe the American in me would pay them a compliment. Maybe. It’s one thing to say, “Your family is beautiful” and an entirely different thing to ask personal questions that go from inquisitive to insulting in about 2 seconds flat. Thank goodness Ed’s little girl doesn’t speak English.

In France, Ed told Tom that he has never been rudely stared at or questioned. Not even once. If people in France are curious, they keep it to themselves.

So what is it with Americans? Have we never heard of adoption? Or fathomed that mixed-race families exist? Do people really think that an adopted child is any less real than a biological one? I told Tom to apologize to Ed because I’d like to think that Americans are more open-minded, accepting and polite than what he experienced.

And on the bright side, Ed loved New York — especially all the different foods and department store sales.

So what’s your take?

Ever been told to smile? Not in France