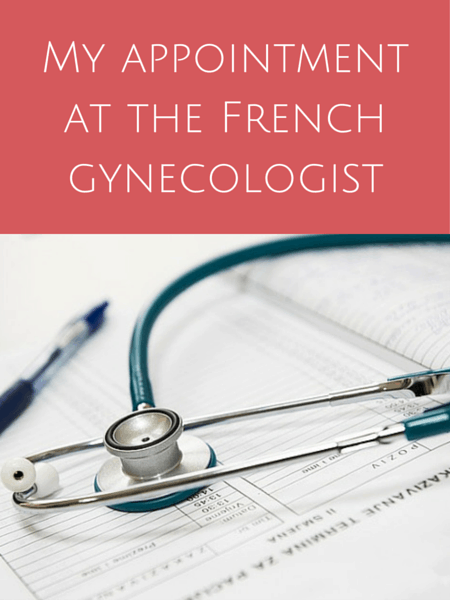 Last week, I had my first appointment with a gynecologist in France. It’s recommended to have a Pap smear every three years and I was at the 3.5-year mark, so I sucked it up, made my appointment a couple of months ago and was half-anxious/half-ready to get this over with last Tuesday morning. Why was I anxious? I was afraid I wouldn’t know all the words and I’d heard people’s horror stories about bad experiences with French gynecologists… but I figured it was time to form my own opinion and I’m happy to report back that it was way less scary than I had expected. So for any foreigners out there avoiding the ominous French gyno, you can put your fears to rest!

Here’s what my appointment at the French gynecologist was like…

Going to the French gynecologist

Please keep in mind this is just my experience with a French gynecologist and every doctor and office is going to be different. There are great (and terrible) doctors everywhere with their own ways of doing things.

Going to the doctor in France? Here’s what to expect >>

Several months ago, I looked at my options in town and made an appointment with the largest practice that’s affiliated with a nearby hospital. The doctors’ offices were all in a beautiful new building and that immediately put me at ease because everything was clearly labeled. The doctors’ names were on the doors and the waiting rooms were labeled — no guesswork! 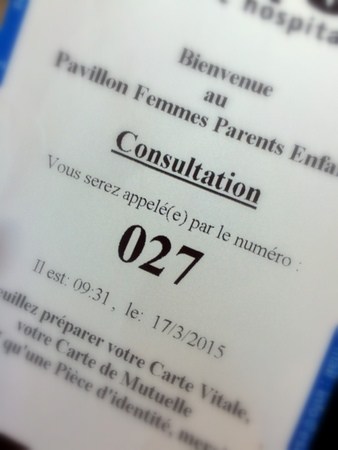 Best part of the check-in portion? I found out the entire checkup would be free. The secu picks up most of the cost and apparently my mutuelle (supplementary insurance) pays the rest, which meant 0 out of pocket cost for me. I was already liking how this was going…

My appointment was at 9:45 and at around 10, the doctor herself comes out of her office to call me in. The office had a desk, computer and a cloth partition with the examination area behind it. There’s no nurse or anything like that, and the doctor goes over your medical history herself, takes your blood pressure, etc.

She started off asking what brought me in and I said I was there for a regular wellness checkup. She asked about my health, if I smoke, my family’s health history and other basic questions. I was waiting for her to ask for the date of my last period, my sexual history, if I was married, etc. but the personal questions I was used to from back home never came.

Now for my biggest language OOPS moment in quite a while.

Because a visit to the doctor isn’t complete without me embarrassing myself.

The doctor and I were talking about side effects of vaccines and medications, and at one point I mentioned fears and how some people are scared of needles and everyone has a fear of something — maybe terrorists or flying or even being scared of the dark. On that last one, the doctor looked right at me a little surprised with a, “Ah bon??”

And I said absolutely, especially for children the dark can be frightening and they’re scared monsters are going to attack them from under the bed.

She looked horrified, kind of like a scared child hiding from a monster. I thought she was impressed with my impeccable French language skills… but nope, that wasn’t it. That’s when I realized my major language flub.

Instead of saying a fear of the dark, I had said a “fear of black people.” She thought I was a raging racist until I clarified and corrected my mistake. For the record, afraid of the dark is avoir peur du noir but if you say avoir peur des noirs (or don’t clearly enunciate between du/des), you’re talking about people. I’m still mortified.

It was time for the exam. She then had me go over to the partitioned area where she asked me to undress. I’d heard from other foreigners in France that the doctor doesn’t leave the room and that you’re not given a gown. True on both counts.

The doctor stayed on the other side of the partition though and let me get undressed alone. No gown was offered and while I was on the exam chair, there was nothing covering me. She proceeded with the exam, all normal stuff and told me that I’d be contacted only if I had irregular test results.

After, she gave me a prescription for a medication I take and another paper for routine blood work at the lab since it’s been a while since I’ve had my cholesterol checked. And that was it!

Easy, painless and I was comfortable the whole time. She wasn’t rushed (French doctors, in my experience, seem to spend a good amount of time with each patient and don’t just pop in for 2 minutes and rush to the next person. Part of the reason why they’re often late) and was happy to answer questions.

So for the short version, here’s how visiting in gynecologist in France is different from the US:

–The doctor will come get you from the waiting room herself, greet you with a handshake and get all your info for the computer. There’s no nurse to do this part.

–There’s also no nurse in the exam room with you. In the US, there’s always a second person to deter lawsuits and act as a witness to the exam. In France, lawsuits aren’t a thing so it’s just you and the doc.

–Fewer personal questions. Maybe this was just my doc’s style or because I’m married but there were no questions about sexual history or anything else one might consider intrusive.

–The French gynecologist doesn’t leave the room while you undress (in my experience). She may go back to her desk or stay there with you. You’re also not usually given a gown or cover.

–The cost is minimal or nonexistent and is the best part of going to the doctor in France.

Everything was over in 15 minutes and the best part was that I didn’t pay a centime! So if you’ve been putting off your gyno appointment in France for fear of the unknown, don’t put it off any longer! The French gynecologist is nothing to worry about.

How has your experience been with doctors abroad?

« Crepes & some spring blooms
Why I do this blogging thing »