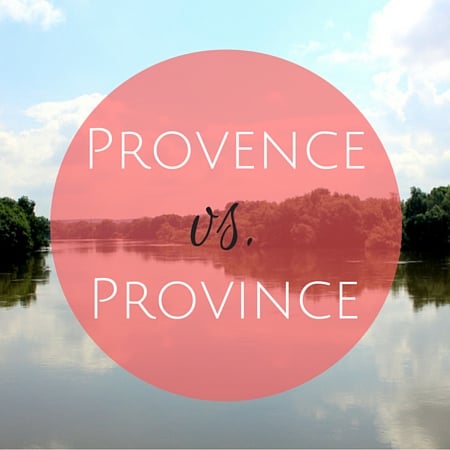 Howdy, and welcome to your quick French lesson of the day. A few years ago, we were at Tom’s parents’ house and his mom said something that sounded like, “Mais on habite en Provence donc ce n’est pas un probleme ici.” (But we live in Provence so it’s not a problem here). I thought to myself, “That’s weird, we don’t live in Provence or anywhere close.” Later when I asked Tom about it, he laughed and said I misheard and his mom had said province. Very different, and no, it’s not another city in France. What does province mean?

Learn the difference between province and Provence!

What does province mean? Province vs. Provence

If you’re not careful and your ears are half-asleep, the two words can sound very similar. But Provence and province are not the same!

A geographic area of southeastern France that encompasses the “modern administrative region of Provence-Alpes-Côte d’Azur, and includes the departments of Var, Bouches-du-Rhône, Alpes-de-Haute-Provence and parts of Alpes-Maritimes and Vaucluse.” (Wiki) The biggest city in the area is Marseille, and the area is known for the beautiful weather, lavender fields and often comes to mind when people talk about the South of France.

What does province mean? Everywhere outside of Paris. If you live in province, it means you’re not in la region Parisienne. You’re out in the “provinces.” So you could be up in a small village in Normandy, in a big city like Nantes in the Loire Atlantique, or down south by Nice. Province is just everywhere else outside of the Paris region — it doesn’t mean out in the boonies — just not in Paris. Anywhere else in France is considered province.

Tom so kindly recorded the following, so hit play on the little button below. Tom says Provence followed by province. The “en” sound is not the same as “in”!

So you could live in Provence, which is considered province.

Have I confused you yet about what does Province mean?

Sometimes province is the butt of jokes for Parisians. To many Parisians, France is Paris and Paris alone and anything else is just not worth the time. That attitude isn’t everywhere but it does exist in some circles. Even as a joke.

If someone says they live in Provence, it means they’re down in the geographical region considered Provence so maybe they mean Marseille. Or Cassis. You know they’re down south, but ask to be sure.

But if you hear province? It just means NOT Paris, so you should ask them where they’re talking about exactly because it could be anywhere (just not in Paris)!

Have you ever confused Provence and province? Can you hear the difference?

Hope you now know the answer to “What does province mean?”

« Reverse culture shock moments I had on my vacation back home in the USA
L’Esprit Francais gift box for all you Paris lovers out there! »