It’s the most wonderful time of the year, as the song goes, and while this year hasn’t been the easiest for any of us, I hope you’ll still be able to spread some Christmas cheer as 2020 winds down. Speaking of Christmas, have you celebrated Christmas in France among the French? If so, you’ve probably noticed some Christmas traditions that are different from the way we do it in the USA. Here are 7 little differences about Christmas in France. 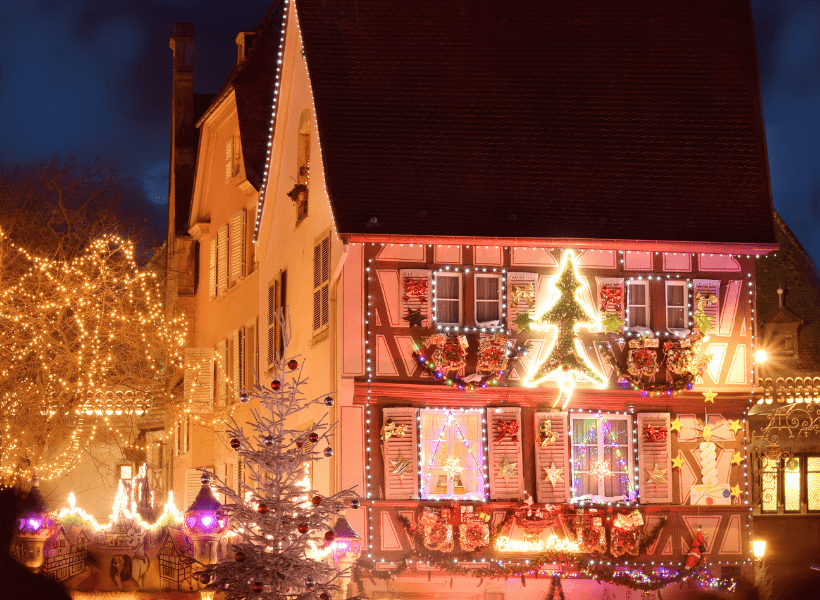 Any celebration is a good celebration and I can’t get enough. Over the years, I’ve loved learning about how Christmas in France is done. I still learn about new traditions, different Christmas shopping habits, foods, and words with each passing year.

Christmas for us is a blend of French and American traditions, and while we do try to visit the USA around the holiday season (usually Thanksgiving), Christmas and New Year’s are usually spent in France with Tom’s family. We all celebrated several years ago in Brittany though when my parents came and that was really nice.

Get your French holiday foods from MyPanier >>

OK, here are 7 Christmas in France vs America differences that you might not know about:

1. Santa Claus is called le Père Noël. Yup, he’s literally called Father Christmas in French and not any variation of the word Santa. But he is the same jolly bearded guy we know and love — just goes by a different name in France. FYI, the word for Christmas in France is Noël. 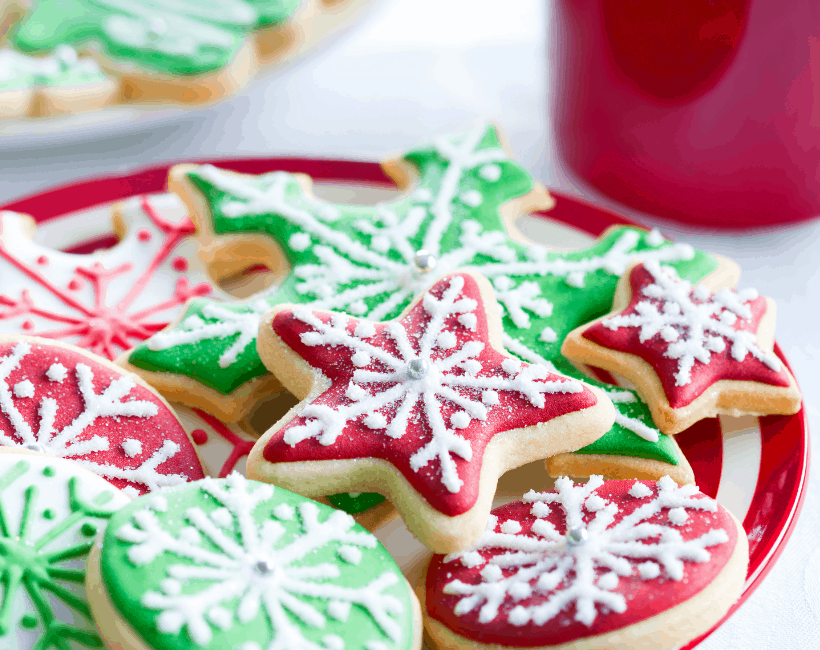 2. Kids leave goodies for le Père Noël in slippers or shoes on Christmas Eve. In the U.S., kids generally leave out a plate of cookies and milk for Santa and have stockings hung above the fireplace. In France, it’s all about the slippers and there’s no cookies and milk left out for Santa.

French kids will leave their shoes by the fireplace in the hopes that the Père Noël will leave them little candies and trinkets. Another difference is when the presents are opened. The presents are usually opened after dinner or after the Christmas Eve mass, not Christmas Day morning like we often do in the U.S. Traditionally in France, the Père Noël comes when everyone is at church and not during the night leading into Christmas Day. This can depend on the family and kids’ ages, though.

Made in France gifts you’ll love (that are on Amazon!) >>

3. The main event is Christmas Eve dinner. The French take mealtime seriously and the Christmas Eve meal is usually long, elaborate, and generally starts later than dinner in the USA. This is also when French kids open presents, as noted above. Festive French foods take center stage and a chapon (capon) or even turkey are popular main course choices.

Many families focus on the seafood on Christmas Eve and opt for a meat dish on Christmas Day. That’s what we’re doing this year at Tom’s parents’ house. FYI, Christmas Eve is called le Réveillon, which comes from the French verb réveiller, to wake up or revive. The meal often finishes with a traditional bûche de noël, or Yule Log, for dessert.

I made a video on my YouTube channel tasting 4 different kinds of bûchettes, so check it out!

4. The French love foie gras, oysters, and smoked salmon on Christmas Eve. It’s all about the food! In the USA, Christmas might be all about the presents or the decor or the parties. In France, the focus is on the food and it’s for good reason. There’s no shortage of delicious salmon, foie gras, and oysters at the supermarket and farmers’ markets.

If you don’t feel like cooking, specialty delis/caterers called traiteurs have nice options as well. P.S. When it comes to soup, don’t make this faux pas like we almost did when my parents and in-laws celebrated together!

For more French food fun, check out my YouTube video where I take you to a French grocery store at Christmastime.

5. The big sales are after the holidays. If you want to get a deal and save some money on your Christmas gifts, don’t expect to find that in France. While some stores might have promos here and there, it’s nowhere near like it is in the USA where a majority of stores have major money-saving sales from Black Friday all the way up to Christmas. France has two major sales periods per year that are mandated by law called les soldes. To shoppers’ dismay, they come after Christmas and New Year’s and run in January. This year, the winter sales kick off on January 20 in mainland France.

6. New Year’s cards are the norm. Unlike the U.S. where it’s common to send out holiday cards to your friends and family in December, the French send out Happy New Year (bonne année) cards after Christmas instead. That’s not to say that you won’t find Christmas cards or that no one does it, but it’s more common among the French to do Happy New Year cards. Common phrasing you’ll see on them is bonne année et meilleurs voeux, which means Happy New Year and best wishes!

7. Hanukkah isn’t big at all. You won’t see menorahs or dreidel decorations at the grocery store in France, nor will you see menorahs in store windows or really any reference to the Jewish holiday at all. It actually surprised me to learn that after Israel and the US, that France has the highest population of Jewish.

In my experience, it’s mostly invisible unless you’re in the Marais area of Paris and other big cities. I am not sure how they measure that stat since the national census doesn’t ask for personal information such as religious affiliation. The Jewish community does celebrate Hanukkah, la Hanoucca, and it exists in France, but it’s not mainstream in terms of knowledge or visibility like it is in many areas of the USA.

Wishing you and your loved ones a very Merry Christmas! 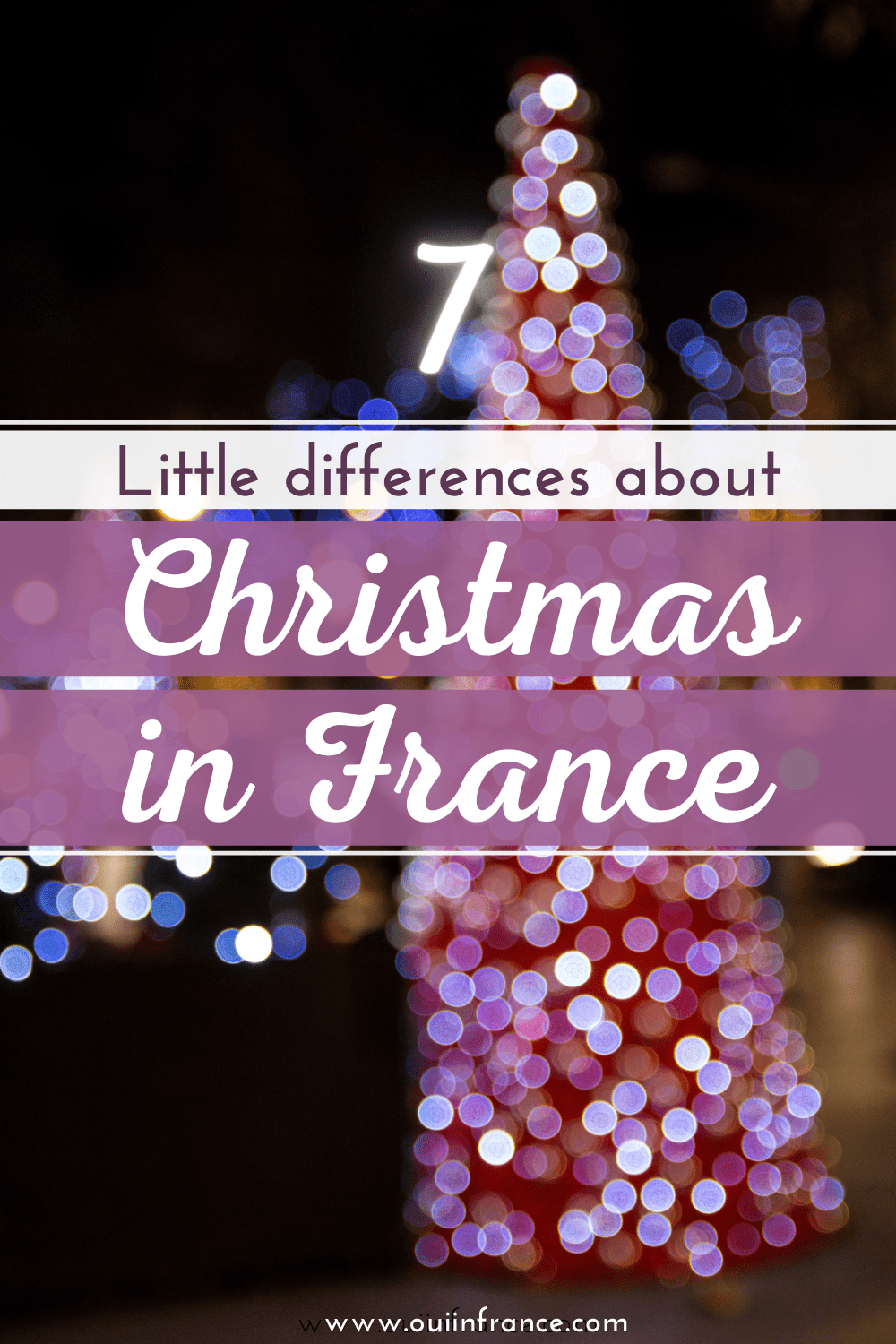 French up your Christmas with a bûche de noel recipe

« MUST-READ Rothy’s flats review: Are they worth the price? Rothy’s discount code
Looking back at 2020, top posts & more »