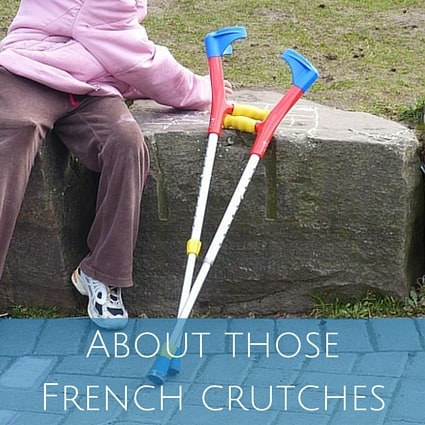 This is one of those “learn from my mistakes” posts.

Looking back, I completely understand why I made the assumption I’m going to tell you about, but I can’t help but laugh now. You see, for my first two years living in France, I had this impression that an enormous amount of people in my area were handicapped after seeing about 10 people per week walking around with forearm crutches.

In the USA, forearm crutches are most commonly used as permanent aids for people with disabilities and not just a temporary aid after an accident. With French crutches, you slip your hand and arm through the brace part that rests on your forearm. I’ve always associated them with people who had a permanent disability. My middle school French teacher had polio and he had these crutches. So did Dr. Kerry Weaver on the TV show ER (for hip displasia). If you have a temporary leg injury in the USA, you’re given underarm crutches that are taller and rest under your armpit. It’s just a different style and I’ve never seen this underarm kind in France.

So here I was after moving to France thinking that there were a ton of people with disabilities in my area. I never thought much of it. This led to a funny misunderstanding between Tom and me about a year later that went something like this…. 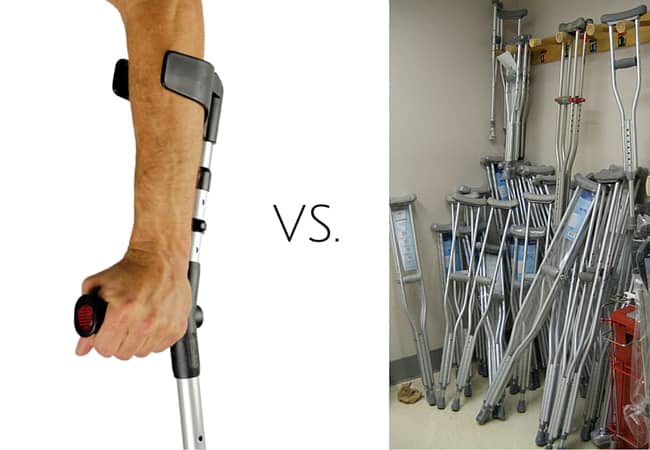 A few years ago, a teenager passed us on the street with a leg brace and winced with every step. He had forearm crutches — French crutches — similar to the ones on the left in the image above. To me, those are typical French crutches whereas the ones at the right are American crutches.

Diane: Yeah, well not that it makes it any better but he’s probably used to it and has a good team of doctors to help manage everything he’s going through. [Me assuming he had a disability or something he’s dealt with for a while]

Tom: Why would he be used to it? You think he hurts his leg a lot?

Diane: No, just that he probably deals with a lot day to day and everything that comes with having a disability.

Tom: Huh? I think he has a busted knee. What are you talking about, a disability?

Diane: What are YOU talking about?

At this point, the misunderstanding over French crutches became clear and I explained to Tom that forearm crutches are most commonly used in the US for people with a disability, a permanent aid and not a temporary aid to use for a few weeks while an injury heals. In the case of an injury, the most common type of American crutches are the taller crutches that rest under the armpit.

He laughed and explained that in France all crutches are forearm style so if you’re a 10-year-old with a broken ankle, you’ll have the same crutches as someone with a disability. Same style. We had a good laugh about the differences between European crutches vs American ones.

So next time you’re in France, if you see someone with forearm crutches, don’t assume a thing! French crutches and American crutches are different!

« Why does France allow us to slow down and appreciate life more?
Ask Tom Tuesdays: Ooh la la in French? Do they say it? »