You’ve officially decided you want to visit France on your next vacation but you’re not sure when you should go. Well, I’m here to help. “What’s the best time to visit France?” is a question I get frequently, so in this post, I’m going to break it down. We’ll go over some questions to ask yourself that’ll help you decide when to book your trip, some pros and cons of each time of year, and I’ll share what I think is the best time to visit Paris and the rest of France. Let’s go!

When is the best time to go to Paris? 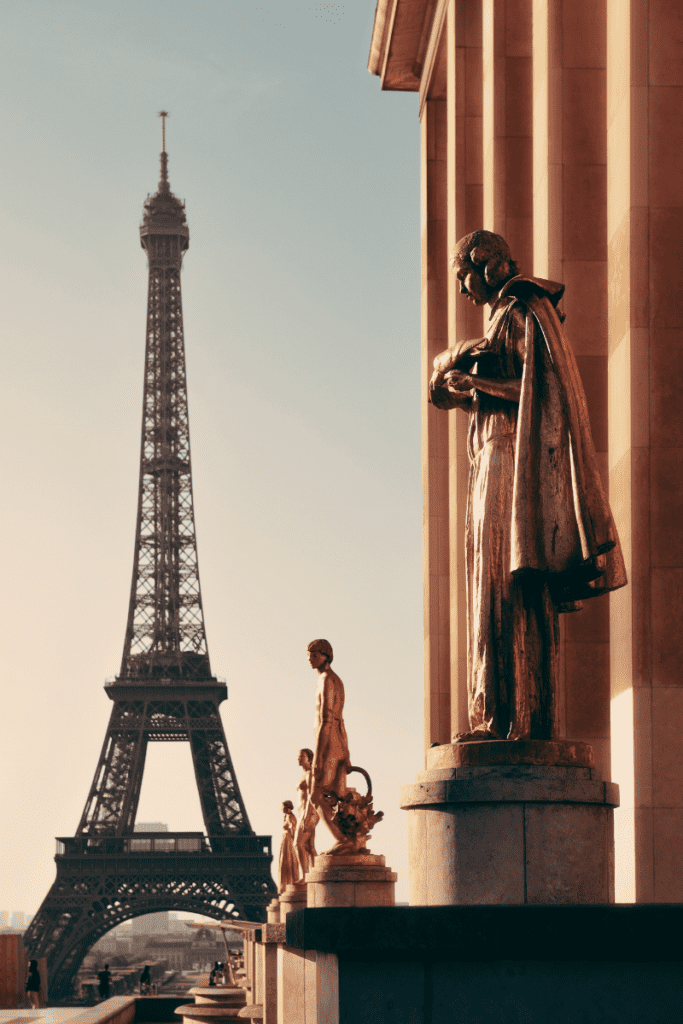 First, I want to start out by saying there’s no “bad” time to visit France. There are positives for every time of year, but I will say there might be a better time to visit depending on where you’re going and what you plan on doing while there.

Now for my first question to ask yourself:

1) Where in France will you be visiting?

This is important to consider both from a climate perspective and from a crowds/activities perspective. France has it all including skiing in the mountains, beautiful coastal hikes, beaches, charming little towns and bustling cities full of culture and history. First, decide what you want to see/do and that will help you narrow down the best time to visit.

Keep in mind that metropolitan France is the third largest country in Europe after Russia and Ukraine, covering an area of 551,500km² (213,000 square miles), which is roughly the same size as Texas. 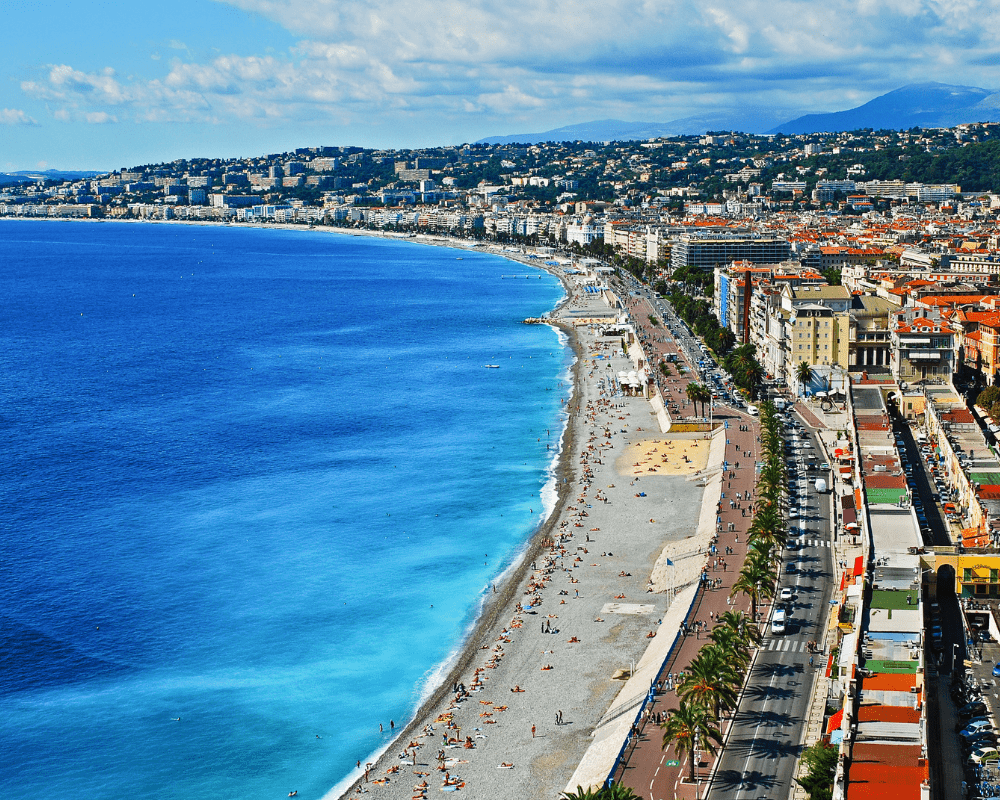 Let’s dig deeper into France’s climate (talking about metropolitan France). France has four distinct seasons and is split into four different climate zones. Keep in mind there are regional variations within each of these.

Many of you will be traveling to Paris and the capital city has a continental climate which tends to be mild. So think cool winters but generally not below freezing for more than a couple of days during a cold front and reasonably hot summers especially during a heat wave. But the average temp, again this is the average, in July is 19.8 °C (67.6) °F.

In January, the average temperature is 4.3 °C (39.7) °F It rains a good amount — higher precipitation than London actually, at 28.3 inches per year (London is 27.2). Keep in mind that crummy dreary days don’t always add up to a lot of rainfall accumulation. NYC has more rainfall than both London and Paris but has fewer rainy days overall.

Remember that air conditioning isn’t quite as commonplace in France as it is in places like the US, generally not found in private homes and everywhere in public. While luxury hotels and other places do have a/c, it’s generally not kept at super cold temps like we find in the US.

A packing tip is to come prepared with layers including a light jacket even in the spring and summer months and a scarf. We visited le Mont St Michel in June and the wind was cold, definitely jacket and scarf weather despite it being June, so have layers on that you can easily take on and off. And a small travel-size umbrella. That’s a must.

If you have an aversion to heat, you may want to avoid the South of France during the summer. If it’s been your dream to ski in France, the winter months are an obvious choice. The season goes from mid-December until April, with February being the peak time and a popular choice for French families to ski since kids are off from school for two weeks. And here’s a fun French vocab lesson for you. You’ll hear ski trips referred to as les vacances aux sports d’hiver.

A few more questions that are important to ask yourself:

2) What kinds of activities do you like to do and are they season dependent?

If you’re looking to visit Paris or another big city and visit museums and the main tourist attractions, maybe the weather isn’t that important to you. Do you want to travel around and visit small villages or spend time at the beach or in the mountains? If weather is important for what you’re looking to see and do, plan accordingly. 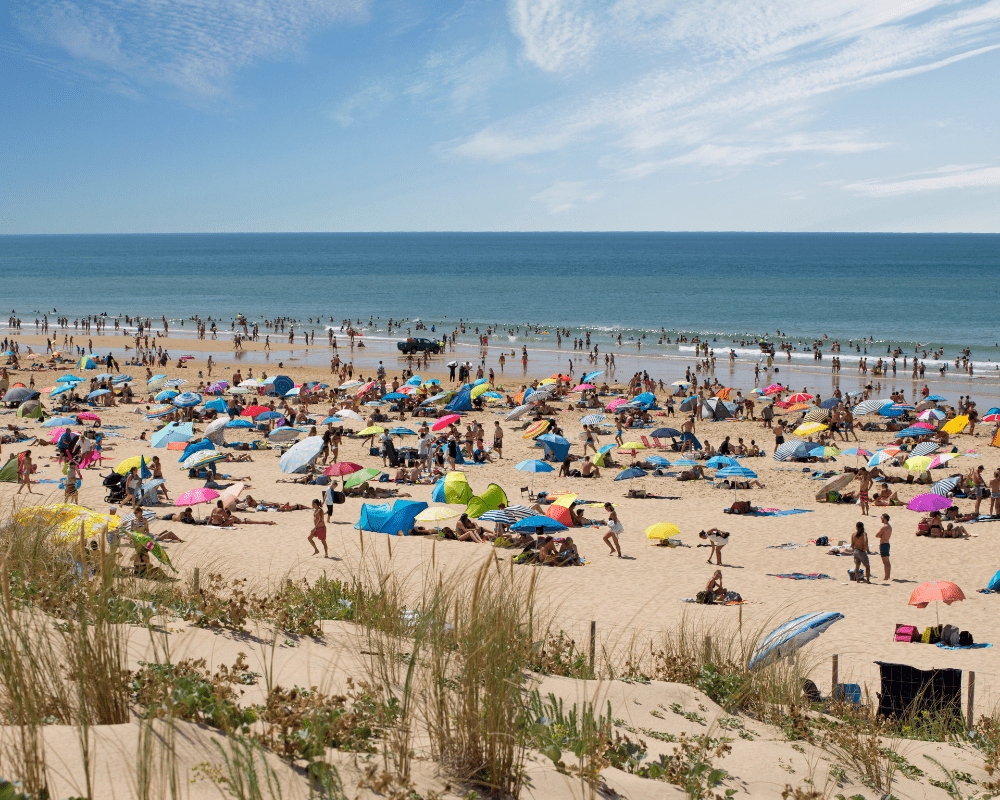 3) Do you hate crowds and long wait times?

If so, avoid July and August at all costs as well as school vacation times. Here’s a chart with all les vacances scolaires dates. July and August are peak vacation times for pretty much everyone, so that means the roads, trains, and tourist attractions are going to be at full capacity. Taking a road trip on a Saturday in July or August can be a very unpleasant experience due to the traffic on major highways.

Here’s a link to bookmark for upcoming traffic delays and this page for traffic reports in real time.

Summer vacation is such a big deal, so much so that the French language has words that refer to people who vacation then. The word is les juilletistes and for those who vacation in August, it’s les aoûtiens. I wrote a post talking about this more here.

Summer travel is often when accommodations are the most expensive. For a deal on your apartment rental, traveling at off-peak times is a way to save money. If you have flexibility in your timing, you can grab a flight that’s less expensive as well.

Pros and cons of each season in France

Winter: Beautiful holiday decor and winter activities, flights tend to be cheaper in the winter months / Can be dreary, rainy and dark.

Summer: Comfortable weather, more daylight, great energy with festivals and events / expensive and crowded with long lines at attractions, some areas get uncomfortably hot and limited a/c. Some businesses in Paris shut down in August because it’s when a lot of Parisians take their own vacation. 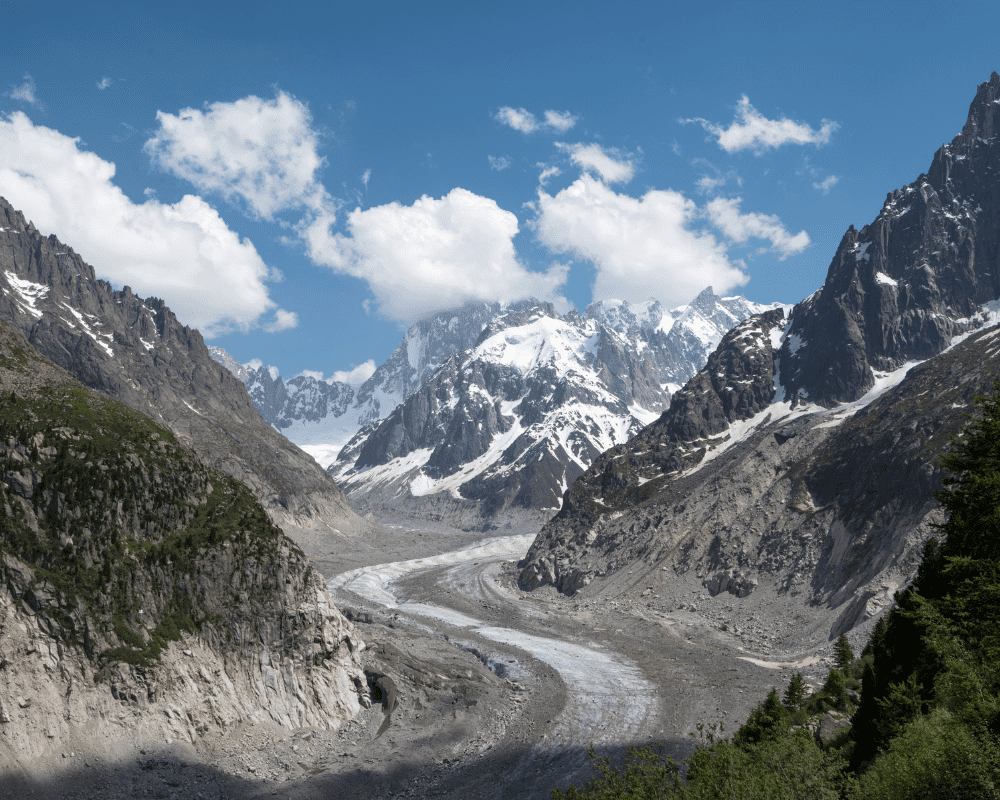 My top pick: When is the best time to visit France?

My disclaimer is that my favorite time of year is around the holidays. I love Christmas, snow, and my birthday is New Year’s Eve. I’ve always been a winter lover. If you want a magical Christmas experience and love winter, go to Alsace, see the Christmas markets. Ski in the Alps or Pyrénées and have that experience.

But Christmas aside, if you’re not specifically looking to come then and aren’t a weirdo like me who loves winter, my recommendation would be to come to France during the shoulder season right before or after the big peak summer season. I’d avoid July or August, especially the biggest peak time from mid-July to mid-August. If you want to visit during the summer, as I said August may be the best out of the two months for Paris because locals are off vacationing elsewhere.

My top choices would be May or even June or not until September.

This is for a few reasons. Kids will be in school so you’ll have fewer families traveling and fewer tourists overall so it’ll be easier to travel around France, get reservations, find accommodations and just have a more relaxed experience. It’s also a way to save a little bit of money. Accommodations tend to be a little cheaper outside of peak times.

Lastly, you’re going to have nice weather. You’ll miss the extremes of winter and summer, depending on where you’re visiting, and it’s just a pleasant time to come. You have really long days from mid-June onward and those who work in tourism aren’t exhausted yet from the busy tourist season.

Now this doesn’t mean you’ll have a bad trip during the summer or any other time of year. But if you have flexibility with your timing, you can’t go wrong in the May/June or September timeframe. But as I said, there’s no bad time to visit France. You might have to pack some additional clothing and be more intentional about where you go, but France is always a good idea.

Now for the question of where to stay. I think hotels absolutely have their place in your travel plans but for stays more than a couple of days, I highly recommend renting an apartment or house so you have your own kitchen and a little more space and privacy. 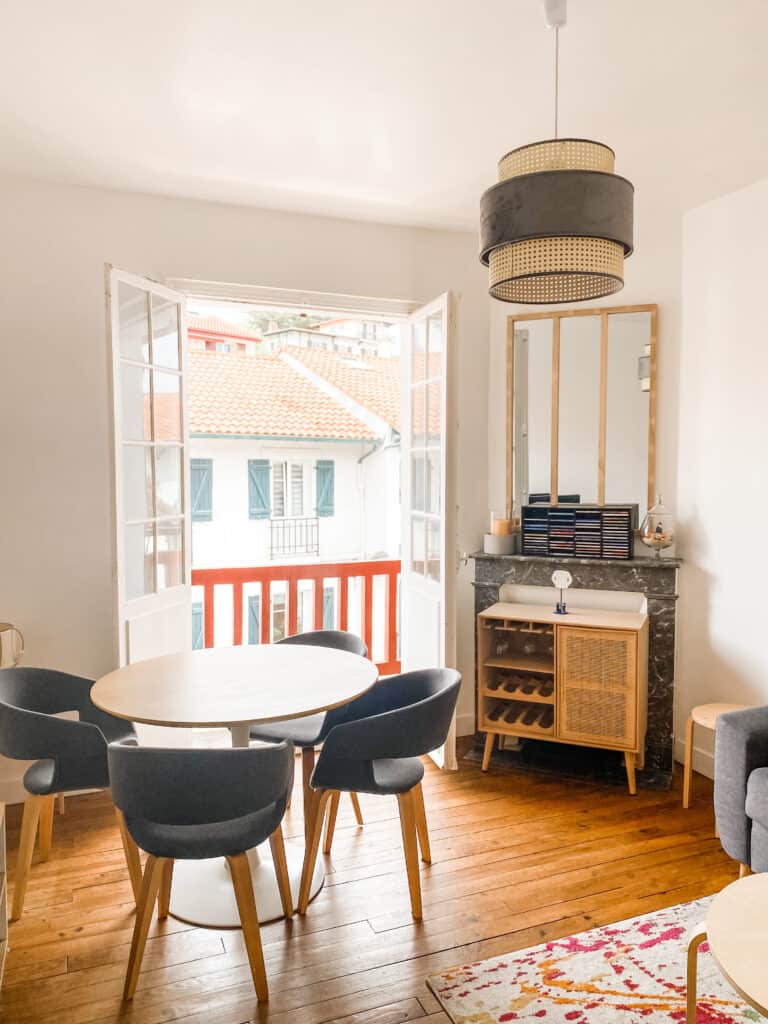 There are a bunch of sites where you can rent a vacation apartment and one I recently discovered is Plum Guide, which I reviewed here. You can think of Plum Guide as a luxury Airbnb alternative with the top 3% of properties across low, mid range and high price points.

They’re all vetted for quality, location, cleanliness and more and they have 24-hour customer service where you can get in touch with an actual human. So check out Plum Guide for your travels to France or places like London, Rome, the US, and all over.

OK, time for me to turn it over to you and ask what time of year you’ve visited France? When is the best time to come to Paris in your opinion? Let me know how your trips have been in each season. If you have upcoming France travel, bon voyage!

Pin my what is the best time to go to Paris post: 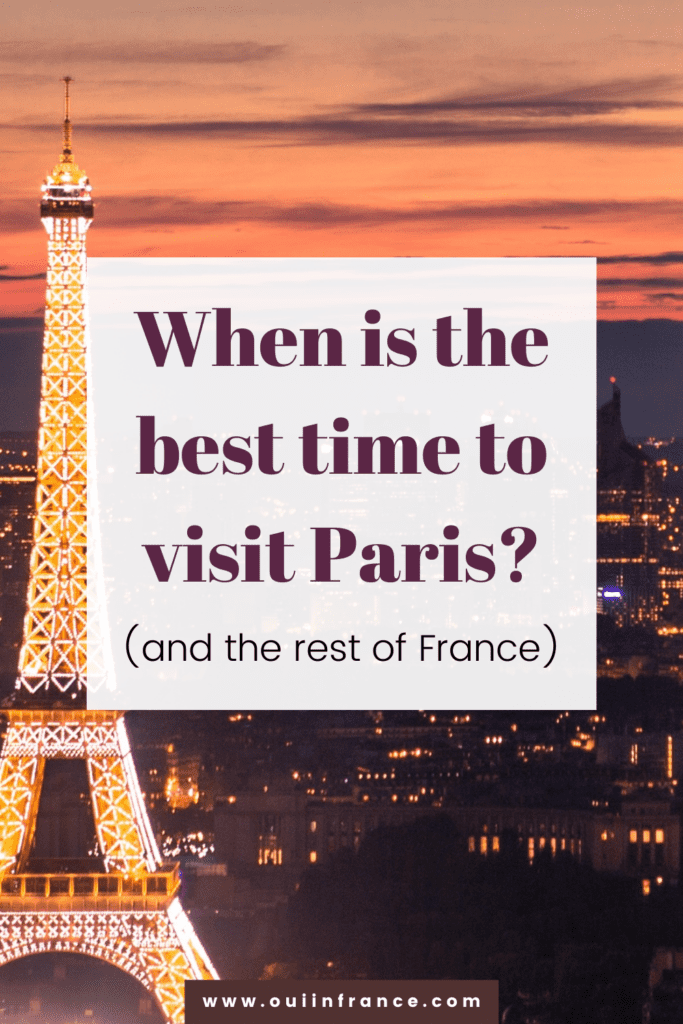