Last week, new restrictions were announced in France which include being locked down to a 10 kilometer (6-mile) radius nationwide for the near future. Restaurants will remain closed and the 7pm curfew will stay in place as well. Last weekend before all of this was put into effect, Tom, Dagny, and I headed to the Atlantic Coast to one of the beach areas closest to where we live. We spent our weekend in Pornic in the Loire-Atlantique. Heading to the beach always makes me feel refreshed and recharged and it was exactly what we needed.

Pornic is home to about 15,000 people but in the warmer months, that number goes through the roof as tourists head to the coast. This past year has been a little different in that regard, but let me start off by saying Pornic and the surrounding area is absolutely worth a trip.

Summers are relatively mild with average highs hitting about 77 F (25 C) but if you’re not into the beach or fishing, there are beautiful shops to visit as well as gastronomic restaurants, spas, and more so it’s really a destination for everyone. 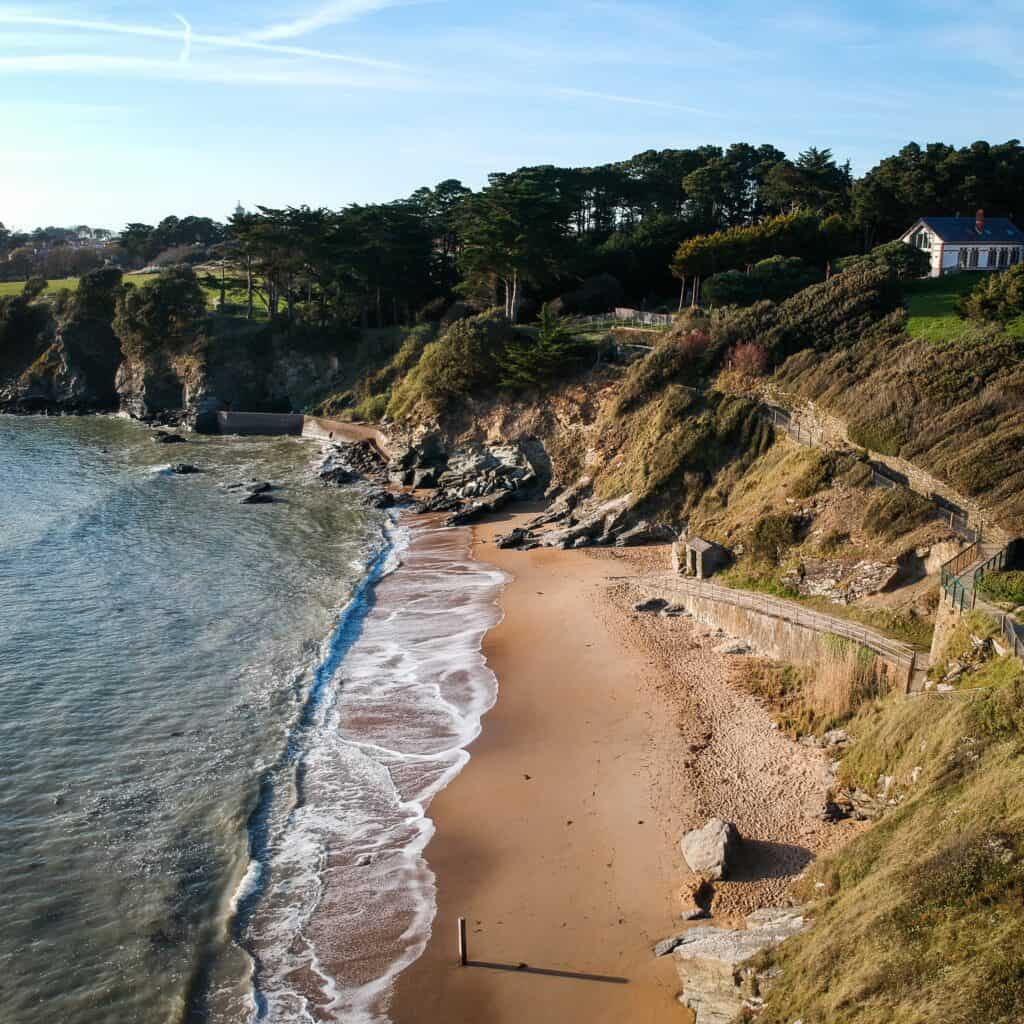 The beach right behind the hotel along the coastal path, as captured by drone

Our favorite thing to do when we head to the coast is to walk along the sentier côtier, the coastal path that run along the Atlantic. It’s all about relaxing and being out in nature. You can leisurely stroll along or turn it into a major hike or run. Dagny was in her glory and smiling the whole time.

If you want to access the beach along the way, there are steps that will take you down to the surf and sand. Rugged and undeveloped until you come into town, the area around Pornic is a nature lover’s dream.

Have a look at my Pornic vlog above for more on what the landscape looks like. You’ll see fishermen as well as people harvesting oysters at low tide. Many of the fishing “houses” you see in my video that extend out into the sea a little bit at high tide are called carrelets and are available to rent for the day.

La Fontaine aux Bretons is just a five-minute drive from the center of Pornic and still central enough but slightly removed from the hustle and bustle of what can become a touristy hotspot in normal times. The property has studios and multi-bedroom apartments with kitchenettes, making it a convenient option if you don’t want to have to eat out all the time, especially for a longer stay. They do have an on-site restaurant, though.

While we didn’t stay at the Hotel Beau Soleil, it’s a great option if you come by train from Nantes because it’s right in the center and is within walking distance of the train station.

Have you visited Pornic?

« 9 Things NOT to pack when moving to France
Moving to another country and having doubts? You’re normal »