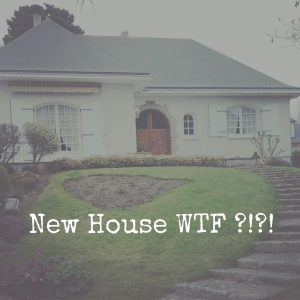 Our house was built in 1951, so of course it’s only normal for it to have character and charm. Like in today’s exhibit we’ll call New House WTF #1…

Read on and see pic!

Since I’m not French and am relatively new in France, I take a lot of things for face value and with a grain of salt. I nod my head and take things in and process them later. No need to get all worked up if something doesn’t fit perfectly into my American framework of what’s normal and what’s not. In the case of buying a house in France, there were many things that I found different, but regardless, everything worked out in the end because WE’RE NOW IN OUR NEW HOUSE!! 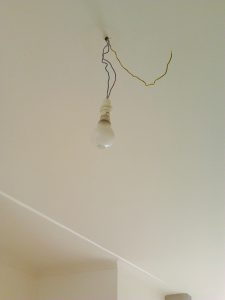 BUT it wouldn’t be France if everything just made sense. Let’s take my light “fixtures,” for instance. Look at this beauty that adorns the ceiling in the family room!

The exposed wires have so much character, right? Red, blue and yellow — yellow being the ground wire (I think) just flapping there in the breeze with no cap on the end. Is that normal?? No, no it’s not, says the American. But the French say that’s totally normal in older homes until you buy light fixtures to cover the exposed wires. In fact, we have nine bulbs like that in our new home all exposed and waiting for a new covering. This naked bulb look strikes me as extremely weird and even dangerous although I’ve been told it’s not (unless you touch it). The French are fans of taking light fixtures with them when they move, I guess. And I’m a fan of having covered light bulbs, so as soon as these get dressed up all pretty, I think I’ll sleep better.

Do these exposed wires strike you as weird? Have you ever bought a house that had things that made you scratch your head?

Note: The electircity was all redone in the home several years ago so the wires (although exposed in some cases!) are not faulty in the wall or anything like that.

Note 2: The first pic above is not a pic of our actual house. Not posting those on my blog — ya know, privacy and all.