If you plop yourself down on a park bench in the U.S. and watch people come and go, you’ll undoubtedly see people of all ages meet and greet each other with a hug. Some are just friendly, quick hugs and others are more loving and romantic. Sometimes a hug is accompanied by a pat on the back, or swaying back and forth, and sometimes there’s a lot of distance between the two people. No matter the type, you will see lots and lots of hugs because it’s a common greeting among Americans. But upon arriving in France, I quickly learned there’s no hugging in France. You don’t hug to say hi. Not even family members.

When I jovially put my arms around my French father-in-law who proceeded to just stand there like an animal playing dead, just waiting for his predator of a daughter-in-law to slink away. Ooops. I found out the hard way there’s no hugging in France. 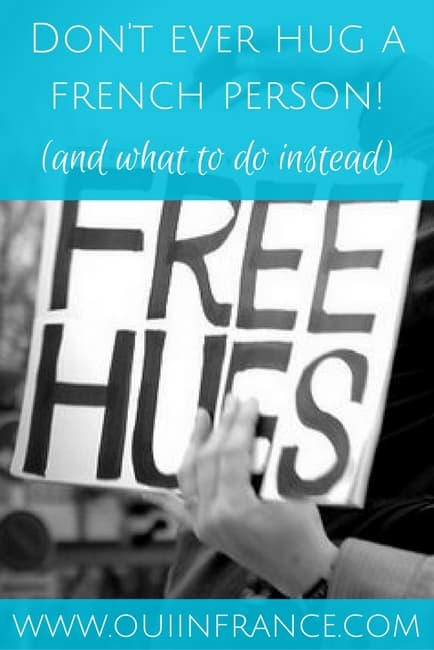 Let’s take a closer look at hugging in France (or the lack thereof) and the French hug. GO! 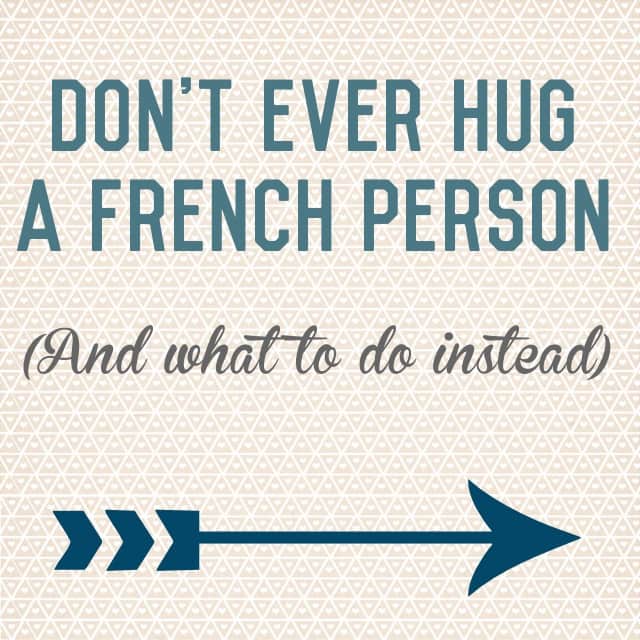 Let me say this right out of the gate. You do not greet French people with a hug (unless it’s a child). There’s no French hug. Instead, you do cheek kisses, les bises. Sometimes it’s one on each cheek and depending on your social circle and region of France, you may go for 3 or 4 bises. But whatever you do, don’t go in for the hug like I did with my poor father-in-law. Hugging in France as a greeting doesn’t exist!

In fact, the French don’t even have a verb that means “to hug.” Well not in the same sense exactly.

How do you say hug in French? Well, the closest would be to simply “take someone in your arms” or prendre dans les bras or faire un câlin but it’s kind of a romantic gesture. Like a tender hug you do with a romantic interest. Or something you do with kids. Or maybe someone going through a really hard time to console them. But hugging in France is never used as a greeting.

The greeting is called “la bise” (pronounced kind of like bees in English” and consists of cheek kisses. 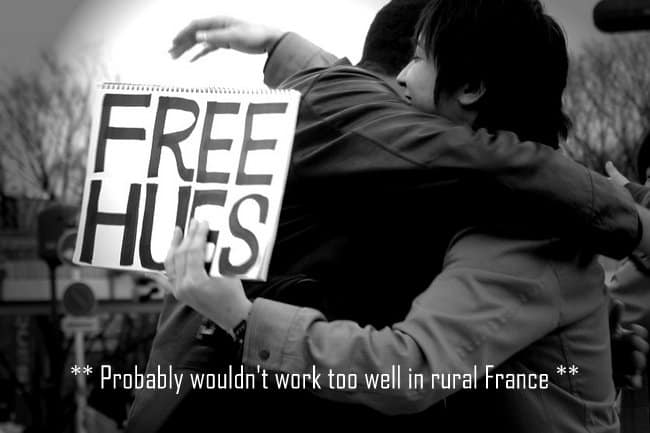 Here’s why you don’t hug a French person (and what to do instead):

They won’t know how to do it. Hugging in France is wayyyy less common.

Apart from what they see in the media, the French really aren’t skilled at the different types of hugging and have no clue when to use each for a greeting — but it’s not their fault! It’s not normal in French culture to hug, so if you attempt to hug a French person, they may get a little too close, too touchy-feely, might not know what to do with their hands or might just stand there like my poor father-in-law waiting for you to move on to the next unsuspecting Frenchie.

French adults don’t hug to say hi. Period. Not with their friends, not with colleagues and definitely not with casual acquaintances. Because they aren’t used to hugging in France, if you go in for a teddy bear hug or even a one-armed, half-assed “hey” kind of hug, they will be perplexed and probably just stand there. They’ll feel embarrassed — trust me. Or maybe they’ll reciprocate to be polite all the while thinking, “Damn this is weird.” Unless you are hugging a pervert. Which leads me to…

If you’ve recently met someone of the opposite sex and you greet them with a friendly hug, this person may think you’re trying to get close fast. As in romantically close. Maybe you are interested in this person or maybe not, but it paints the picture of you wanting to get close to them. Literally and figuratively. Hugging can be an intimate act. You press your body up against someone else’s, depending on the type of hug. This makes people who aren’t used to hugging quite uncomfortable. It’s the same for me when someone leans in for a bise! It’s oddly intimate at times because I’m just not used to doing this with people. I hug! (But I don’t hug in France.) 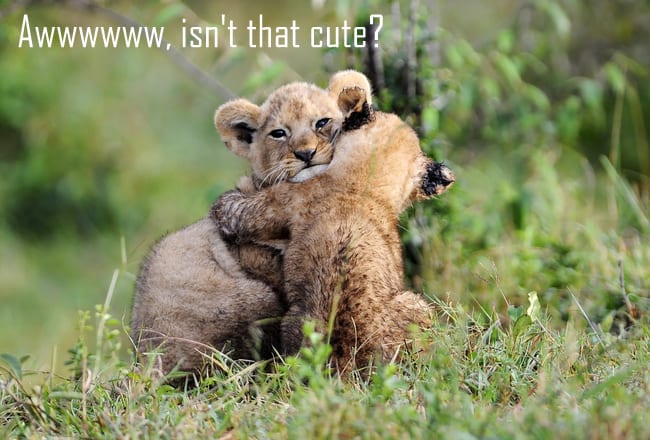 What to do instead of trying to do hug a French person:

You do quick cheek kisses, or faire la bise, instead of hugging in France to greet someone. Who do you do this with? Family, friends, sometimes colleagues and casual acquaintances you see often. Usually men don’t give each other bises unless they’re family or very close.

What side do you start on? Who the heck knows. I don’t think there’s a rule but just about all the time I start with a right cheek to right cheek.

Always follow the French person’s lead. It’s their country and they’re the masters of the French greeting. If they start to turn their head and scrunch their face, they’re coming at you for a bise, or cheek kiss or two. So if they lean in for a cheek kiss, do the same. And if you wear glasses like I do, it’s customary for one of you to remove your glasses so they don’t clink. I never do this because I’m lazy.

If they start to extend their hand instead, do the same and shake their hand to say hello.

Note that once you start to faire la bise with someone, you do it every time you see them. Not just once or now and then when you feel like it. It’s obligatory! More on la bise here.

I still find bisous a little awkward and would much rather hug, but hey there’s no hugging in France so I’ve adapted. And when we visit my family and friends in the U.S., Tom knows they’re going to hug him and he’s cool with it. He’s a professional hugger now.

Here though, aside from Tom’s family and my one French friend (who I cheek kiss sometimes when I’m feeling particularly French), I only faire la bise with two guys at the gym. One is the manager who I’ve become friendly with and the other is a nice guy who is always in the weight room at the same time as me. Aside from those select people, I just say bonjour. It’s not a romantic thing and is as simple as a quick hug. Peck and peck and done.

So bam, there’s your lesson on French culture for the day and all about hugging in French and French hugs. Don’t hug. Faire la bise. And everyone will live happily ever after.

What’s your experience been with hugging in France and bisous? 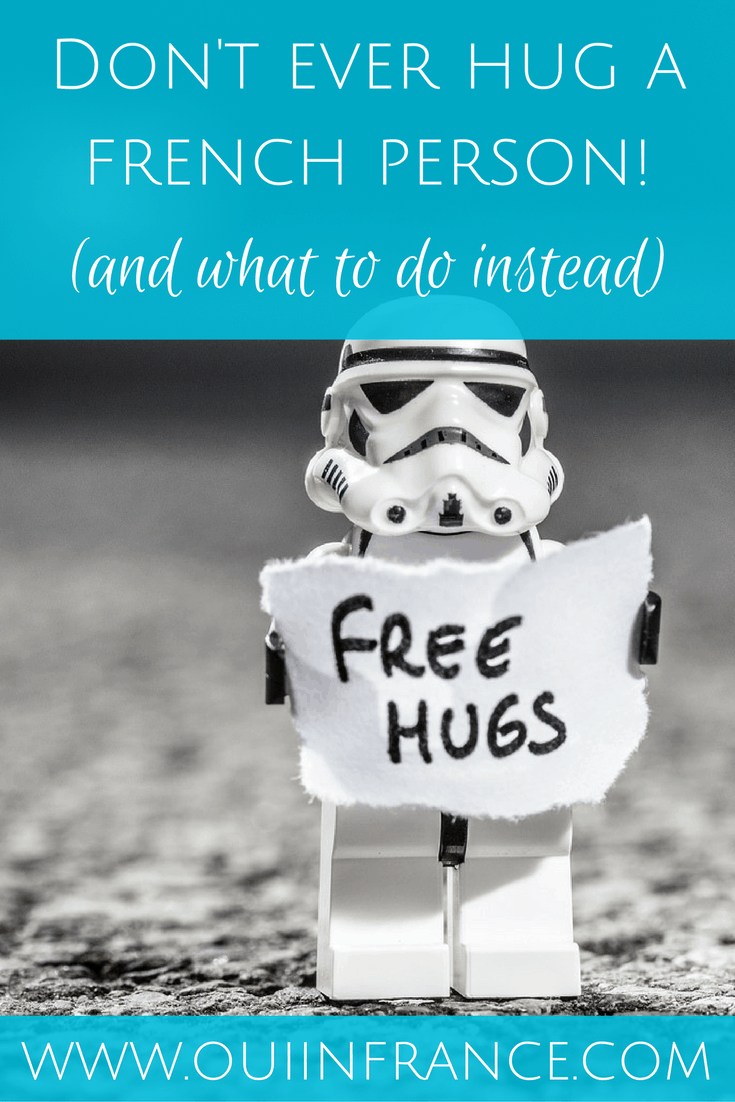 Schooled on my bisous technique