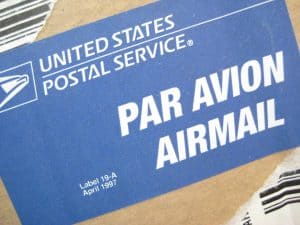 I have a guilty habit of online shopping. I don’t feel guilty about buying stuff online from American websites because the prices are good and the selection is better than what I’d find here. What I do feel guilty about is that my family has to get involved and ship the stuff I buy. After a lot of trial and error, I’ve got the whole sending packages overseas thing down to a science. Now, I don’t go broke over shipping costs and my boxes arrive safe and sound.

Read on to find out how to send packages overseas!

Although I live in France, many of these tips for how to send packages overseas would work for just about anywhere. I’ve sent everything from clothes, food, pet supplies and more and probably receive about three boxes per month either of stuff I’ve bought or my own things that I need from home.

Here are the two main difficulties you could run into when sending packages overseas:

I’m not a USPS expert, so please always check with your local post office, but here are a few tips on how to send packages overseas that have worked for me: 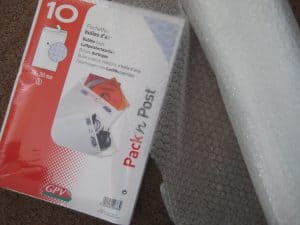 1) First Class NOT Priority: If you don’t need your things ASAP, you should send First Class at the post office instead of Priority if your package is under 4 lbs. Where I’m from in NJ, no one ever mentioned to my family that First Class (cheaper) was an option, so everything went out Priority. And the funny thing is Priority is supposed to be faster but it seems like they both take around the same amount of time. So if you’re sending something that’s under 4 lbs, go First Class to save a few bucks.

3) Go big: If you have a bunch of things to mail, wait to ship them all together in one big, heavy box. Per pound, I’ve found that boxes get cheaper as they get heavier. So for example (making the number up because I don’t know exact figure off the top of my head), a two pound box may cost $20 to ship, again making up the number, but a 20 pound box is more like $90, so per pound, it’s more efficient to ship a big, heavy box instead of 10 little ones.

4) Regarding the contents: If the stuff is new but for personal use, make sure your shipper takes everything out of the plastic bags and removes all tags before sending. Otherwise, if customs opens the box, it could look like you’re importing commercial goods. Also, always mark the contents as a gift.

5) Decorate: So there’s no confusion, put a few stickers on the box or some creative taping so customs can see it’s clearly a personal package.

6) Lie, lie lie: On the customs form, keep the value well under $100 unless you want to chance paying a duty when the box arrives. The lower (within reason), the better! I learned this the hard way when my mom wrote the real value (about $220 total) for a whole bunch of pet supplies and stuff I ordered on sale over Christmas. The box cost $80 to ship in the first place and I paid a duty of 85 euros. Obviously, don’t flat out lie, but if you’re sending yourself an old coat and shoes, don’t put the new value on the customs slip. Also, if you’re sending something somewhat pricey, don’t write the designer name on the customs slip. “Old clothes” is sufficient — no need to write anything overly descriptive that might pique someone’s interest.

7) Tape all seams and anything else that could open: Even if the box seems sturdy, reinforce all seams and edges. It’s even better if you wrap the whole box in brown packing paper to protect it even further. I’ve received some very beat up boxes even though they were 100% sturdy before they left the US.

Knock on wood, I’ve never had a box opened or received a customs notice when I’ve followed the above tips. If you’re looking to send a suitcase, surfboard, skis, etc. overseas, check out Luggage Forward. Their service isn’t cheap, but it’s a great way to get something to its destination without lugging it on a plane.

What are your tips on how to send packages overseas?

SendMyBag review: Cheap way to send your luggage to France