When you visit Paris, you’ll discover right away that Parisians are a special breed. They get a bad rap and are labeled rude, impatient, and arrogant. Is it true? Are Parisians really that bad? How can we act more like a local when visiting Paris? Do we even want to? In comedian Olivier Giraud’s show “How to Become A Parisian in One Hour,” he answers those questions in front of a live audience of people from all over the world. The hilarious one-man show is a must-see if you’re looking to have a good time out on the town and want an insider’s perspective on how to become Parisian. 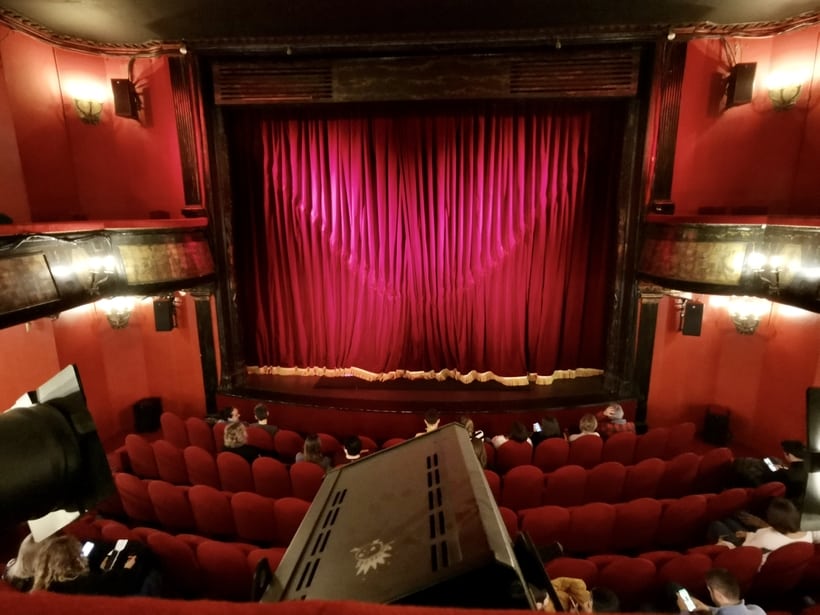 OK, let’s start with the basics. Olivier Giraud is a French comic who originally trained as a chef. He moved to the USA in the early 2000s for several years to work at a prestigious Florida hotel and while there, he began to notice the cultural differences between Americans and the French. His hit comedy show “How to Become A Parisian in One Hour” was born out of that experience and he’s been performing it since 2009.

Dressed all in black and in a charming French accent bien sûr, Olivier teaches the 500-person strong audience his tips and tricks on how to act more Parisian. Over the course of the hour-long show, you’ll see impressions, hear stories, and even see a little bit of dancing as Olivier walks the audience through 8 tips on how to become Parisian. You’ll follow along as Olivier instructs you on how to act Parisian in a store, at a restaurant, on the metro, and more. 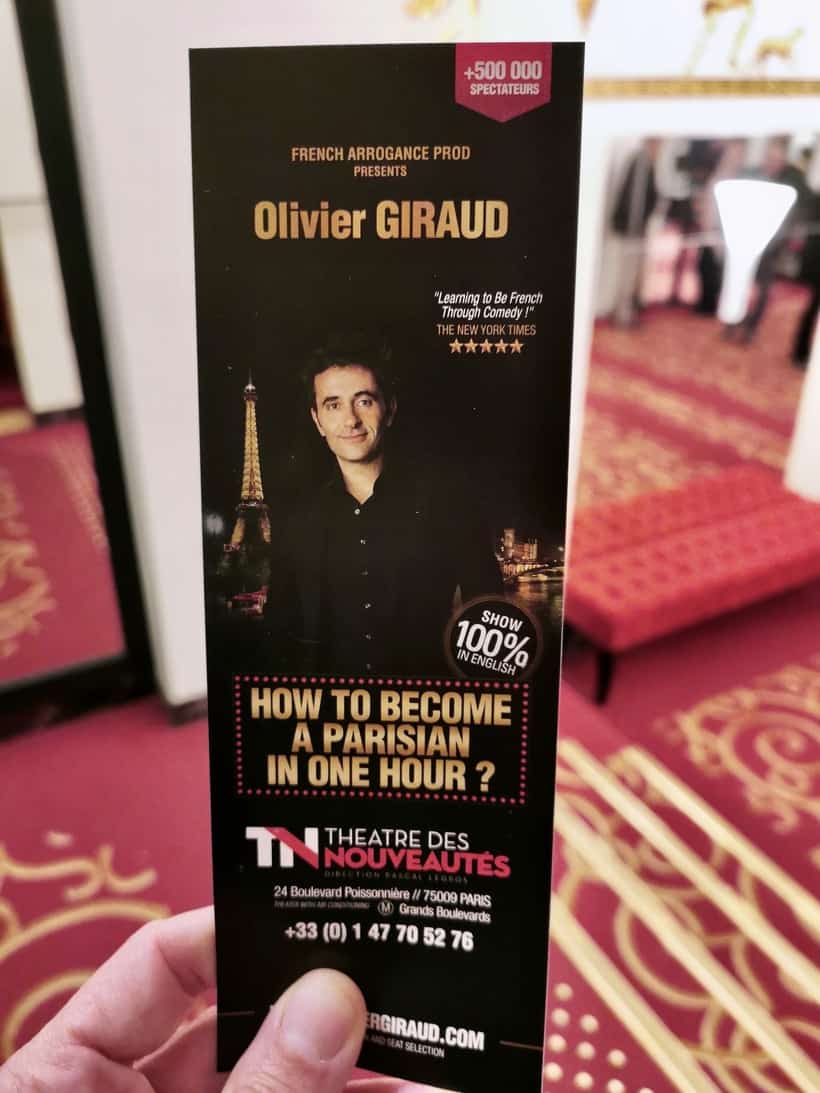 What: “How to Become A Parisian in One Hour” with Olivier Giraud.

A comedy show performed in English.

When: Shows are generally Wednesday through Saturday evenings at 7 p.m. Tickets are available now through the end of May 2020 but Olivier mentioned continuing the show and going on tour, so keep an eye on the website.

Olivier’s facial expressions and impressions are spot on and even the French people in the audience enjoyed themselves. The jokes were hilarious and although he’s poking fun at Parisians and other nationalities, Olivier doesn’t cross over into super-offensive territory. There are some swear words and sexual jokes, though, so the show isn’t recommended for anyone under 16 years of age.

Who is “How to Become a Parisian in One Hour” for?

Tourists and French people alike! The audience was a mix of people from everywhere it seemed — India, Mexico, Nigeria, Bosnia, USA, Australia, Germany, Holland, and that’s just for starters — which is a testament to Olivier’s ability to work an international crowd. No matter where you’re from, you won’t be disappointed. Laughs are universal!

The bottom line is if you’re a Francophile who is curious about Parisians, I’d highly recommend the show. It’s an excellent choice for tourists in Paris who have a little bit of cultural knowledge and want to take it to a hilarious new level.

After the show, Olivier’s book is available for purchase in the lobby, in both French and English, and he is happy to take photos with fans. Here’s proof (his expression with the crazy lips is part of the show): 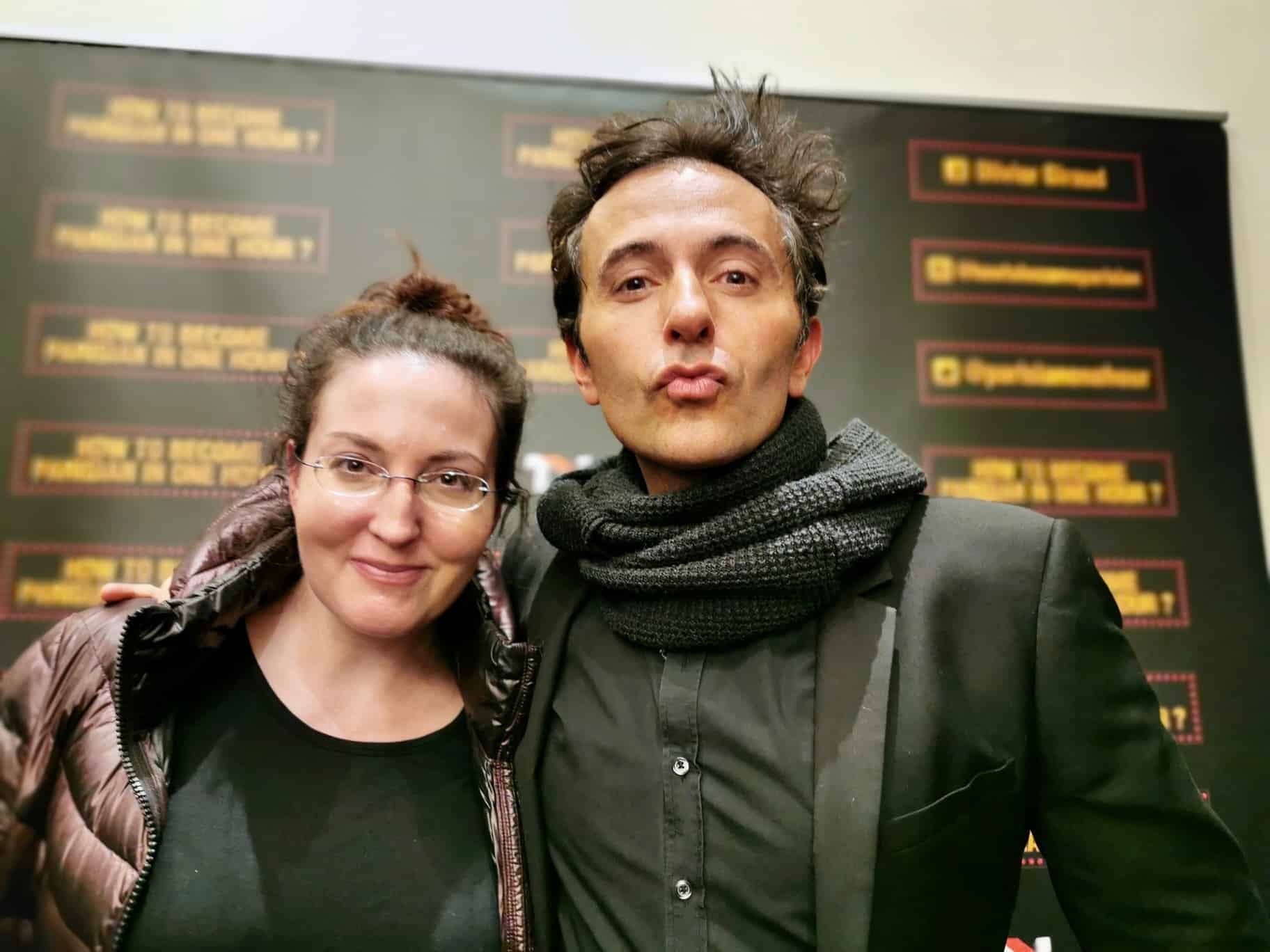 I don’t want to give too much away, but keep in mind the show is in English so you don’t need any knowledge of French to enjoy it. Olivier will teach you some French words along the way and audience interaction is part of the fun, so be ready.

Here’s a short clip of How to Become a Parisian in One Hour from YouTube:

If you find yourself in Paris, you can do what we did. Spend the afternoon shopping at Galeries Lafayette and Printemps on the Grands Boulevards and then walk 15 minutes to the 7 p.m. show. It finishes just in time for dinner.

“How to Become a Parisian in One Hour” tickets can be found on the Theatre in Paris website here.

Have you seen Olivier Giraud’s show?

Thank you to Theatre in Paris for the complimentary tickets.

French gifts for Francophiles to bring out your inner Parisian