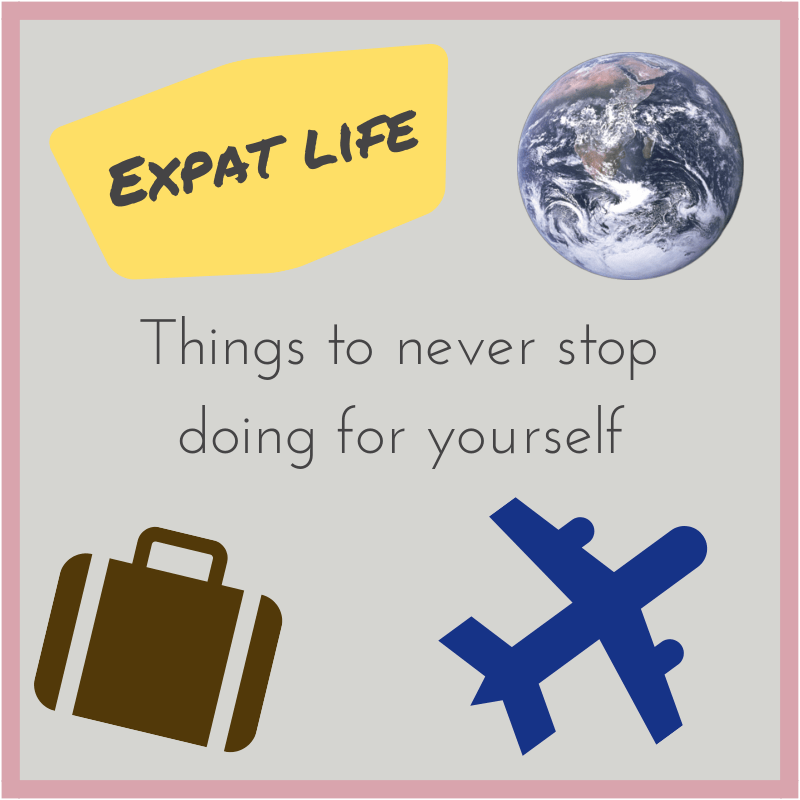 As we get older and take on more responsibilities, maybe have kids or move to a new part of the world, sometimes our own well-being gets put on the back burner in favor of helping out loved ones, advancing our career and sacrificing a little part of ourselves to whatever is most important at the time. Sometimes this is fine and a normal part of life and other times you can burn yourself out.

A thought-provoking post by Marc and Angel Hack Life on things you should never stop doing for yourself really resonated with me and so many of the items on the list ring even more true now that I’m an expat in France. If we don’t take care of ourselves, who will?

Here are a few of the things that spoke to me and how I feel they relate to expat life:

Never stop stretching and improving yourself.

Life is pretty boring if you stop trying to be better. Sometimes our goals are small and sometimes they’re major stretches but the point is that we have actually have goals and want to improve. Maybe for expats, the goal is as small as talking to one new person a day or as big as becoming fluent in a new language. Or something business related. Or family related. Or anything. The important thing is that we don’t just plateau and float through life staying the same.

Never stop listening to your own inner voice.

We all have a sense of intuition and it’ll lead you down the right path just about every time if we take a second to listen. That little fleeting flurry of emotion or “gut” feeling telling you what to do despite what your head says counts for a lot but we often ignore it. In a new place, we encounter new situations and people all the time, so when you’re unsure of yourself and what to do, just take a second and listen to that inner voice.

Never stop working through your fears.

We all have fears no matter where we live in the world. To me, a bunch of these fears hit you at once when you first become an expat and maybe a few new ones surface that you didn’t even know existed. When moving to a new country, many of us have to confront these fears head on because we don’t have a choice — things like embarrassing ourselves in a new language, being social in this new language and even day-to-day things like ordering a few things at the crowded bakery and having to speak up in front of a long line of people. And guess what? Although uncomfortable, these fears I once had are now distant memories that I laugh at. Mixing up un/une quiche is a thing of the past and these initial fears are long gone. Back in the U.S., my fears would have been different but I’d like to hope that I would have still pushed myself to work through them. Because once you’re on the other side, it feels good.

Never stop being a little unrealistic.

As a kid, I loved magic and would even perform little shows with a friend at local nursing homes. I’d watch David Copperfield specials on TV and even got to see him live once at NJPAC. The allure of magic never wore off and although I consider myself a realist and a rational thinker most of the time, there’s a whole lot of value in being unrealistic to a degree. I absolutely thought it was unrealistic of me to quit my job and move to France. But sometimes it’s best to throw all of that out the window and dream a little. Successful people dream big and think beyond what they think is possible. Marc and Angel’s post explains this perfectly, “You have to believe that something totally different than what has happened for an eternity CAN happen starting now. Think about it. Being realistic doesn’t change anything — being unrealistic does.  Doesn’t it seem a bit unrealistic to be able to use a mobile phone to instantly research any topic imaginable, watch movies, get perfect driving directions to anywhere you want to go, and see your friends face-to-face no matter where in the world you are?”

We all make mistakes and this goes double if you’re an expat. Well, maybe I’m the only one who makes a fool out of herself but if we’re being real, we all mess up on some level pretty much daily. As an expat, it’s so important to put yourself out there even if you end up making a lot of mistakes. Like Marc and Angel say, life goes on: “No matter how bad of a mistake you make, there comes a time when you have to stop thinking about it and move on. No regrets in life – just lessons that show you the way forward.” Amen.

Distractions are everywhere we turn and it’s so easy to focus on everything going on except what’s right in front of you. What are we doing this weekend, what are we planning for next month or even for later tonight instead of focusing on what are we doing now. And that leads us to miss a whole lot as we rush around — for what? I think part of the reason why I left New York was because the days went by so fast and it was hard to really be in the moment with everything whizzing around you. France has allowed me to appreciate the now.

Check out the full list here. What can you relate to the most?

On expat life: 5 Things I’m embarrassed (not really) to tell you

Expat depression: Dark side of life in France (and where to turn for help)

« French cultural differences: How to freak out an American
Things you find only in France… Instagram style »