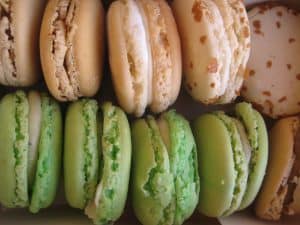 No trip to France is complete without sampling at least a few of one of the most popular sweets around. Not quite a cookie but not a candy either, macarons are about to become your new favorite sweet treat. These trendy little circles have graced the pages of bridal magazines, made cameos in shows like Gossip Girl and have even made their way to New York’s Upper East Side. Flavors like pistachio, rose, caramel, vanilla and a host of others will have you falling in love with France one bite at a time — and I have to say that I’m happy to live in France for maybe that reason alone. After just one taste, I guarantee that these expertly flavored treats will have you coming back for more.

What exactly are French macarons? Read on!

French macarons near me are heaven in a bite 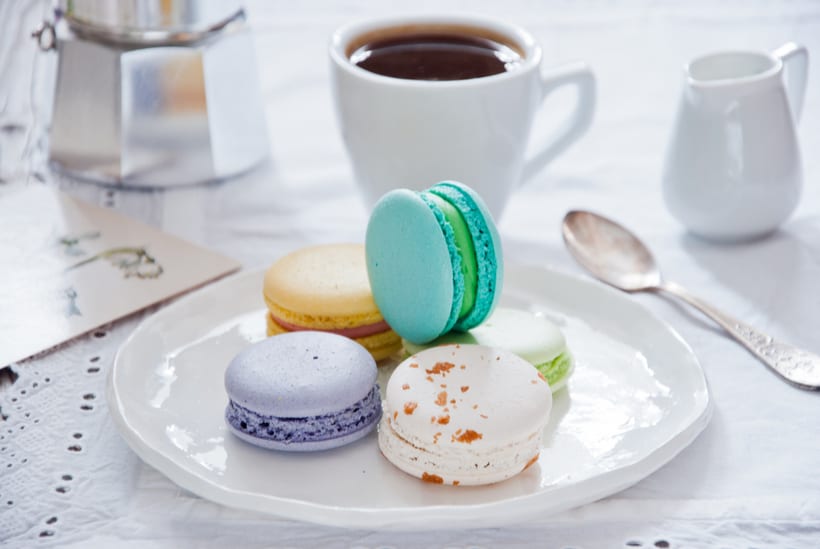 French macarons are a meringue-based sweet made with egg whites, sugar, almond powder and several other ingredients. Macaron flavors are diverse and range from fruity to sweet and even flavors like rose and mint. Two circular halves sandwich a yummy filling that’s usually jam, ganache or a light buttercream. The macaron filling can even be a salted caramel type flavor for the caramel ones. Some are bright; others macaron colors are subdued and more of a pastel shade. It’s entirely up to the person making them.

Are you salivating yet? Many bakeries in our area sell French macarons, but it’s not every day that we buy a box. They’re for special occasions only.

In France, almost every pastry shop has their version of the macaron, but where did these yummy treats come from? According to MadMacNYC, the macaron originally came from Italy and was introduced by the chef of Catherine de Medicis in 1533 around the time she was married to the Duc d’Orleans who became king of France in 1547 as Henry II. It’s said that “the term ‘macaron’ has the same origin as the word ‘macaroni’ — both mean ‘fine dough.'” But it wasn’t until the beginning of the 20th century that the macaron became a sandwich-like sweet. Pierre Desfontaines, the grandson of Louis Ernest Laduree, came up with the idea to make a cookie sandwich with a sweet filling between the two halves. 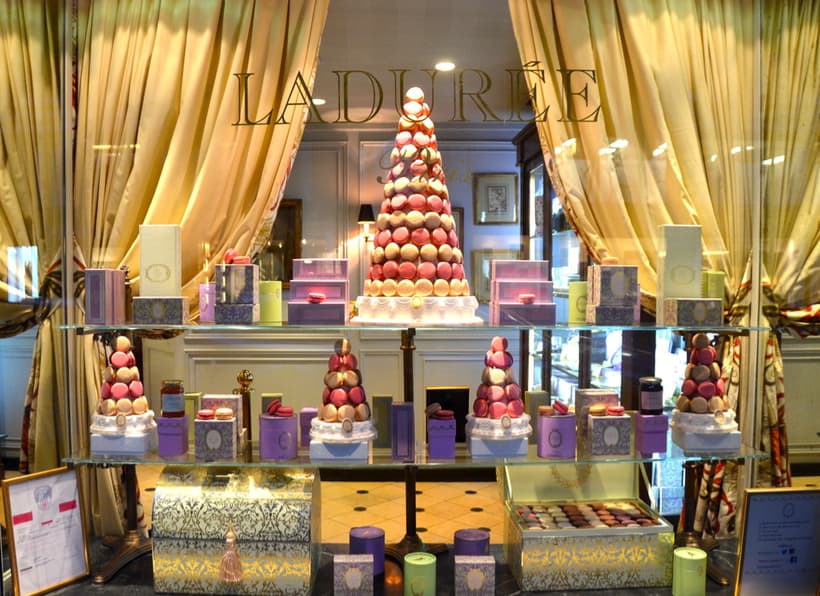 Over the holidays, I was in New York at the French Consulate getting my visa and just had to make a pit stop at Laduree on the Upper East Side. Laduree is THE place to get macarons in Paris (and the Dublin airport) and the trendy little treats are making a killing in New York. While the actual shop sported the same decor as the Parisian ones, the actual macarons seemed different. They weren’t bad at all, but they just seemed a little heavier. Maybe it’s because they sustained a transatlantic flight (flown in from Paris several times a week I hear), but the more obvious difference was the taste. They weren’t as dainty and light as the French macarons. But maybe that was just in my head.

What else is cool about Laduree? The little box and bag! The macarons come in a gorgeous little box and the cute pastel green bag will make you feel like the coolest kid in school if you bring your lunch in it.

Does anyone else share my opinion about Laduree New York? The price was pretty much the same. At over $2/macaron, be prepared to pay if you’re feeling hungry. You can even buy French macarons online. 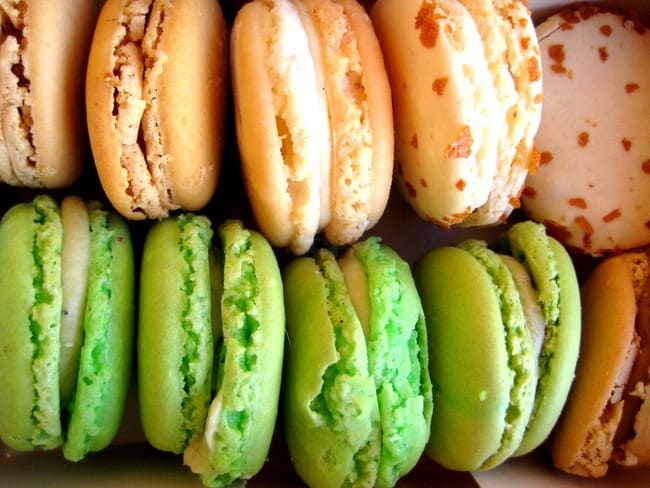 These days, there’s no shortage of French macarons near me that come in delicious flavors and all colors of the rainbow. From traditional vanilla, pistachio and coffee to more inventive seasonal flavors, French macarons are sweet treats that are here to stay. What are your favorite French macaron flavors? Do you go with the most common flavors or do you opt for more interesting combos?

This week, we’re on vacation in the Brittany region of France and had the pleasure of stumbling upon some great little macaron shops whose wares were good enough to eat… and we did. I took this pic yesterday at the very distinguished Pierre Le Petitcorps in Dinard, France. As I said, even on vacation, there’s an abundance of authentic French macarons near me: 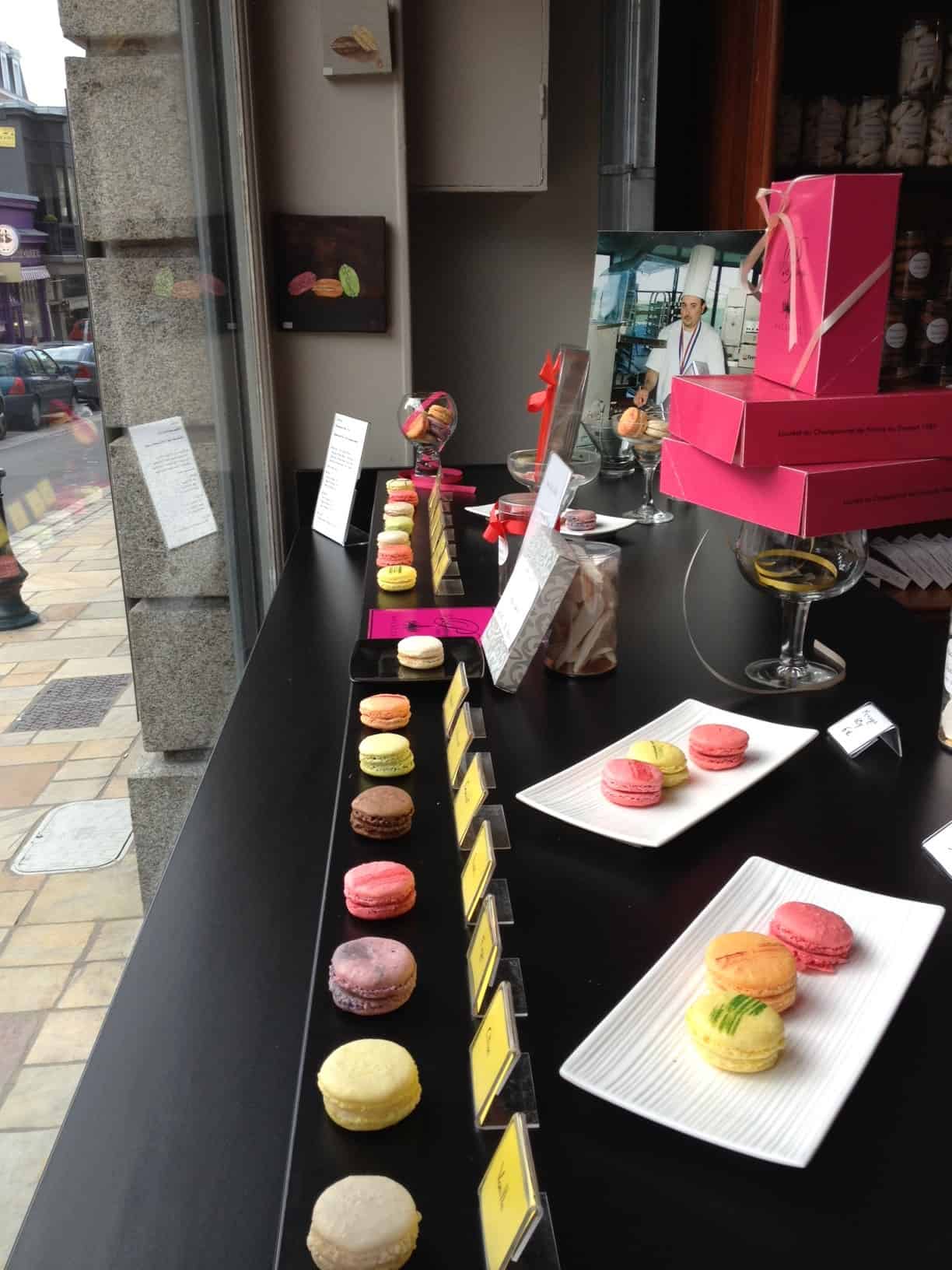 French macarons near me isn’t a problem, but if you don’t have any French macarons nearby, you can make your own pretty easily. Ready to whip up some French macarons? If you’re more of a DIY type, try your hand at making your own. According to Amazon reviews, this book entitled Macarons: Authentic French Cookie Recipes from the Macaron Cafe

is a great place to start. Great to try on a day you’re feeling ambitious! Let me know how they turn out!

What are your favorite French macaron flavors? Where do you usually buy them?