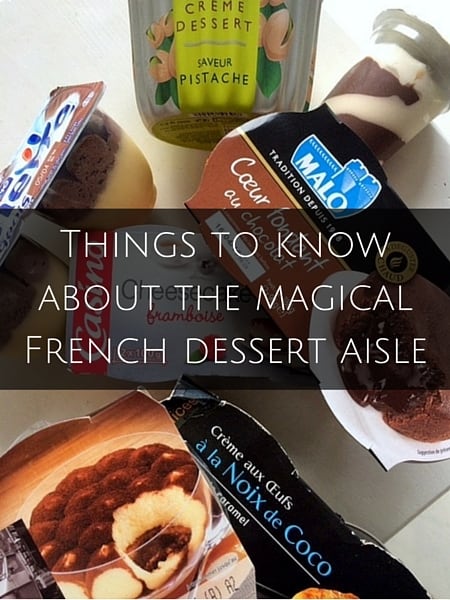 Oh heck yes! This post is all about the yogurt aisle‘s cousin — the little dessert section of the supermarket! Nope, I’m not talking about the bakery section of the supermarket where you find pastries and other store-made desserts. I’m talking about the refrigerated single-serve dessert cup section. No joke, one of my favorite parts of grocery shopping in France (or maybe favorite part about living in France in general?) is browsing the mini dessert aisle. At any given time, our fridge has at least three different types of desserts that will complement any meal. It’s Tom’s fault! My husband has a major sweet tooth and I love that about him. 😉 Over the years, I’ve become a major fan of these pre-packaged French desserts and you’re about to see why.

So what can you find? GO!

Things to know about the magical French dessert aisle 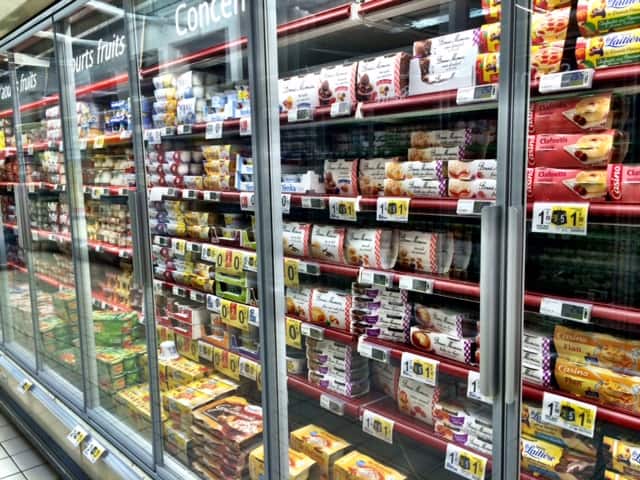 Quick note: In all honesty, no, I didn’t buy extra desserts to photograph for the purpose of this post. This just happens to be the normal selection in my fridge. I swear it’s my husband’s fault!

4 Things to know about the French dessert aisle:

The selection is out of this world!

The variety of little single-serve French desserts in the refrigerated aisle — yes, an entire aisle — next to the yogurts is super impressive. From puddings and mousses to little crème brûlées, tiramisus, baba rhums, cheesecakes and more, you’ll find something — or several somethings — that you can’t resist. I don’t think anything in the USA rivals the mini dessert selection in France. In the United States, you’ll find little JELL-O cups and puddings and maybe a few others at specialty markets but nothing like this! 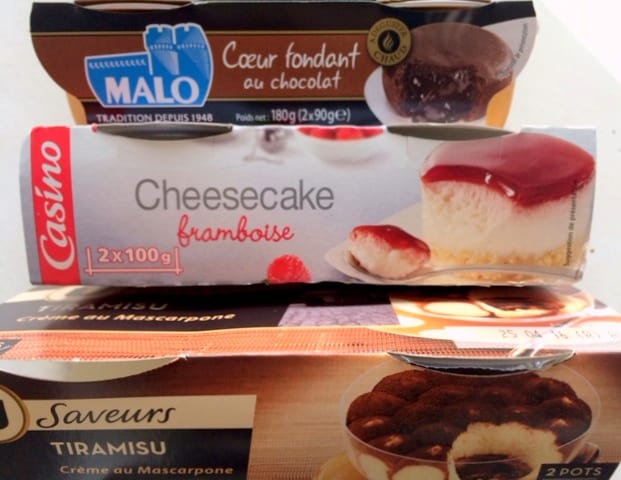 The store brands are just as good

Back in the USA, I rarely bought the store brand. In France? I regularly grab Casino brand raspberry cheesecake (discovered this last month and it’s delicious) or the Super U Tiramisu (a staple around here). The quality is just as good as the more expensive brands, so don’t be afraid of trying a little bit of everything, no matter the brand or packaging.

All about French yogurt culture >>

The desserts are just big enough to satisfy

Most of the little desserts won’t kill your diet because the portions aren’t huge. You can indulge here and there without feeling terrible after because the desserts average about 200 calories — not 1000 like a Cheesecake Factory slice of cheesecake that leaves you stuffed and regretting your dessert choice. Sure there are some higher calorie options in the French dessert aisle but the little mousses or puddings won’t leave you feeling guilty. You’ll be satiated and ready for your nap!

You’ll find something you never knew you liked

I’d never had a coconut cream dessert until I moved to France, and if you’d asked me years ago if I liked coconut desserts, I probably would have said not really. Coconut isn’t my favorite. But when it’s in a coconut dessert cup? I changed my mind and actually love quite of a few of the coconut-flavored desserts here — and that’s a good thing because it’s one of Tom’s favorite flavors. With a selection like you find in France, it pays to try pretty much everything at least once and your likes/dislikes may surprise you!