“Ohhh, wowwwww! Look at thatttt!” came out of my mouth no fewer than 10 times per day on our recent trip to the Charente-Maritime department of France. Our long weekend kicked off in La Rochelle, a coastal city about 470 km from Paris whose history is just as impressive as its modern-day approach to life. Read on for things to do in La Rochelle and more! 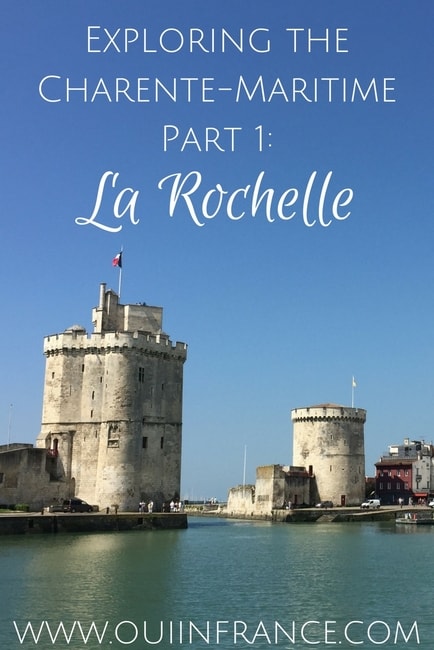 Things to do in La Rochelle in the Charente-Maritime

This is Part 1 of a series where I’ll be telling you more about our trip to the Charente-Maritime. Stay tuned for more on the Ile de Ré, the Marais poitevin, Rochefort, and more! 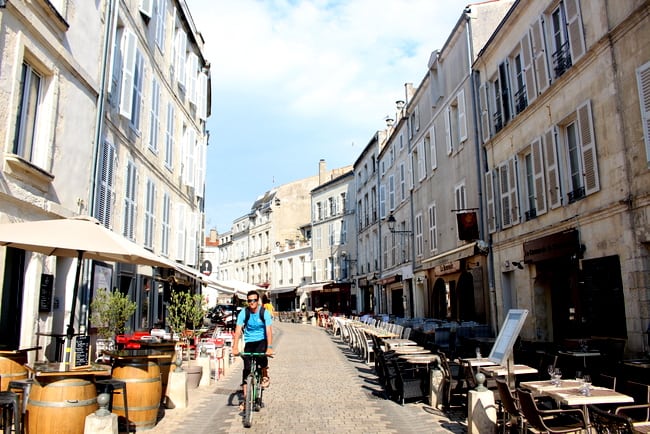 One of the things I love most about where I live is how well situated I am for travel within France. The Maine-et-Loire has a lot going for it in its own right and is a destination worthy of your time for sure, but when you’re looking to travel to other regions, it doesn’t get better than this. I’m not far from Brittany, just an easy train ride to Paris, a 45-minute drive to Nantes Airport, and about a 1-1/2-hour drive to the Atlantic Coast.

The Atlantic Coast is the best part of the Charente-Maritime department and its biggest draw is La Rochelle. The lively town was our home base for travel within the department, and if you’ve never been to La Rochelle, it’s an incredibly diverse city that’s home to about 80,000 people and located on the Bay of Biscay. The city is home to 4 harbors and Le Port de Plaisance des Minimes is the largest port for recreational boats on the entire French Atlantic Coast!

Those who live in La Rochelle are said to appreciate the coastal town’s “uniquely gentle lifestyle,” and after spending a couple of days there, I could see why. With a rich history dating back to the year 1000, La Rochelle mixes old and new while focusing on sustainable living. 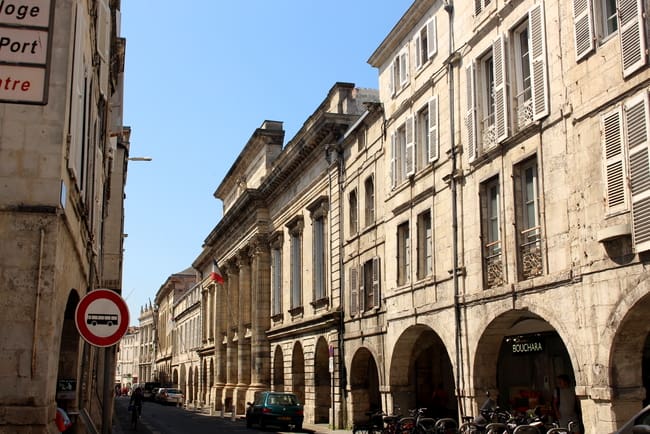 What to do in La Rochelle

Upon arriving in La Rochelle, you’ll immediately notice the historical architecture including the light-colored stone archways, which are called arcades in French. Originally designed to protect goods from inclement weather in La Rochelle’s trading heyday, the archways now are one of the town’s most charming features. One of the best ways to enjoy les arcades on a sunny day is to spend the afternoon shopping under the protection of the shady arches. 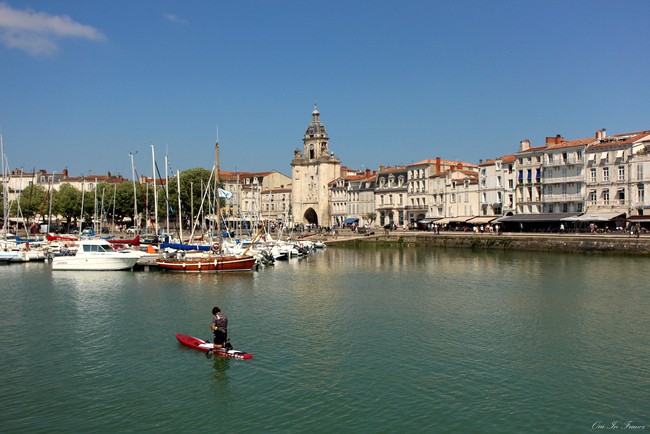 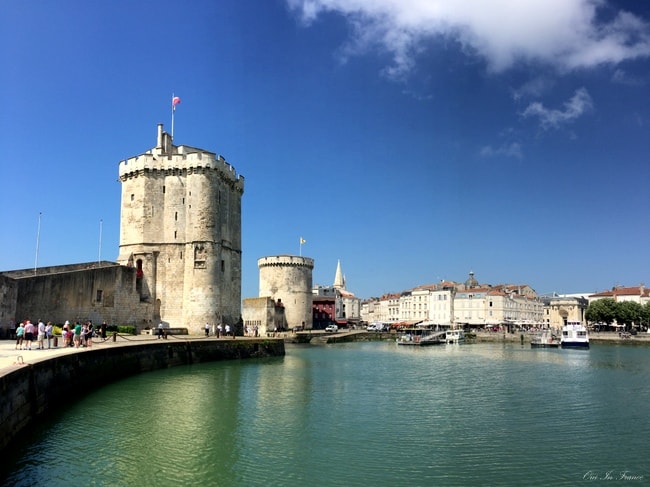 Another must-see stop on your visit to La Rochelle is the fortified Old Port, or Le Vieux Port. It’s been in its current location since the 13th century and is set off by two stone towers that command your attention. Tour de Saint-Nicolas is the taller of the two and Tour de la Chaine is the other. The town was destroyed in the Grand Siege from 1627-28 but the two towers survived.

Shop, eat, drink, and be merry while taking in the sights — maybe with an ice cream cone from Ernest le glacier (Tom recommends the canelé flavor).

You can also head to the beach if you’d rather relax in the sun. The Concurrence Beach is in easy walking distance from the center and offers 150 meters of sand along a picturesque promenade. 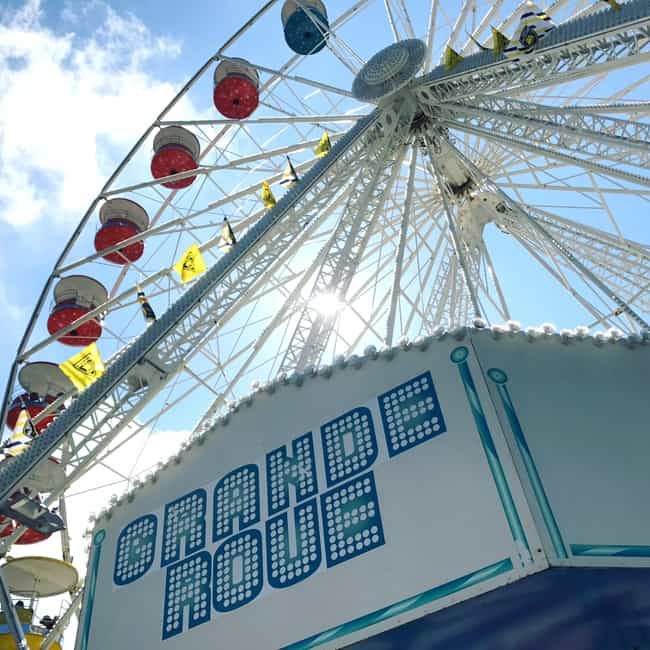 To get a view of Le Vieux Port from above and snap a few photos, hop on La Grande Roue like we did. It’s 5 euros/person. 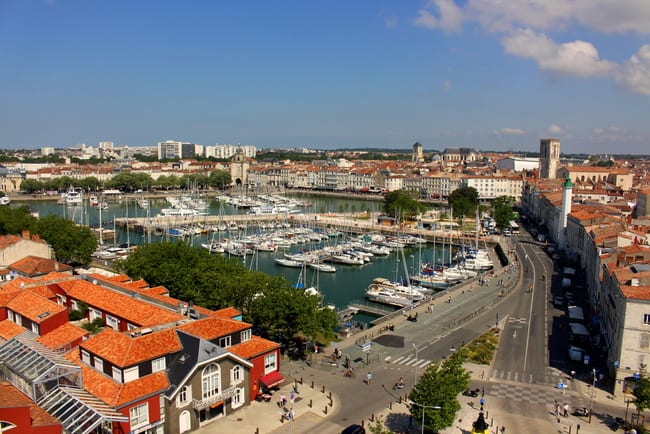 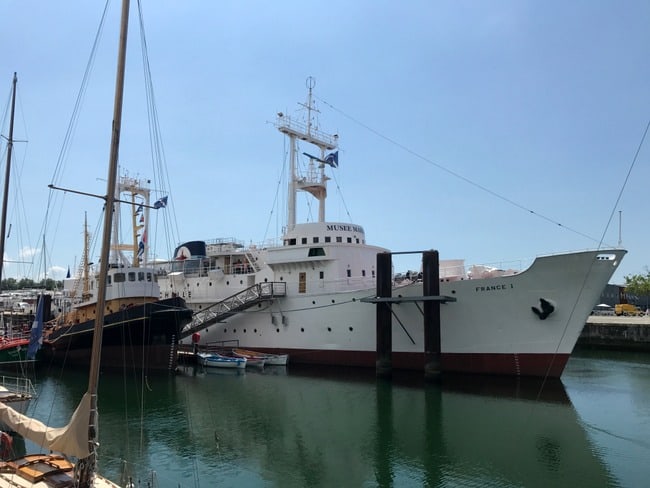 If your French is up to speed and you’re interested in maritime history and curious about what a seaman’s life was like, spend a couple of hours at the Maritime Museum.

There are several ships and exhibits you can view, but our favorite part was boarding the France 1, a retired meteorological ship. Constructed in 1958 and 76 meters in length, the France 1 frigate gives you a firsthand look at how seaman, meteorologists, and scientists lived, and you can visit all parts of the ship including the engine room, kitchen, and cabins. You can also board 2 trawlers and a tug while at the museum. 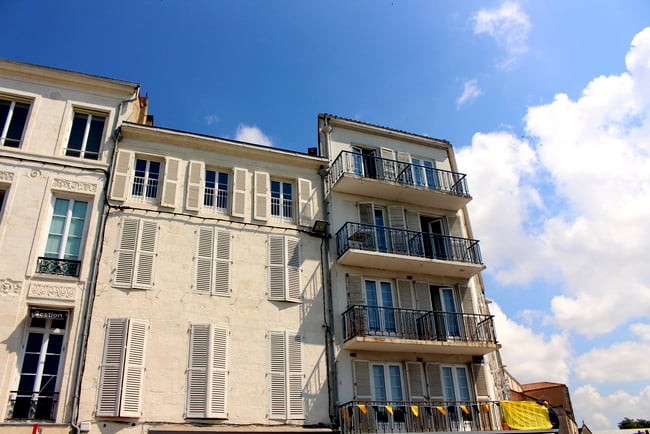 The options above are just a small slice of what La Rochelle offers tourists. There’s also The Bunker, an intact 300 square meter bunker where you can learn the history of the city from 1929 until its liberation on May 8th, 1945. Let’s also not forget the La Rochelle Aquarium, one of Europe’s largest, and the Museum of Natural History with over 2,500 square meters of exhibition space. We didn’t get to any of these sights this visit, but there’s always a next time…

Energetic, friendly, bustling, and family oriented would be the words that first come to mind. Like many French towns, people take their time and seem to enjoy life’s little pleasures. It’s super welcoming to tourists, and in recent years, it’s become even more accessible with the construction of La Rochelle Airport. Many low-cost carriers have direct flights from various hubs in the UK and other parts of France.

Where to stay in La Rochelle

There are a variety of lodging options including Airbnb, but we chose to stay at the centrally located Hotel Saint-Nicolas. The 3-star hotel is a stone’s throw from Le Vieux Port and is affordable at under 100 euros/night. They have on-site parking, which is much appreciated since the narrow streets get very crowded, and free Wi-Fi.

Where to eat in La Rochelle 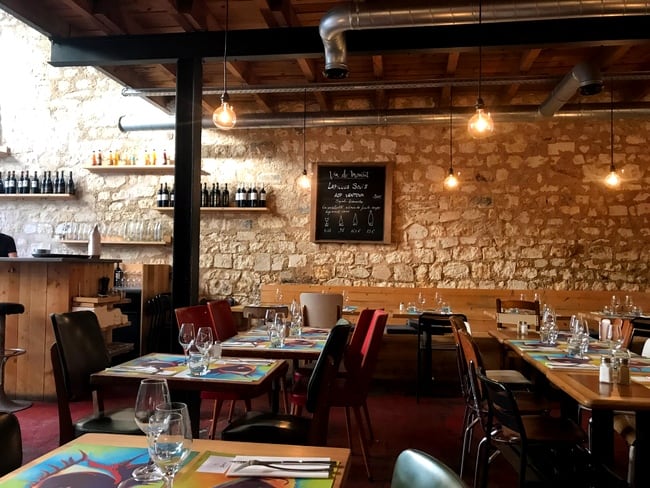 Our feet were dead after being on the go all day, so we dined at Prao Restaurant, just a 2-minute walk from our hotel. All of their food is cooked fresh with seasonal, local ingredients. The restaurant doesn’t even have a microwave or freezer (except for the ice cream) and they were happy to accommodate my food allergy. Generous portions and reasonably priced. 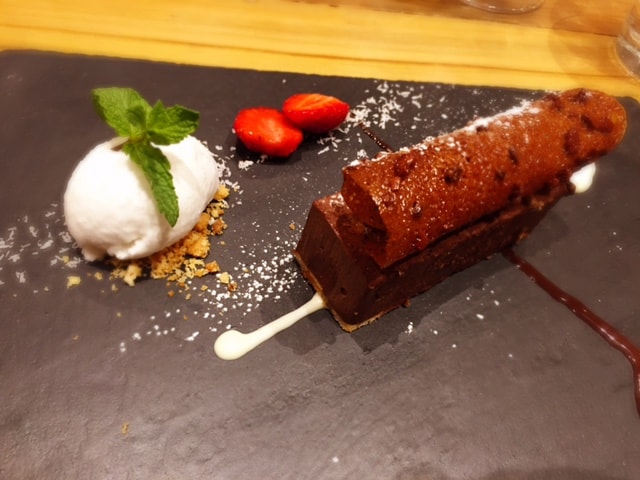 This restaurant specializes in local seafood and was a lunchtime treat. Their menus follow the seasons and use only local produce prepared fresh on site. You can’t go wrong at Le Cabanon des Pêcheurs for lunch or dinner.

If you’re feeling like Italian food, this is the place to go. I got pizza and Tom had homemade spaghetti and meatballs. Prompt, friendly service, and good food make L’Italien a solid dinner option.

How to get around in La Rochelle

On foot! La Rochelle is highly walk-able and is the best way to get into the nooks and crannies of the narrow streets. You can certainly arrive by car, but it’s best to park somewhere and head out on your own two feet. Did you know La Rochelle had its first car-free day in 1997?

Is biking more your thing? In 1976, La Rochelle launched their yellow bike service: Vélos Jaunes, which now go by the name Yélo. Rent one for the day and see the sights on 2 wheels.

Here are a couple of other photos to give you a feel for what La Rochelle is like: 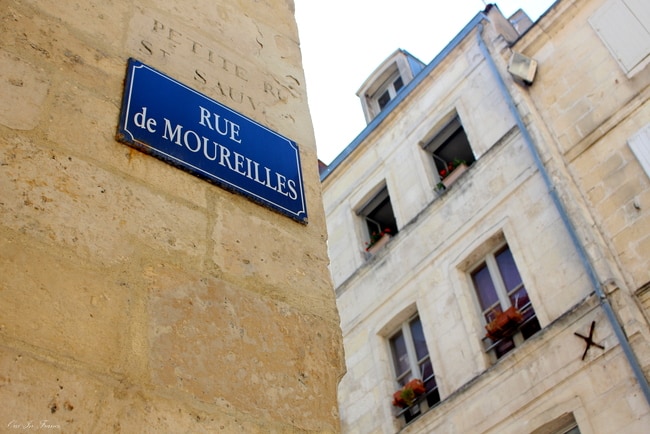 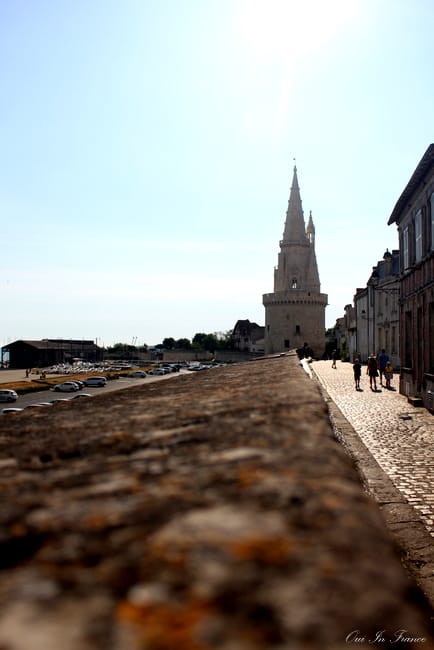 Have you visited La Rochelle? Does it seem like your kind of place?

Be sure to watch this video I put together of our visit to the Charente Maritime! You can subscribe to my YouTube channel here! 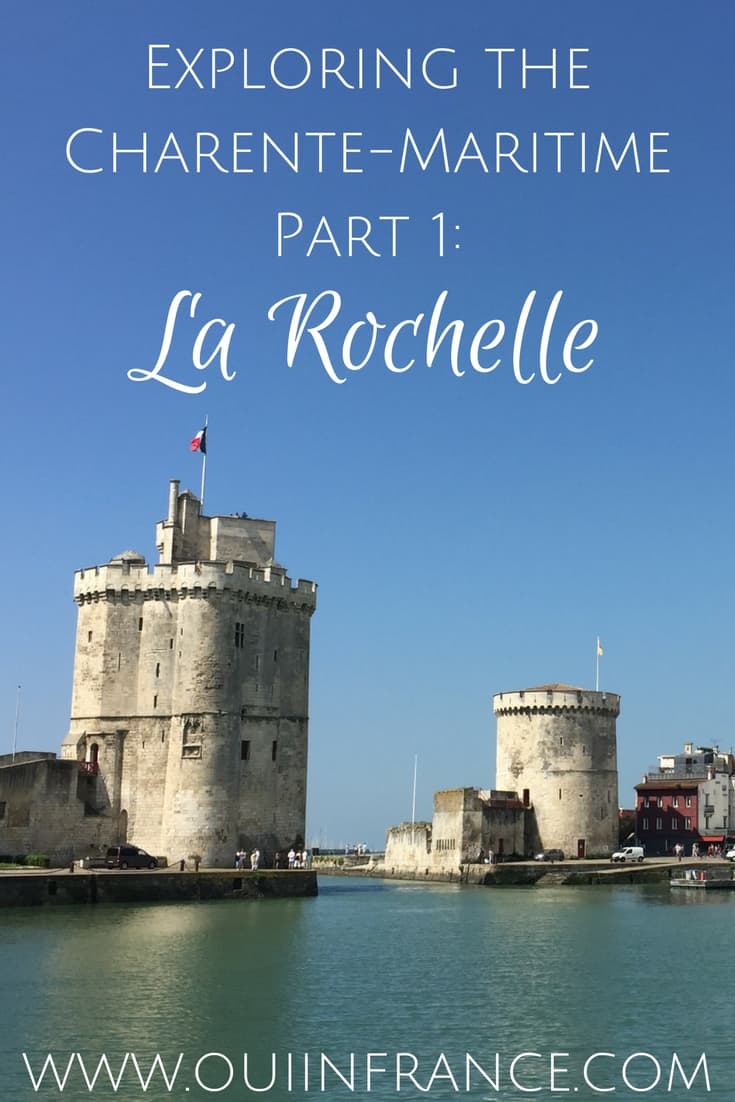 Exploring the Charente-Maritime Part 3: Marais Poitevin, mussels, and the Hermione