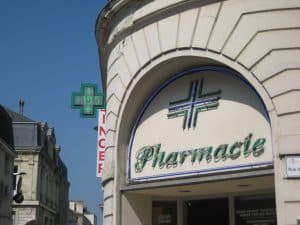 If this isn’t an awkward expat story, I don’t know what is. It all went down at the pharmacy. I’ve written about why French pharmacies rule and even about the best products, but I’ve never written about such a hilariously awkward exchange. You see, on Wednesday, I was just picking up a very regular product that turned into one of those stories you’re not soon to forget.

How did the conversation go from a normal skin cream to my vagina? Beats the heck out of me. But I will tell you what happened…

In my town, there are three pharmacies within walking distance and the one that’s the farthest away has the best prices. Wednesday morning was just like every other morning. Dagny, my trusty hound dog, and I set out for the pharmacy. We waited our turn in line behind some older women who were there for Frontline for their cats.

You see, in a French pharmacy, there aren’t privacy partitions and pharmacists don’t whisper. Everyone is OK with this concept though, except me, the American who maybe doesn’t want her illness broadcast to the entire country. But anyway, the important thing here is that everyone within earshot hears what you’re there for along with any advice the pharmacist has for you.

Differences between pharmacies in France and the USA >> 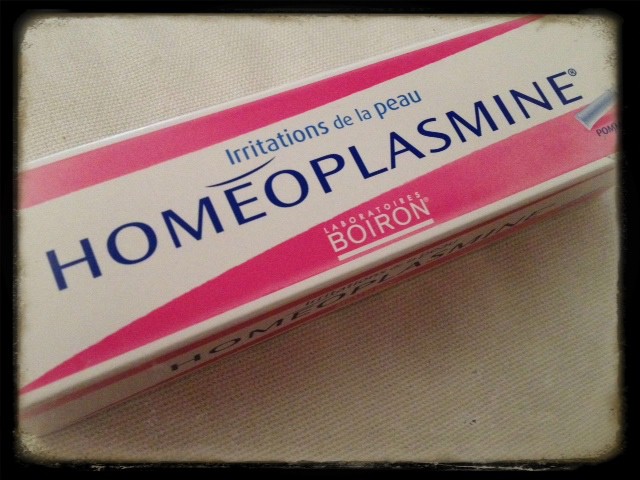 So now it’s our turn, and Dagny and I approach and ask for two tubes of Homeoplasmine. It’s an innocent cream that’s great for all kinds of skin irritations, kind of like Neosporin. It’s especially useful for severely chapped lips. This pharmacist knows me because I’m probably the only American he sees (with a dog) and because I come in once a week to buy the same products (or buy stuff for friends and family who want to try out French pharmacy wares). He makes small talk and I tell him a friend wants to try Homeoplasmine because she heard it’s great for chapped lips. “I’ll take 2 tubes, please!” This is where it gets weird.

Without blinking an eye he says:

“It’s also great for your vagina.”

No, he didn’t say for your private area or sensitive skin. He said FOR YOUR VAGINA. There were probably 500 other body parts he could have picked. Awesome?

I was stunned and just blinked at him not sure what I should say.

In that moment, a handful of smart things popped into my head but all I managed to reply with was an, “Ah, bon?” And just in case there was any doubt in my mind as to what he meant, he continues with this gem that almost made me burst out laughing. But I tried to contain myself because, unlike me, he was totally serious and didn’t see anything out of the ordinary with our fun Wednesday morning convo.

“Yeah, like if you have cuts on the vagina skin or if it’s sore.” Ok pal, you’re done. Stop right there. One more word and I may just try to make myself disappear.

Riiiight, I thought. Because I just cut my vagina all the time when I’m out walking the dog or sleeping or driving or showering.

Who doesn’t? WTF??? And yeah, I’m going to put the equivalent of Neosporin on there. That I just told you I was getting for lips. On the face. For my friend.

Here’s what’s wrong with this exchange:

1) I wasn’t buying a personal care item like feminine body wash or spray. I didn’t say ANYTHING about a vagina issue, ever, so the fact that he’d just volunteer this tidbit of information was fascinating to me.

2) The dude is in his early 30s. If he were an older man, I’d chalk it up to some old traditional pharmacist trying to offer some friendly advice. If he were a woman, I’d just think she was trying to help a fellow female out. But this guy wasn’t that much older than me. Perv? Or just a helpful guy? Am I being ageist? Should this not factor into my overall impression of the convo?

3) The fact that a regular skin cream triggered the thought of vaginas in his mind. Why does Homeoplasmine (I swear this is a normal cream like Neosporin) conjure up thoughts of vaginas??? Not sure what you do on your own time, pal, but if you know that Homeoplasmine is good on vaginas, I’m not sure I want to do the whole small talk thing anymore.

4) There were other people around who absolutely heard the whole thing or at least the words “vagina” and “cuts” and “sore.” So now the gossipy old ladies waiting behind me probably think Americans are into weird shit and have vagina problems. Way to represent. Go me!

So what did I do?

I thought of sad things so I wouldn’t laugh and then told him that I’d let my friend know that the cream will work wonders on her irritated vagina. I then proceeded to make some comments about the weather and ran out of there before I could catch the expressions on the other customers’ faces.

Let me note that for some funny reason, my French comprehension is always crystal clear whenever something strange happens. My ears decide not to hear regular things like Tom asking me to vacuum or do the dishes, but when somebody says something I wish I hadn’t heard? Well, of course I never have any issues there.

Please share your most awkward story from life abroad!

Differences between pharmacies in France and the United States