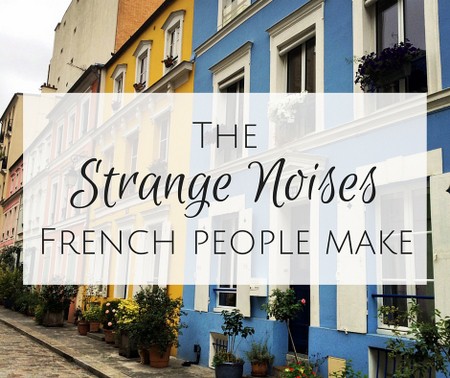 The beautiful French language — the language of love, charm and unimaginable frustration when you set out to learn it. Oh, and it’s the language of strange sounds that will leave you scratching your head. If you’ve spent any time in France or around French people, you might have noticed some of these strange noises that French people make that aren’t commonplace in the English language. And no, I’m not talking about the French “R”!

Read on for audio, explanations and a few laughs all about the strange noises French people make! 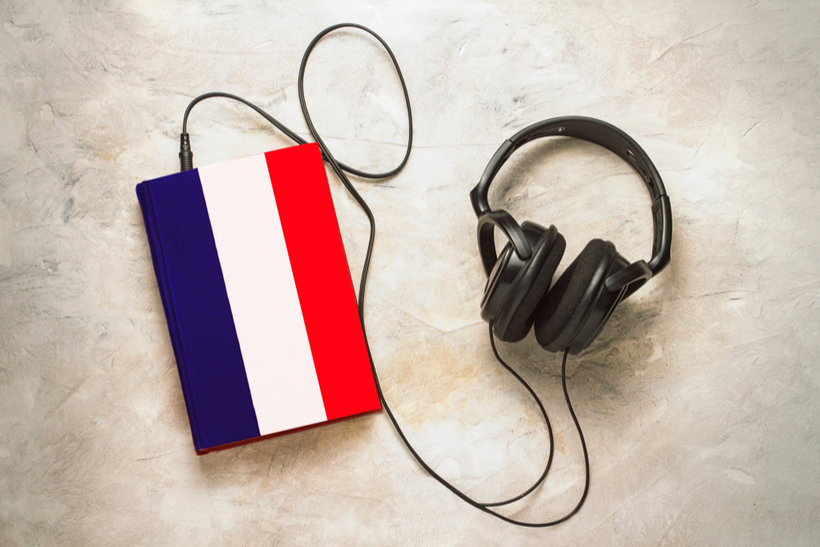 After carefully observing many French conversations and sitting there dumbfounded thinking what IS that on at least 100 occasions, I think I have a handle at this point on these curious sounds. I’m not talking about the French “R” or other sounds of the French language that are used to form words. Here I’m referring to the little conversational mannerisms that seem strange to a foreign ear yet make the French language so charming. Or charmingly weird.

At first, I barely noticed these sounds because many are subtle. I also thought these sounds were specific to the individual, but that’s not the case. While some might be regional, there are some characteristic noises that French people make across the board while speaking that don’t translate to English in the same way. And, yikes, I may even incorporate them into my conversations when speaking French!

Here’s a list of some of the strange noises French people make in speech along with French filler words. Some of them really threw me in the beginning. There are so many examples and usages, but I tried to just give one or two so you get the picture. And before I forget, thank you to my awesome voice actor, Tom.

Note: The audio clips are exaggerated from regular speech just to illustrate the sound in some cases.

(And completely random: I’m loving Everlane right now, a clothing/accessories store for men and women that prides itself on radical transparency. Check ’em out here.)

If you’re looking to experience Paris first-hand, here are the best budget tips >> 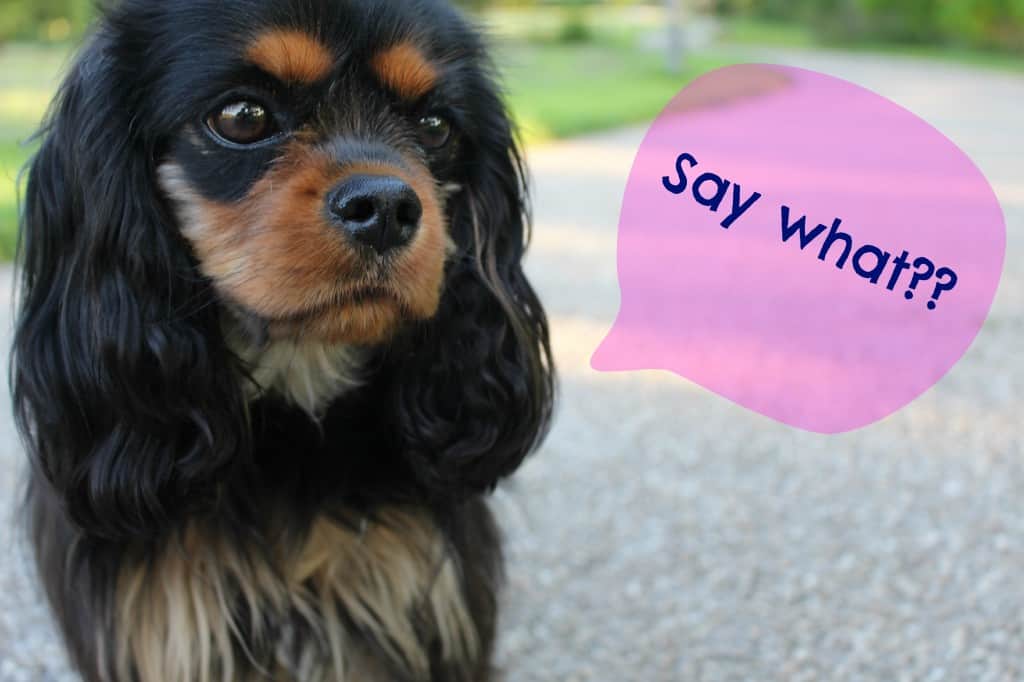 What it sounds like: A quick breath in. Almost the noise an American would make out of fear, a gasp.

This one is hard to describe, but whenever I’d hear Tom talk to his family on the phone and he’d make this noise, I’d always jump a little and say, “What happened, what’s going on?” thinking something bad happened. So to this day, when Tom’s on the phone (not w/anyone important. I shut up then.) and makes this noise, I have to ask him “OMG What happened????” just to be, well, awesome.

Way a French person uses this noise: In speech to connote agreement, the equivalent of a “uh huh, yes.” It’s to affirm what was being said and show that you agree and are following along. It’s very subtle and sometimes, every so subtly, you can year a “ouais” in the breathiness.

Example: I hate it when the bakery closes at 7 p.m. and you arrive at 6:55 p.m. to find the doors shut and the lights out.

Way an American uses this noise: To express surprise, although the American version is much stronger (louder, more startled). An example would be when someone startles you or even when you hear bad news to express shock as in “AH you startled me” or “OMG I can’t believe that happened!”

This one took some getting used to as well. I liken it to a “uh huh” or “yup” when you’re on the phone with someone but you’re not really engaged in the conversion. I hear it a lot when Tom is talking to his mom and is explaining a very detailed story he’s half listening to while watching soccer.

Way a French person uses this noise: To affirm what was being said and let the other person know you’re still there. I hear this most in phone conversations. It always seems a little rushed like it’s an interruption. It’s also pretty frequently used, so much so that I thought people were always rushing me to shut up before I realized the person I was talking to was just letting me know he/she was listening. Cultural difference?

Way an American uses this noise: We’d say “uh huh” or “yeah” to let the speaker know we are still listening. 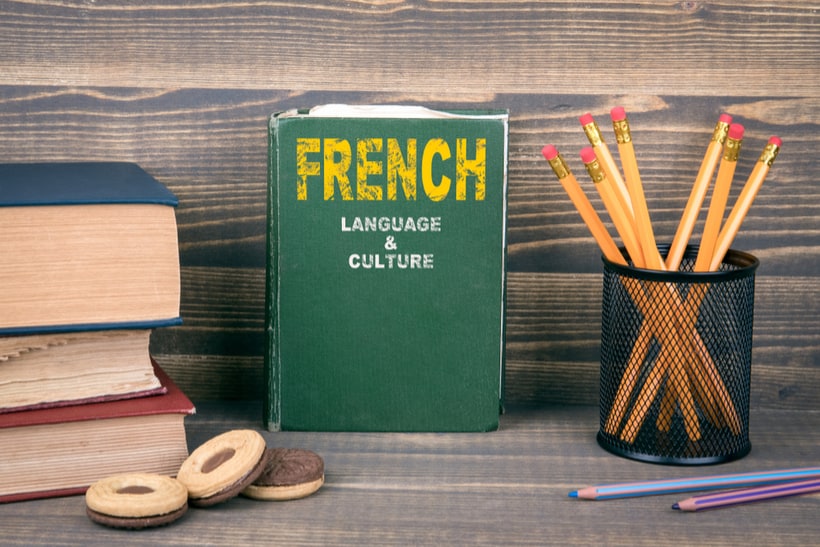 What it sounds like: The noise babies make or super classy farting noises with your mouth. Yes, I’m serious. It’s usually made with just the lips — no need to puff out cheeks or spit. It lasts just a second (no need to go overboard!).

This one means “I have absolutely no idea.” It’s handy for situations like these when words just won’t do:

Way a French person uses this noise: To say I have no clue at all. When a simple “non” won’t do. And to add some drama. It’s informal and wouldn’t be used in a business meeting with the higher ups. Used mostly in familiar settings and isn’t a replacement for every time you’d say no. Just used sometimes to add effect.

Way an American uses this noise: When we are being immature and want to make farting noises.

What it sounds like: This is one of the noises French people make that is really hard to describe and is SO common. It’s a transitional sound or a dead space filler that sounds like a slurp almost. As if you add some breathiness to your inhale. This guy on a French news program does it ALL THE TIME. And I always notice it because it’s definitely not something English speakers naturally do.

Way a French person uses this noise: Used as a transition or just to fill up silence. It seems to be popular whenever there’s a natural pause in speech, maybe a conversation ending, that may be combined with an action. What comes to mind is Tom’s mom clearing the dinner table and picking up a plate right when she was finishing her sentence. She’d make this noise when she picked up the plate. Or in the audio clip at the very end when Tom says he’s going to pick up a pen.

Way an American uses this noise: We don’t. Maybe wincing before we pull off a Band-Aid? Or bracing for something?

What it sounds like: A nice, throaty growl. Not aggressive. Usually just to show you’re fed up.

Way a French person uses this noise: To express annoyance/frustration. Like when the postal employee’s computer screen freezes and the line is out the door (happened last week), she “growled” out of frustration. Maybe also used from time to time when your wife leaves an empty roll of toilet paper in the bathroom. Maybe. But I wouldn’t know anything about that. 😉

Way an American uses this noise: Same type of sound but less in the throat I’d say.

Way a French person uses this noise: One example is when you are crossing things off a list or accomplishing a small task. For example, it’s used if you’re a sales person and you’re putting a contract down in front of a client to sign. The tak signifies that we’re completing an action.

Way an American uses this noise: This is one of the French filler words that doesn’t exist in English. Tak would be used when an English speaker would say “there you go” or “check!” to signify something is done. It’s used when finishing a small task.

Way a French person uses this noise: Equates to “there we go” or said when finishing a physical movement. What first comes to mind for me is when I first heard this sound several years ago. A dad was helping his toddler walk up a step and when he pulled the child’s arms up overhead to lift him, he said hop, which at the time, I thought was “up.” But nope.

Way an American uses this noise: Not sure the equivalent exists. An American might say “up” in the child example above.

Way a French person uses this noise: Informal way of saying “what” if you didn’t hear something. Tells the person you’re speaking with to repeat what they said.

Way an American uses this noise: I think an American would say “huh?” which is used in the same way. Just pronounced differently.

That was my roundup of all the French noises I find interesting. And again, what stands out to me is that these noises are all characteristically French. Tom does NOT do any of them in English! Although he says I have a few American sounds of my own that he finds equally amusing. Maybe he should do a guest post on that. Would you read it??

Did I leave any noises out? This is by no means an all-inclusive list and is just a starting point, so please, JUMP IN!

BIG P.S.: If you took the time to read this far and/or listen to a clip or two above of the noises French people make, would you please take a moment to comment or share? It would mean a lot to me! Thank you, readers! 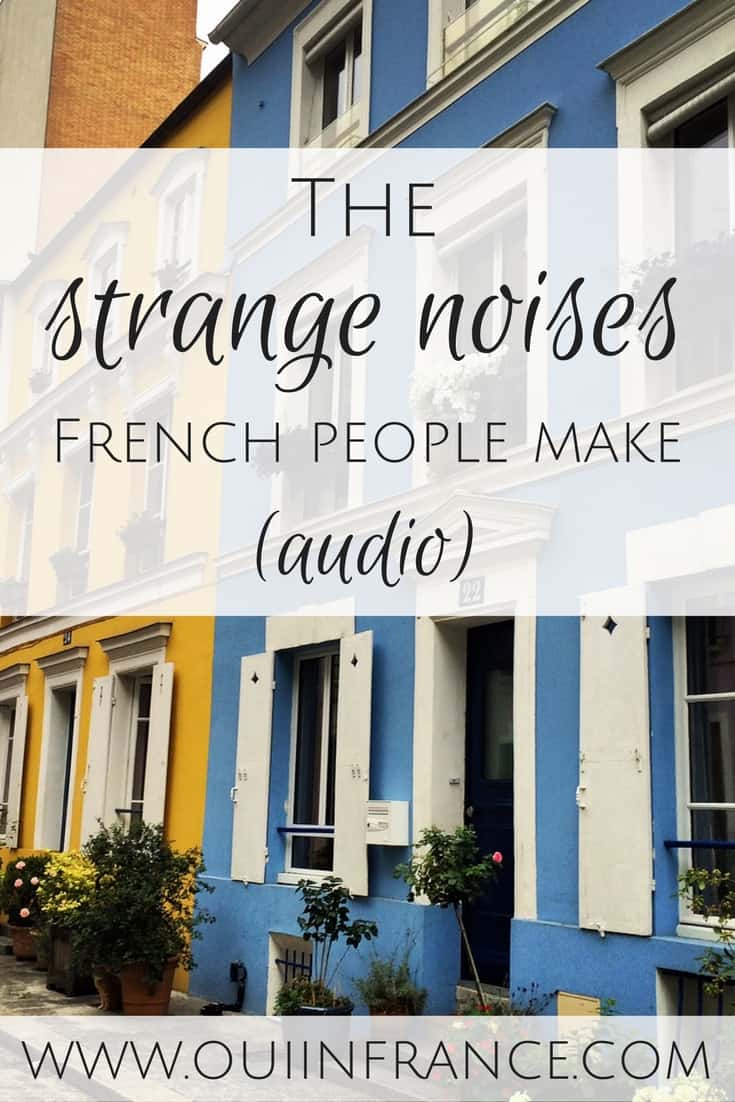